Greetings. I hope someone can help me with this. I’m working with the most recent beta version of Siril. This morning when I opened the software, the “Scripts” menu was missing. I ended up reinstalling the software. Seemed to be fine after the reinstall. Used a script to stack some data and then moved on to image processing… I’ve done it many times before… tried to do a photometric color calibration and Siril took my raw image and turned it into a nice, uniform slate gray. That’s never happened before!

I’m very new and inexperienced in AP, so it may be a simple setting somewhere, but I really have no idea about how to proceed. Thoughts anyone?

The data is waiting…Thanks in advance,
Daniel

Are the images raw files? Did you demoasic the raw files?

Can you provide more details?

How can the scripts menu disappear? It’s not the first time someone says that, I don’t understand why people have to reinstall to get it back. What OS are you using Daniel?
Share your image please to let us see why it fails.

I am running on a Mac (OS 10.14.6). I don’t know how the script menu can disappear! I use the Sirl DSLR script to stack/register all my raw data. The resulting file is a .fit file that I open in Sirl. My first step is to change to display mode to autostretch, to see what data is actually there. My second step is the photometric calibration… It is this second step that has gone haywire. Here is a picture of the initial file (before the photometric operation) and the result of applying the calibration. 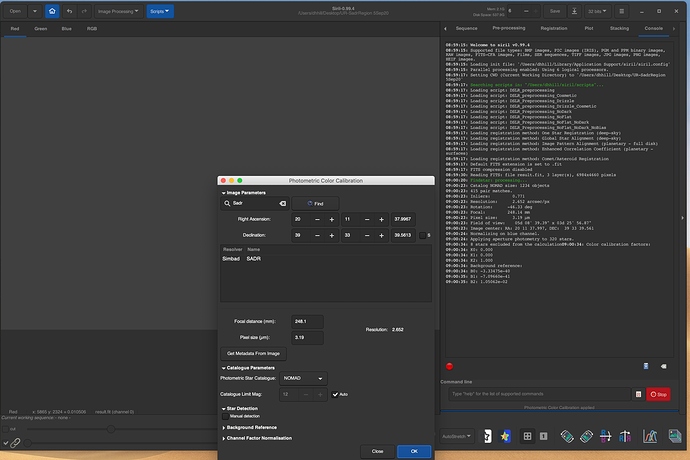 I should mention that since I reinstalled Sirl, the script names also changed back to the old ones (with DSLR rather than OSC) and the feature of putting all of the temp files into a separate folder did not happen. It is as if I am still working on the old version of the software, but with the new interface.

Thanks for all your help.
Daniel

How can the scripts menu disappear? It’s not the first time someone says that, I don’t understand why people have to reinstall to get it back.

No need to reinstall. Just to remove lines in preferences and restart Siril. This is because script directories have changed in macOS (and win too).
It is just paths to adjust in fact. No one goes there

My second step is the photometric calibration

Don’t try it. Your image has (almost) no data: just some clipped pixels as you are watching in autostretch we can see it.
You did something wrong somewhere.
Take a look to the stats.

Thank you for your help. What is the new path? I don’t see any of the OSC scripts anywhere…

Well, I’m sure it’s my fault. It always is, and probably I’ve done something somewhere that I don’t understand or know about… but I did do the following… I reverted to the earlier version of Sirl on my backup drive and used the same file and did the same two steps (autostrech display mode followed by photometric color calibration). I’d say judging from this screen shot there is data there. Not sure why the new version of Sirl can’t handle this .fit file (that it generated for me from my DNG data).

Here’s the picture (of the red channel): 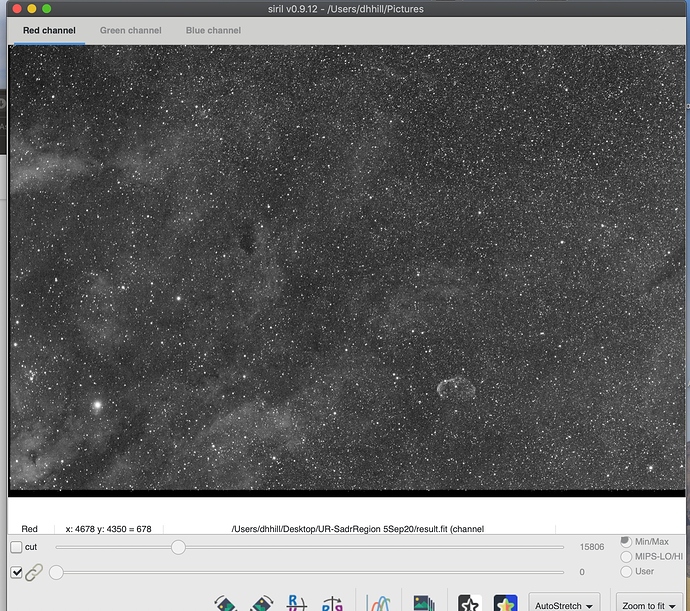 Thank you for your help. What is the new path? I don’t see any of the OSC scripts anywhere…