on the weekend I was camping in the black forest. It was a wonderful evening with no clouds in the sky. There I took some pics of the milky way with different ISO settings up to iso3200. But I already struggle with the iso1600 variant which I uploaded now.
I do all my raw editing in darktable and I already got a lot of tips and tricks from previous posts in this forum. So many thanks for that!!!
In this pic I used the denoise hint from here: https://discuss.pixls.us/t/call-to-advice-for-fighting-color-noise/3366/2

Here is my try: 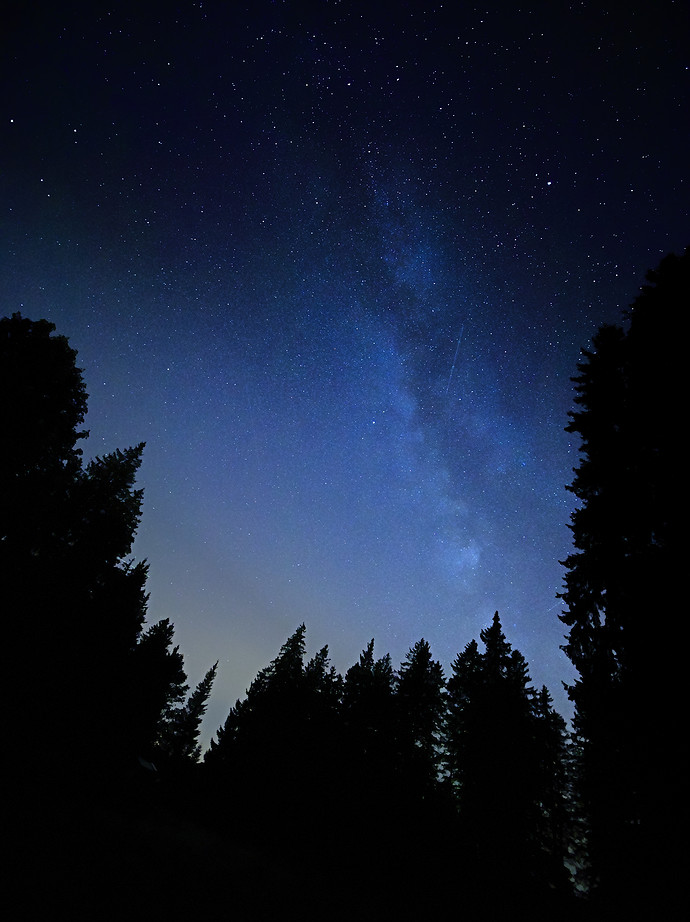 (I am often in awe at your night sky shooters)…

you made your shot blue because of the air glow you had I guess? The color of the milkyway and the nightsky is not blue. For a very good read I suggest:

I altered the color to blue as I thought that’s the right color.
But thanks to your remark I know it better now

That site is awesome ! 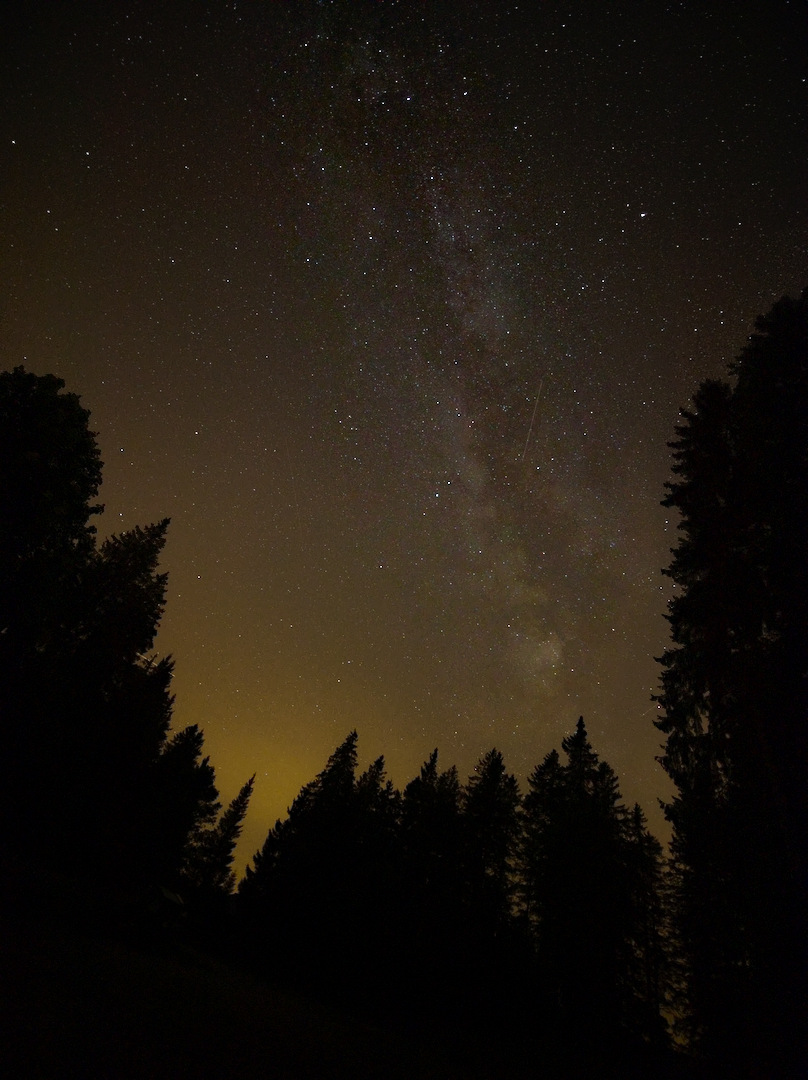 Just a quick try … Fighting the color noise is hard …

Lens correction is missing. I do not know what you have … vingetting could help to make the edges brighter. 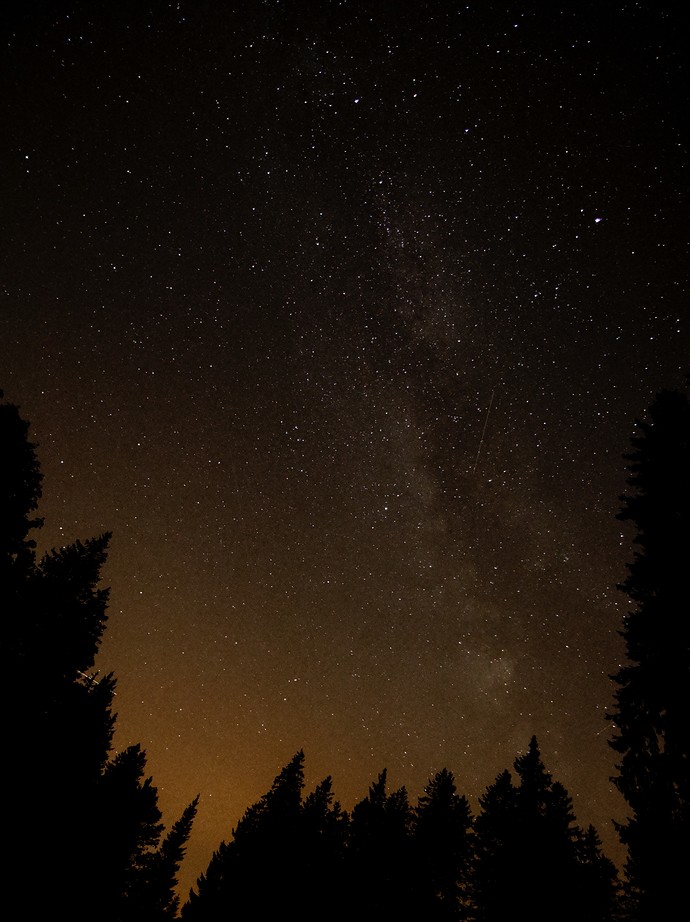 xmp is in the jpg. i think i completely destroyed all colour in the process, but there wasn’t much to begin with so maybe not too bad.

My approach uses blending modes rather than masks, if at all. No painting in, no gradients. I think night skies are actually much more blue than this, but it looks fine. Interesting post above about the “natural color” of night skies, but I think a lot of photographers get caught up in epistemic traps about what the “real” color is of what they’re photographing. Nice picture.
First, the Darktable export: 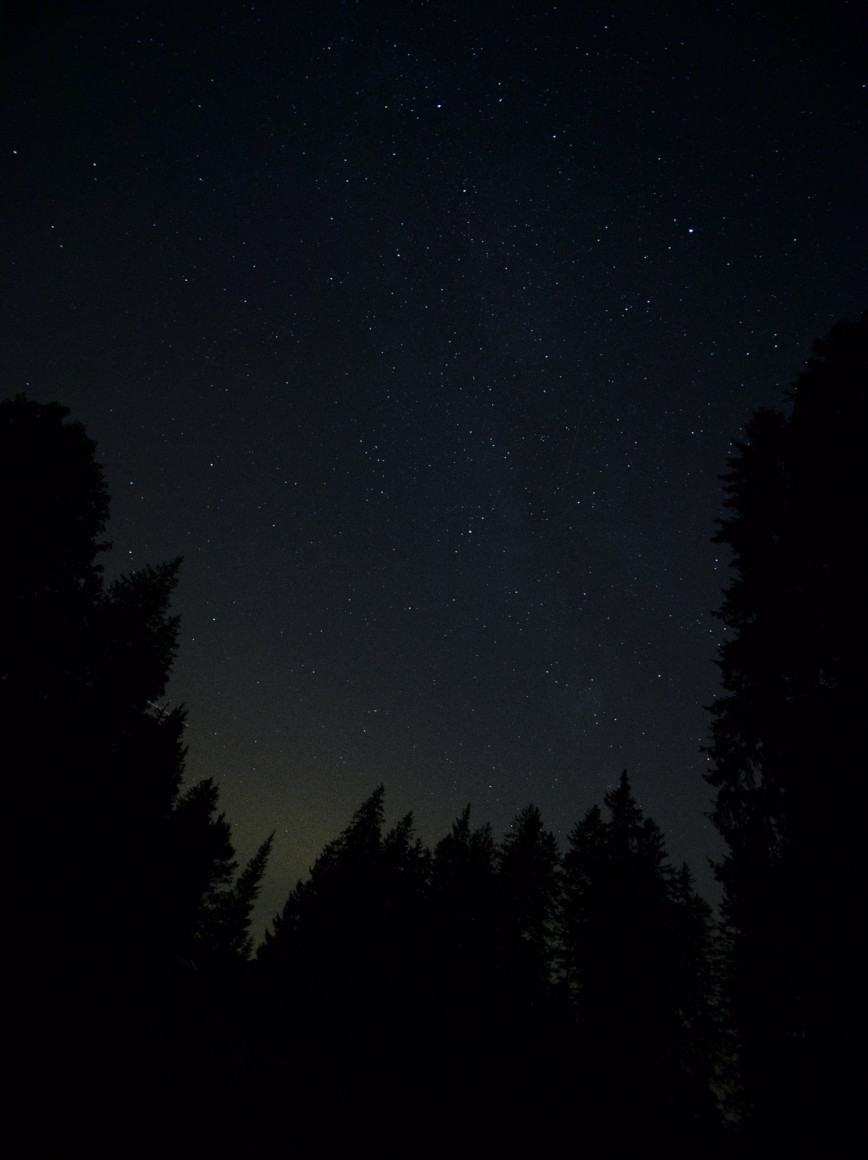 Then, the Gimp export: 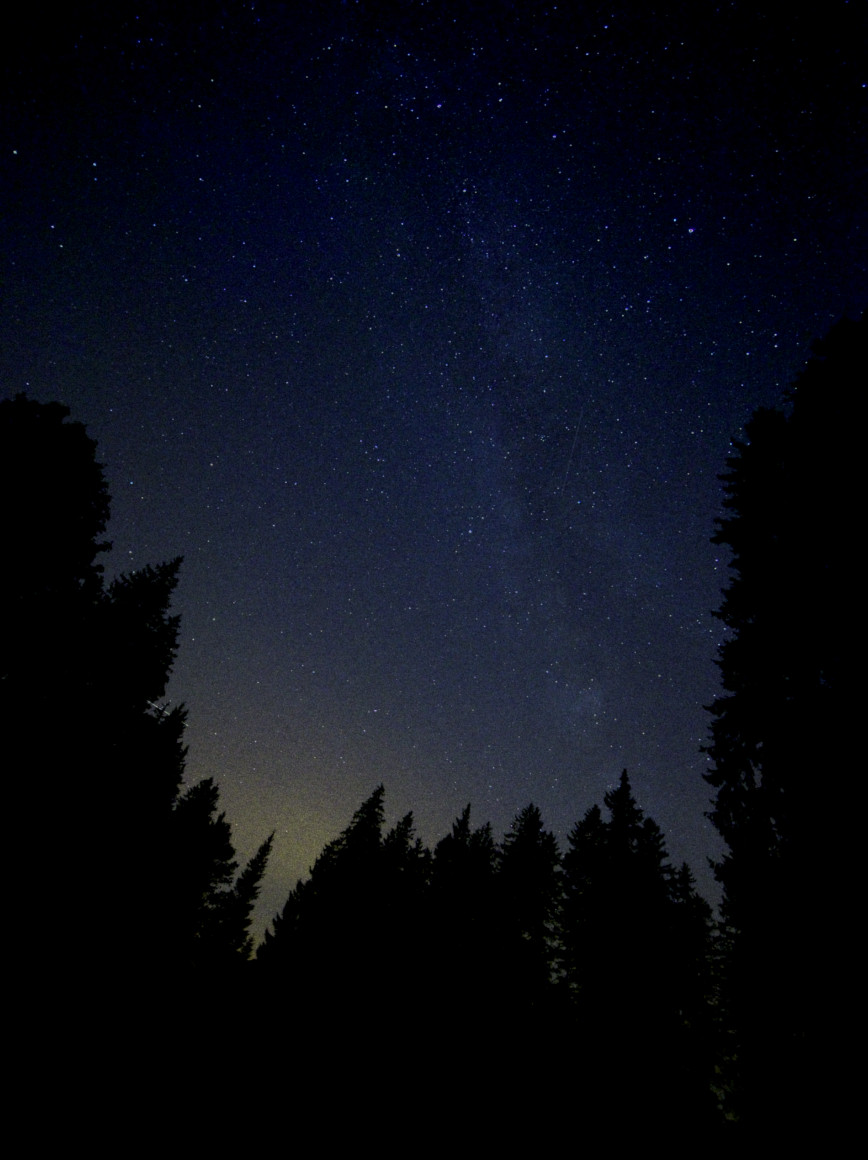 Hi everybody, thanks for playing so far!

@asn , nice version!
How did you add the xmp data into the jpg? I exctracted them using strings, grep and so forth on the command line. Is there a more simple way to handle it?

By the way, I used the manual lens Laowa 7.5mm f2. Unfortunately there is no exif data and hence no lensfun…

@hanatos , thanks for your variant, I like your crop.
Yes, there is not much color in the raw. I guess there was too much diffused light. Or do you have an idea what I could do better taking the shot?

@asn, @hanatos you both used the developer version 2.3 of darktable. I still stick to the 2.2.5 release. Is there a new killer feature in the development version?

@Andrew_Keech , thanks for your blue variant. Altough blue is not the natural color I like this variant with the yellow spot on the lower left. That’s a nice contrast which adds to the composition.
What exactly did you do in gimp?

I’ve just posted that link in another thread. Take several pictures with your lens and provide them to Torsten Bronger so they get added to lensfun.

I’ve switched to the developer version and what I like about it is the new haze tool.

thanks @wiegemalt for the starry raw and pips for sharing versions, articles & stuff 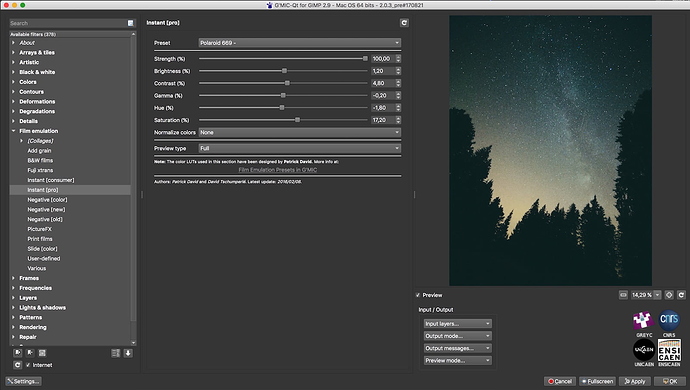 Went directly to da gimp, Partha’s build CCE. After ufraw-rised enough and rinsed through nik’s dfine, we took the lets throw random gmic’s stuff at it path, literally, and so some luma masks, purple retinex máscara blended in bland modes, and a slight tweak of Pola 669- (cross my heart)… then more stupidity channeled through more layers and more blending modes - at this point we’re on party mode, so open beers, enjoy music and try to talk to physically intelligent chicks, wipe drool

- but not happy abandon 669, embark at the online devil’s worshippers YEAHH, now this is a party!!!

Apply new pola emulation, recurved and a diffusion somethin’ sharpness… ah yeesss and a pinch of grain tweaked tmax 400 please. Export tiff, downscale through imagemagick and mozpeg to trim fat. Honestly quite a mediocre job but boy did we (this little spider and me) had a lot of fun!!! 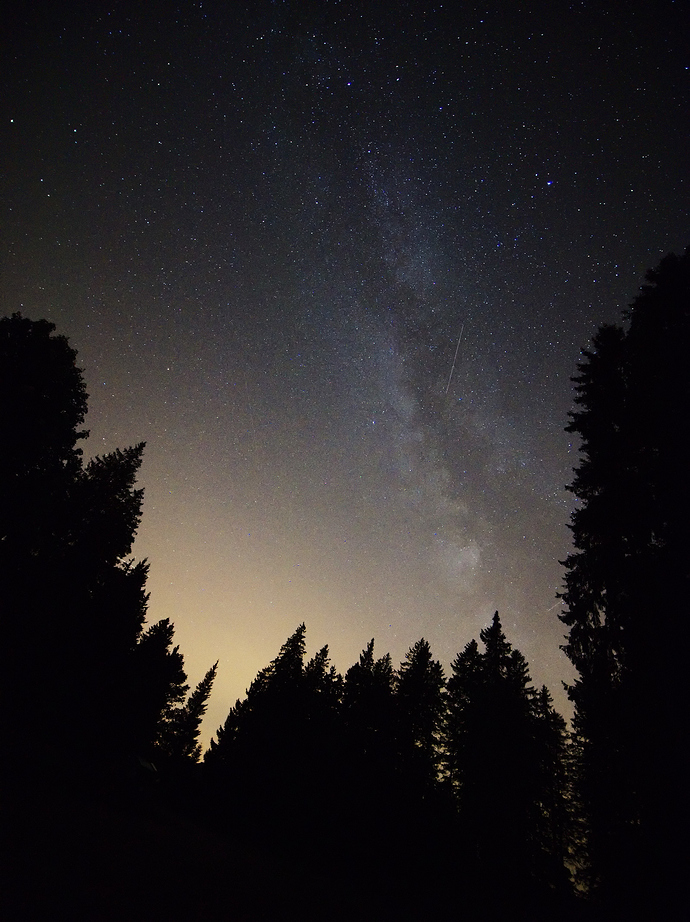 Tried my best to bring more milky way out but feel I’ve failed.

Lot of noise reduction in RT as without there were sort of stars where there weren’t any. Work on all 3 H curves to take out the street light. Bit of tone mapping and curve work in Fotoxx 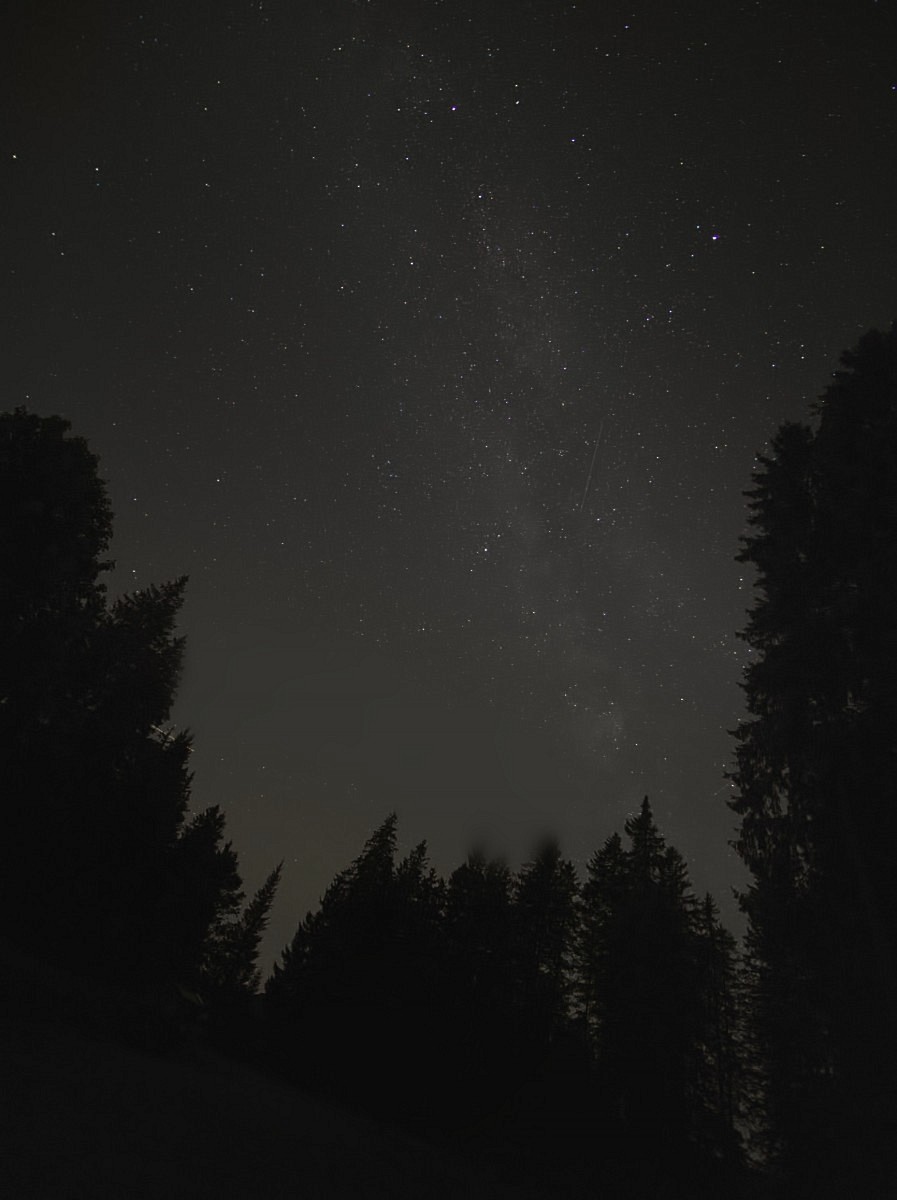 Not too happy about it.
Plus now it’s up I can see flaws were the street lighting has been removed. There was a slight sign and it looks like careless use of the blur brush.

I did keep the 2 shooting stars though.
John 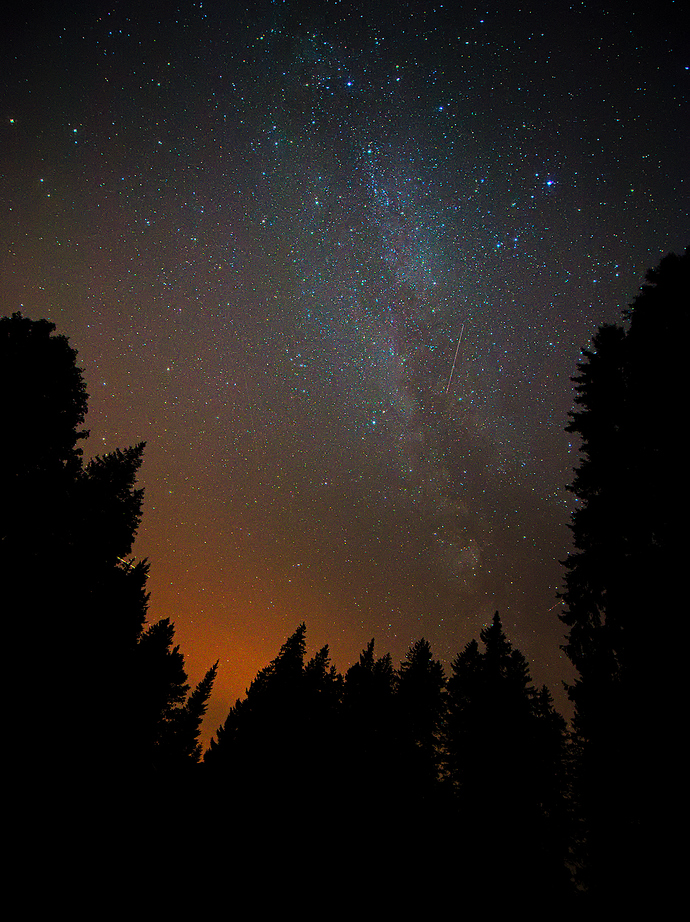 The DT setup - I do a few things which are slightly weird, like hardlight blend a coarse generated grain into the picture to try and break up the low-frequency chroma noise, color blend the exposure adjustment, linearize the base curve (because I’m manipulating the output gamma with so many blended adjustments it’s excessive), etc P8264809.ORF.xmp (9.7 KB)

For gimp, the main moves are using the 32-bit float linear format (gimp 2.9 gegl 0.3), and levels + channel mixers instead of curves (which are too coarse in adjusment and mix up the colors), and lots of blending layers. With the way gimp works, either I’m blending copies of the imported image, or various composites of the work I’ve already done (using “New From Visible”). Didn’t save the working file from last night (the challenge was just to rip something off in a few minutes) so I’m doing a super-fast workthrough again to give you an idea of how I would work through something like this. I’ll write the layers down step-wise (bottom to top), in reverse order from the way they work in gimp (top to bottom):

Sometimes I’ll do tricks like a “vibrancy” type move, where the top layer is “New From Visible” (rendering a composite and putting it on the top of the stack), blending as LCH Color and using levels to get an effect (colorfulness of bright tones vs dark tones, overall colorbalance etc can be adjusted like this). Normally I wouldn’t use such an aggressive blending mode as LinearLight because most images are sufficiently contrasty enough (even as a scan off of film) that Softlight or Hardlight work well to target certain ranges of tones or color. In this case trying to pick up the faint stars and get better differentiation from the background needed super big moves. 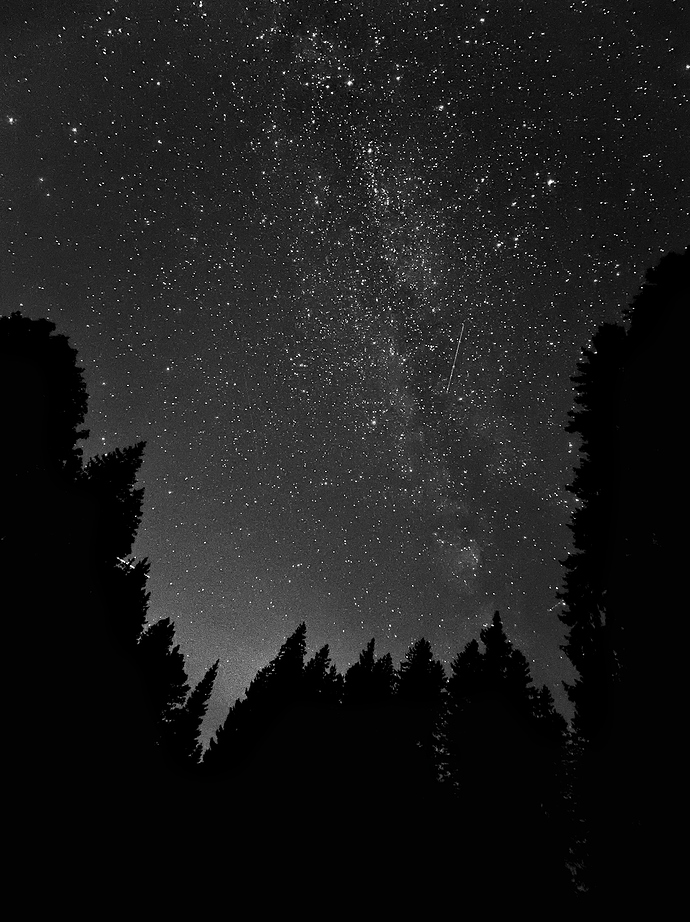 That’s a matter of taste or artistic interpretation. In @HIRAM his edit the milkyway and stars show in colors which do not exist up there. I see stars which emit green light. Take a look at the two links I posted at the beginning of the thread (The colors of the night sky/stars).

Well when you say “up there” you’re talking about everything in front of the sensor. I boosted chromaticity for a more sodium vapor horizon glow and white balanced in the middle of the sky without adjusting the hues any further. The only thing I noticed was the green/red banding and the stars’ particular twinkle, which I assumed was due to atmospheric or lensatic aberration which is not accounted for in the dcraw conversion. That’s the reasoning behind my artistic interpretation. NASA artistically interprets their own data too.
@wiegemalt Let’s hear more about the lens you used. 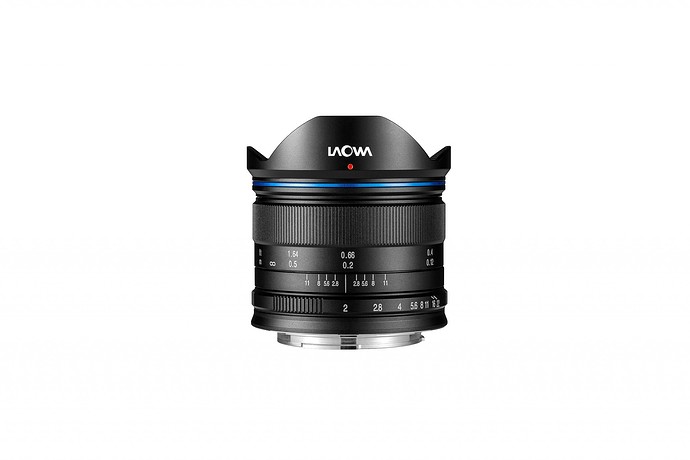 I used it with an Olympus EM1 Mark1…

@asn While I agree that there is a place for scene-referred and accurate photography, note that everything from the capture device to our eyes is subjected to decisions, assumptions and interpretation. This is not the thread or forum for esoteric discussion of this nature but I would point out that false coloration is often necessary to make sense of image data, which is not information that our eyes can perceive anyway, and that artistic interpretation can be just as valid.

That said, the good thing about PlayRaw’s is that we get to share our many perspectives and learn from one another

I would say that all of our play raw threads are about artistic interpretation and every edit submitted is a matter of the editor’s own personal taste, that is the beauty of these threads.

While the links you posted are certainly an interesting read, let’s not hijack this thread, please.