This space was created to you post your works with GIMP

Links to my Work’s with Gimp !

Welcome Anderson!
All your videos link to Facebook which I do not use.

Ah, that explains why I do not see any links at all in the topic starter, I hard block anything Meta (facebook) related.

Just as a bit of an exercise I decided to take a shot of last months visit to Tel Aviv’s Neve Zedek neighborhood, a very artsy fartsy place - only issue I always have there are the power lines which are simply unavoidable in that neighborhood - I hate power lines in my images with a vengeance!

Usually, the heal selection script with the resynthesizer plugin work their wonders but you can clearly see that was not an option here.

With some painstaking perspective cloning, layer copies, bits and pieces of other parts of the shot, I removed the power lines. I would not recommend doing this on an ongoing basis, it is utter madness and costs hours in Gimp! But feel free to flip between the versions! 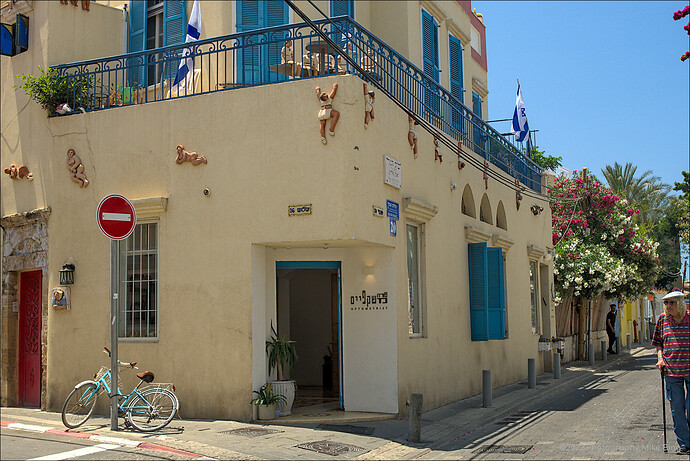 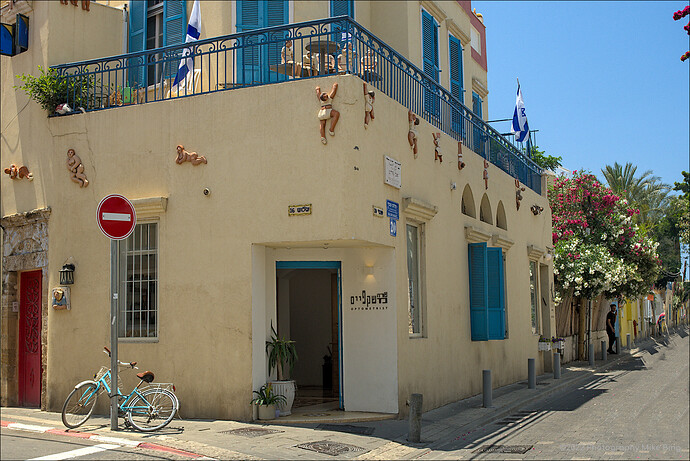 I know from experience that doing stuff like this is indeed a long, painstaking process and mistakes/tell-tales are easily created. Done right the end result is more then worth it, though.

Only if I zoom in and start searching, knowing stuff has been altered, do I find something that doesn’t seem to be right: There are 2 identical shadows behind where the man used to be that seem to be pointing in the wrong direction in regards to the sun’s position and other shadows.

I suppose I had spent so much time on recreating the little figures on the roof’s edge and between the railing that by the time I got to the pedestrian I got sloppy. I removed him because he was only half in the image. Cropping makes more sense.

That part of the image is up for a re-do indeed. Lucklily I saved as an XCF with the original image as bottom layer so I can just pick it up again.

This was more of a general exercise than an absolute necessity. Like a challenge more or less because of all of the missing info and pixels. Power lines against a blue sky or even-colored wall are no issue anymore so this seemed like a fun job.

I removed him because he was only half in the image. Cropping makes more sense.

This was more of a general exercise than an absolute necessity.

You’re probably right about the cropping, but this is a great image to practice on: You’ve got everything from easy to rather hard to fix/remove.

The longer you look the more things you start noticing in the second one. Most related to around where the man used to be