Hi ! This is my first post here.
I am learning dartable for less than a year, but i couldn’t find a way to reach the sharpness of the Out Of Cameras JPEGs…
I tried with “Sharpness” and “Contrast Equalizer” modules (single or multiple instances) but i never got a satisfying result. My pictures always have that blurry look, especially on small elements such as hair.

Most of the time this is not a problem, but I sometimes used a crop JPEG instead of a crop RAW just to avoid that.

How do you do to sharpen your images, and how do they look compare to the OOC JPEG ? (in term of sharpness)

If we disregard the fact that many OOC Jpegs are clearly overcooked
(because that is what the manufacturers believe that we want) — so
far I have always managed to develop my RAFs in a much better
way than the OOCs. (At least that is what I think!)

What camera do you use?

Is your problem also visible when you use tripods/cable release/timer
and very short exposures?

Try out these settings for the contrast equalizer and 2 instances of local contrast, then adjust to taste. 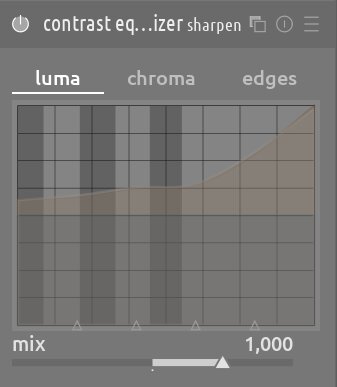 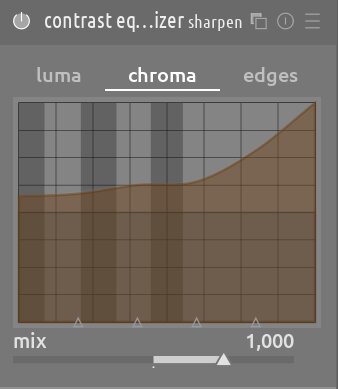 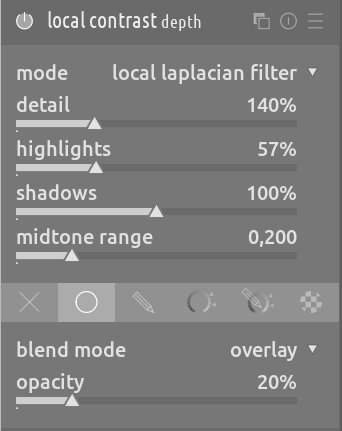 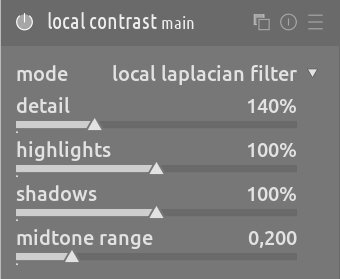 Thank you very much for your answers.

@Claes : yes I do agree that OOC Jpegs are not what I want but, when it comes to small elements (hair or skin details) they are closer to what I expect (they elements appear thin, at least way thinner than in my RAW).
My Camera is a Sony A6000.
Even when i make sure there is no movement blur I notice this problem… And even if there is a small blur, shouldn’t the RAW development should reach JPEC levels ? (I mean, even if it’s too much, I don’t know how to achieve it).

@subliminal thanks for these settings. Even if I do find the result good in term of contrast, it feels that it doesn’t improve very small elements…
When you say “adjust to taste” : what exactly do you adjust ? I assumed you talked about Contrast Equalizer’s curves, as this is the module I found to have the most impact on the final result.
I tried to follow this tips : Up close and personal with the color balance module: An experiment. - #22 by Jade_NL but I never reached something “balanced”.

Contrast equalizer - try increasing the contrast in:
Node 4 (the 2nd one in the middle)
Nodes 5 and 6 (the rightmost ones)

Increase local contrast detail levels even further… in the 2nd instance (“depth” on my screenshots), you can crank up the detail all the way to 500%, highlights and shadows to 200% then control it with the blend mode opacity slider.

By adjusting to taste, I meant avoiding halos and oversharpening. The mix slider in the contrast equalizer is useful for reducing the overall effect. You can also play around with the midtone range in local contrast.

Another thought: what ISO setting did you use? 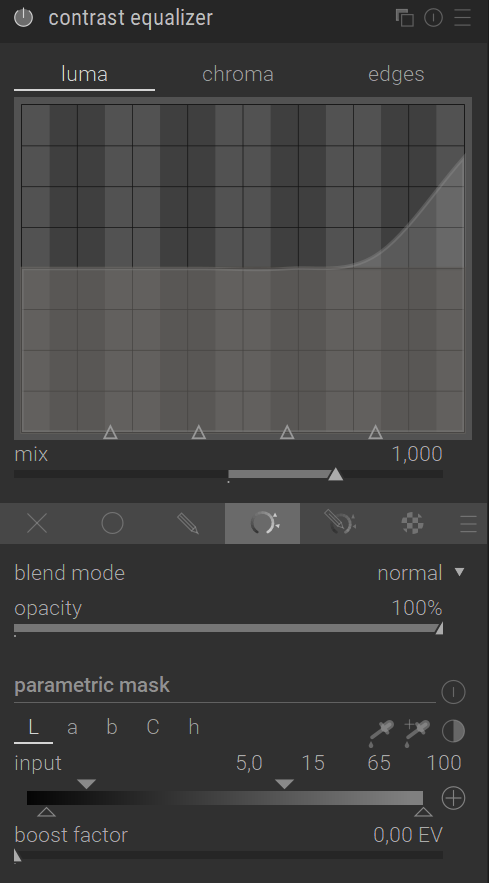 or this (which I find a bit too aggressive) 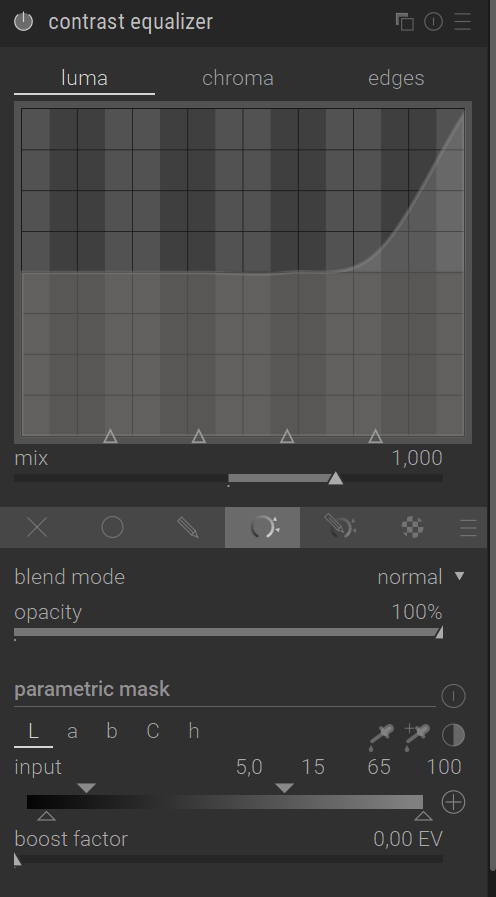 Consider that most jpgs produced by raw developer SW, including the camera SW I guess, are treated with output sharpening. That can be useful, especially if you resize.
Unfortunately DT does not have an output sharpening module.
However there are some lua extensions for the purpose, you can try my script RL_out_sharp for example (if you use Linux or Windows). 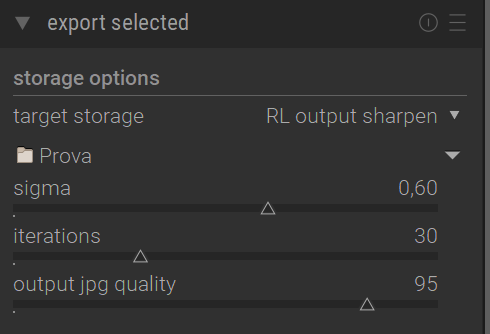 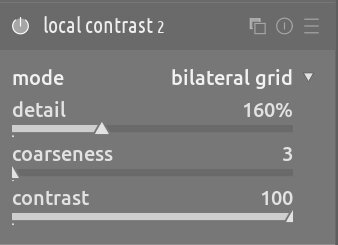 This is a surprise to me. My DT jpg has always more details that my OOC jpg (partially due to strong denoising done by a camera).
What is even more strange, is that I get best results with local contrast and … sharpening (radius =1, amount =2). For me, it is still better than what I get when using contrast equalizer, even though my camera does not have AA filter.

this is pretty much exactly what I do, sometimes even less, and the images are extremely sharp IMO.

not just with my camera and lenses, but with most of the Play Raws I do too.

also worth noting for @Baibomo though is how you are delivering the images. My workflow begins in darktable and I sharpen with the contrast equaliser as above, then I export a full resolution tiff file that I open using GIMP, resize down to 2048 pixels on the long edge for the web, then apply the Constrained Sharpen plugin in G’MIC at a very low amount setting (default is 2, often between 0.8 and 1.2 is plenty), followed by adding grain in G’MIC (TMAX 400 preset set to overlay blend mode).

for printing it would be a totally different ball game.

First, thank you very much for all the answer you gave me. I now have tried a tone of thing, and even if I’m not yet satisfy with what I’ve done, I did improve a lot.

First, @Claes gave me a hint : ISO can have an impact and denoising ! I worked a bit on this part and this helped improve the results. It sounds obious, but I clearly neglected the denoising part while I was trying to improve the sharpness. This was a huge mistake.

Also, thank you for the settings you gave me, @MarcoNex and @subliminal. I personaly find the local contrast to be a little too hard for sharpening. But Contrast equalizer performed well, and I learned a little bit more how to use it.

For now I do not have a specific workflow, and I’m quite a newbie : I only check from DT how the sharpness feel (and I’m doing it at 100%). Print may come later.
I only try to train and get better pictures.
@MarcoNex : thanks for the script, I don’t think this is my issue right now, but this could become handy.

Still, I do find my images look fat (which is not exactly blurry, but I don’t have the correct term).
Anyway, maybe you can play on these images. No matter what I’ve tried, I never reached something comparable to JPEG (at 100% !)
DSC09835.ARW (23.9 MB) 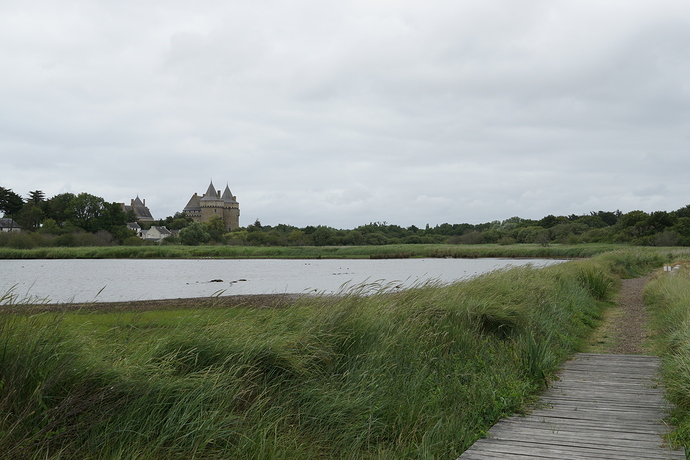 These images are under Creative Commons Attribution-NonCommercial-ShareAlike 4.0 International License 1

Hi @Baibomo,
As usual: there are half a million ways to develop an image.
Here is my version: 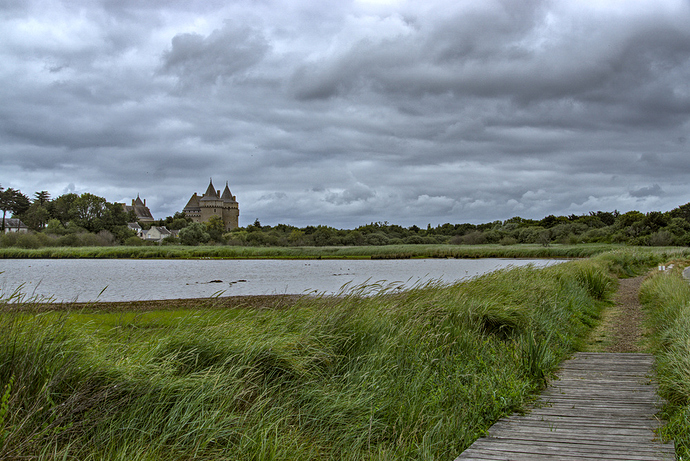 Perhaps haze is the culprit. Use blend modes multiply and overlay to bring the colors back to life, along with the velvia module. Color grading also affects our perception of contrast and overall sharpness. Channel mixer destination gray, blend mode HSV lightness with a lesser emphasis on blue (even entering a negative value) can bring out the sky even more.

The usage of parametric masks to divide the photo into 2 zones - ground and sky can help a lot with selective exposure and / or other adjustments. Think of this approach as a simplified tone equalizer.

Also, you can use the Color Look Up Table module set to Fuji Provia emulation with blend mode normal in the range between 50% and 100%, as it gives interesting colors for landscape / sky photos.

Perhaps it will be useful to create various “starter packs” for newcomers. 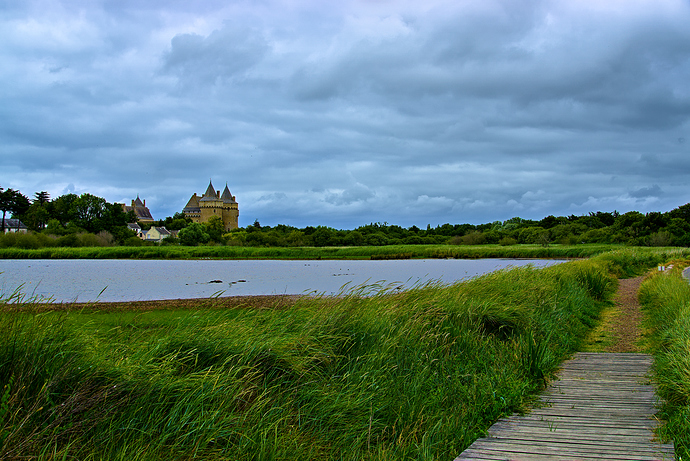 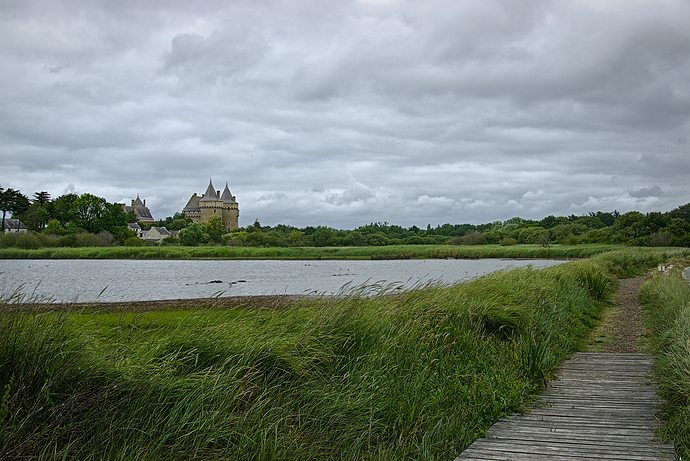 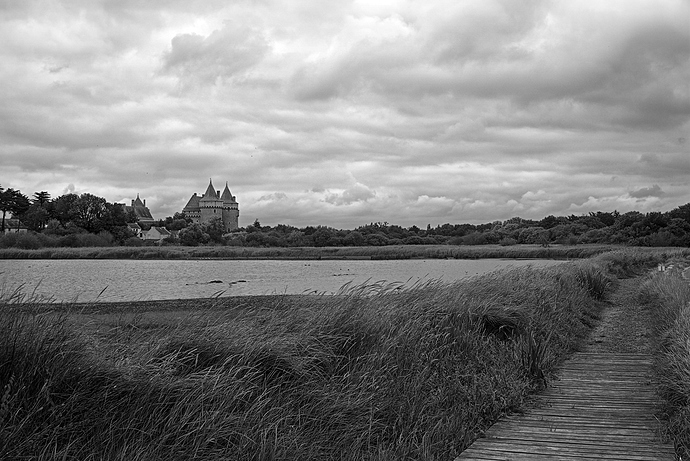 Once again thank you very much for the time you take to answer me, you are amazing !

I don’t know if i’m going too far on that and I start to feel picky… But when I zoom at 100% on all edits, i still find the JPEG much more sharp. Perhaps my perception is just biased, what do you think ? :
(of course, no one would ever zoom that far, but I take this as an exercice) 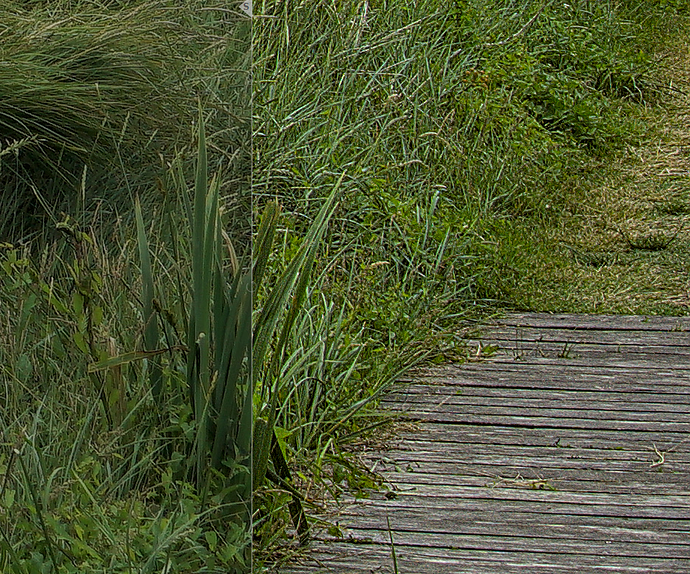 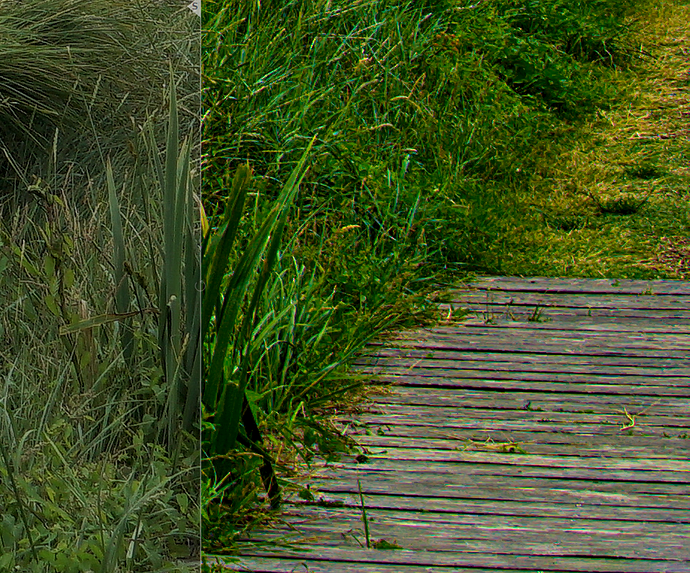 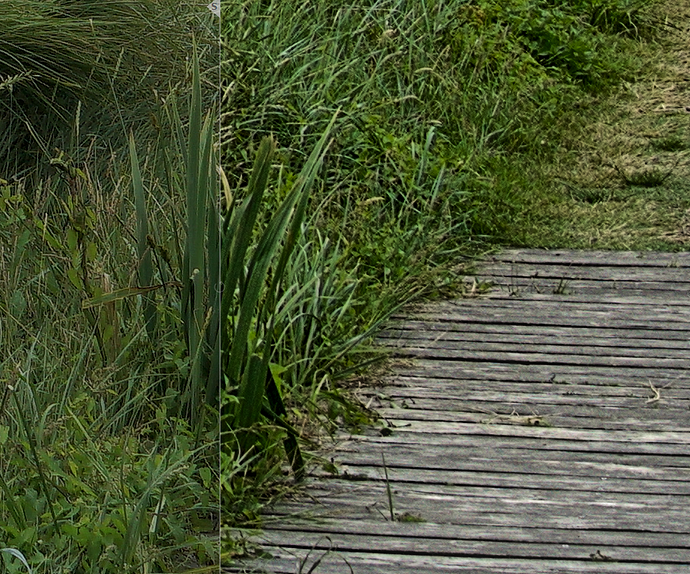 (left/snapshot is JPEG, right is RAW)

Maybe this is not about sharpness… I don’t know

Zoom to 200% while denoising then apply just the right amount, and not more, as it affects sharpness quite a lot. Use the sky as a guide. 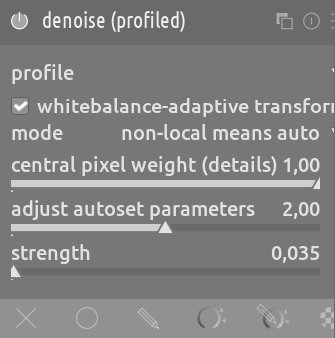 Add a new contrast equalizer instance, then try out the deblur presets, namely, the deblur: fine blur, strength 3. Keep duplicating that instance if you need even more sharpness.

The issue you are encountering here might have to do with demosaicing.

darktable has 3 ways to increase acutance (contrast equalizer, local contrast, sharpness) but no way to increase sharpness (that would require deconvolution, which is an iterative and slow process). Yet. (I have been working on deconvolution stuff for dt for 2 years now, runtimes vs. quality are still a big limit). All the examples above show inacceptable amounds of haloing between sky and trees.

Anyway. Take it from a guy who spent hundreds of hours tuning blind deconvolution algos, people are a bit too obsessed with sharpness. Zooming 1:1 on a 24 Mpx is not really reasonable.

Here is what I got, using Amaze demosaicing and various tricks: 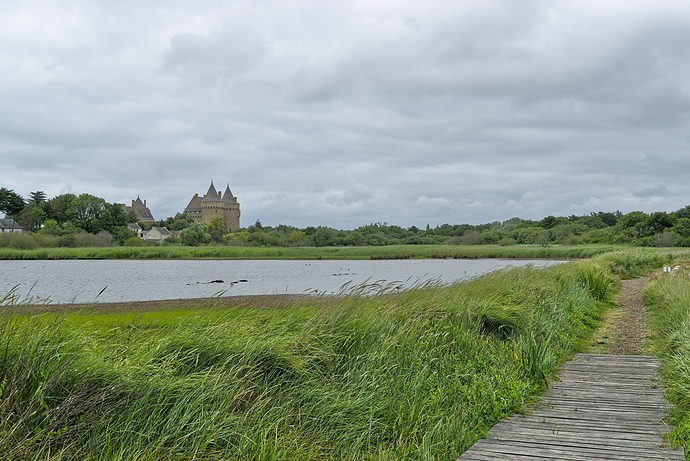 If you haven’t already, it would be worth trying out RawTherapee. For deconvolution they have both Capture Sharpening and RL Deconvolution, as well similar tools to those found in darktable, such as Local Contrast and Contrast Detail By Levels (Contrast Equaliser), plus others. They also have a large range of demosaic options, which effects image detail. I would post an example of what can be done, but am unable right at this moment.

Thanks for your inputs @anon41087856, this clarifies things.

I now 1:1 is not good, my point was to understand why JPEGs looks, in term of sharpness, better than RAWs. But I guess that solves it.

Thanks for your edit. Unfortunately I couldn’t open it completely (dt 3.2.1 filmicrgb version 3!=4).
I still got the idea of what you did : stacking contrast equalizer was sugested before and I kind of understand why.
But what is the point of having two tone equalizer ? How does it deal with sharpness and why did you move one of the instance before input color profile ?

@Soupy I never tried RT, and perhaps I’ll give it a try. But except for sharpness, I find darktable very powerfull. Also I don’t want to lose my current edits or have two softs as i’ll confuse myself at some point. Yet, I’m very curious to see what it can do ! Maybe I’m biased and I’ll find RT to fit my needs.

(also at some point @anon41087856 deconv module may do the job! These things take time and I can wait)

EDIT : I meant why did you move one of the instance after input color profile ?