Since I do not want to hi-jack the original Red monster thread,
I start a new one.


Oh yes, I do understand @Soupy’s dilemma.
I have a simple red rose outside the bedroom that
simply refuses to cooperate.

What would be the best approach to expose such objects properly?

I’m not at all sure that this is an exposure issue.

I think that a reasonably good modern digital camera is able to capture this without much problems. The status of the hardware we use to show images in their full glory seem to be out of reach (technically and/or financially).

The best monitors that I know of are 10 bits wide gamut. I’m not technically proficient enough in this area but I do believe that not even that is enough to correctly display all the info that a (very) good modern digital camera can produce.

I do hope somebody proves me wrong and points me to a, somewhat, affordable monitor that can handle modern RAWs in all its lustre.

It was already exposed perfectly. Observe the raw histogram, which I showed in my post.

With Filmulator (this is its specialty): [DSC_0134-output] Exposure Compensation -1 1/3 Drama 72 White Clipping Point 0.7 All the data is there; the raw histogram is perfectly exposed: [Screenshot_20210318_081016] Some of it may be technically out of gamut but as long as it looks good with no harsh transitions…

The problem is that the camera histogram is utterly useless for evaluating overexposure on things that are not white or green.

I generally assume that with daylight white balance, a solid red subject has two stops of headroom, at least with my Canon cameras. 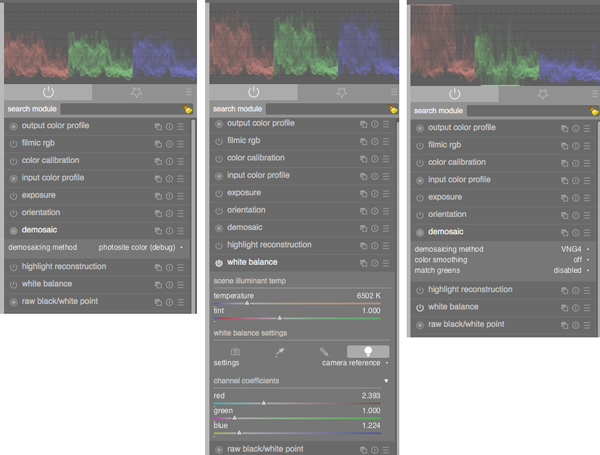 The red channel overexposure is only post-demosaic, thus easily fixed in raw convertor by reducing exposure (this was the bit that confused my edit, as in dt workflow it is so rare I will ever have to reduce exposure), as the data is there. Instead of doing it in post, you could do what Carvac suggests and leave two stops of headroom, but wouldn’t that produce a slightly noisier image? If you wanted a nice OOC jpeg, that is how it would have to be done.

The best monitors that I know of are 10 bits wide gamut. I’m not technically proficient enough in this area but I do believe that not even that is enough to correctly display all the info that a (very) good modern digital camera can produce.

Do the bits matter here? I thought this was purely a gamut issue, and the only way to see this image properly would be on a wide gamut monitor. My understanding is that the main benefit of higher bit monitors is greater clarity around banding. That is, if you see banding in an 8 bit monitor, you can’t be 100% sure whether the banding is in the image, or due to the screens lack of bits to display the gradient properly (which would be extremely rare, as 8 bits is fine for 99% of real world scenarios). But if you have a 10 bit monitor, and see banding, you can be sure it is in the image, not the screens lack of bits. How wide does a gamut have to be before 10 bits starts becoming a requirement? I am looking to buy a new monitor soon, and I will be prioritising gamut size over number of bits. True 10 bit monitors (not 8 bits + 2 bits dithering) are probably priced out of my range anyway.

leave two stops of headroom, but wouldn’t that produce a slightly noisier image?

I advocate the opposite: make use of the headroom by exposing to wash out the jpeg.

Your impression of bit depth is correct, but not in the context of an HDR monitor.

I’m not sure that a wider gamut monitor would help at all; you just need a monitor capable of a wider brightness range.

Do the bits matter here?

I am under the impression that a wide gamut monitor is always 10 bit (or better). I automatically assumed that the bits would matter. But like I stated before: My tech knowledge isn’t up to specs in this case.

I am under the impression that a wide gamut monitor is always 10 bit (or better). I automatically assumed that the bits would matter.

When Adobe RGB is “wide gamut”, then there are monitors that only have 8 bit output. 10 bit per chanel is important for the gradation but seems not to be important in this case, which is mainly gamut related.

When Adobe RGB is “wide gamut”

You are correct, of course: It is wider than rc709, which seems to be the measure, but for whatever reason I don’t put adobaRGB into the WCG range (rec2020, ProPhoto: Yes).

But the answers given above clearly point out that this isn’t a X bits is important issue, which I assumed. Thanks for clearing that up!

It might be interesting to know that this is a semi-old problem.
Here is what I wrote five years ago. In those days, it was yellow petals
that were problematic… They probably still are.

How to treat yellow petals? Processing

It may sound odd, but I have problems with flower petals. Imagine a yellow crocus in the morning sun, having a few dew drops on top. It seems as if it does not matter how careful I am with exposure – the red channel still is grossly overexposed, especially at the top of the flower. What would be your recommended way of processing in such a case?

@Claes: It definitely is an old issue and you see it in the red/orange/yellow range and flowers seem to particularly like to mess with you in this regard

Have plenty examples lying around that made for interesting editing moments…

BTW: The filebin link expired in the old post. Any chance you can upload the RAW here again? I’m asking 'cause I’m curious to see how Morgan tackles that problem.

In those days, it was yellow petals that were problematic

After I replied, they went back outside and checked, and found that the Filmulator colors were actually closer to the real color of the subject.

Er… it is deep down in the archives.
I’ll have a look.

I’ll have a look.

That would be appreciated!

It is, until that time in the distant future when rec 2020 monitors become common place. Then Adobe RGB will be “narrow gamut”. It’s all marketing

It might be interesting to know that this is a semi-old problem.

Indeed! For the majority, monitors have still not caught up.

Have fun!
Claes in Lund, Zweden

It was tricky to find that old .RAF

Thanks for the time and effort, much appreciated.