Rotate a RAW image by a fraction of a degree in RAW conversion?

Is it possible to rotate a RAW file by 1/10 of a degree in the RAW -> TIFF conversion process?

When shooting with a Monopod, shifting the camera a fraction of an inch to the left or right between frames results in a tiny angular displacement, frame to frame as the camera actually rotates about the foot of the Monopod.

Is there any way to rotate a second image to match the previous image in a burst if the rotation is something like 10 pixels across the frame?

If you simultaneously increased the resolution by say 3X per axis, the stair step pattern could be largely ameliorated.

It is possible to fit a continuous surface to an area containing a discrete number of pixels and then read the surface at a slightly displaced, rotated point.

I would rather find existing software which can do this, but writing from scratch is not out of the question. It could be a real programming adventure!

I can’t speak for RawTherapee specifically.

If the camera rotates about the base of the monopod, we might have a twisting motion (rotating through an axis from the camera to the monopod foot) or rotation through another axis that also causes camera translation.

A twisting rotation is quite simple, and a perspective transformation will fix it.

A camera translation will cause occlusion problems: a foreground object will move with respect to the background, revealing some background and obscuring other background. This is more difficult to fix.

I’m confused about what you’re looking for, but RT can do this: 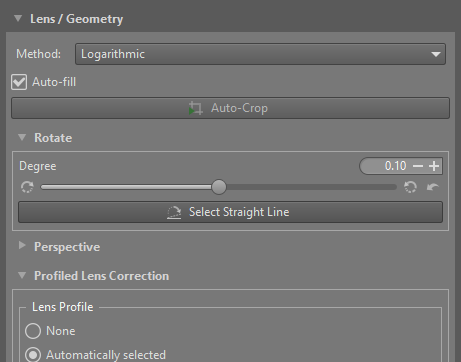