Running darktable in a virtual box fails (yes, I know it's not necessary).

Given that there fully functional versions of dt 4 under both Linux and Windows this error is probably not worth worrying about; I mention it only for passing interest. I tried it to validate my plan to eliminate my Windows computer entirely and run just the 2 key windows apps that I have in a virtual box under Linux. Are there other things I should be thinking about ?

If darktable is a key app , you should run the Linux version , not the windows version in a virtual machine

Darktable switched to another way of building the windows version (although i still use the old way ).

There is a pretty good chance that a fresh windows install requires certain runtime libraries to be installed as well.

So try install visual c++ runtime installeren , although i wouldn’t know which version that build would require.

Pretty good chance that a supported version of win10 or win11 already comes with the required dependencies , or detects if they are required and pulls them in through an installer or windows update anyway.

If darktable is a key app , you should run the Linux version , not the windows version in a virtual machine

No it isn’t, in the sense that I meant it in my original post - i.e. an app which will run ONLY in windows. But I should stress that darktable is the most important of all the apps I have; I run it in both Windows and Linux versions -but predominantly in Linux.

I take your point about requiring runtime libraries: my initial attempts to run dt in a VM tyold me that a dll (api-ms-win-crt-environment-11-1-0) was missing. I saw 2 methods to correct this: download the dll directly or install a C++ redistribution. I chose the former method (which worked) on the basis of not wanting all the extra files/file size of the re-distribution package, having limited amount of room in my vm. Now it seems that I should have installed the redistributable.

I now see I’m running win 8 Pro not Win 8.1 (although I thought that it had been successfully updated in the VM). I’m using this because I have genuine media and a valid product key from the purchase about 10 years ago. At this time, although I have a valid Win 10 licence running on my Windows computer (obviously), I have no idea of how its licence could be transferred to a vm.

And I’m confused. What is it about my post that caused this reaction ? 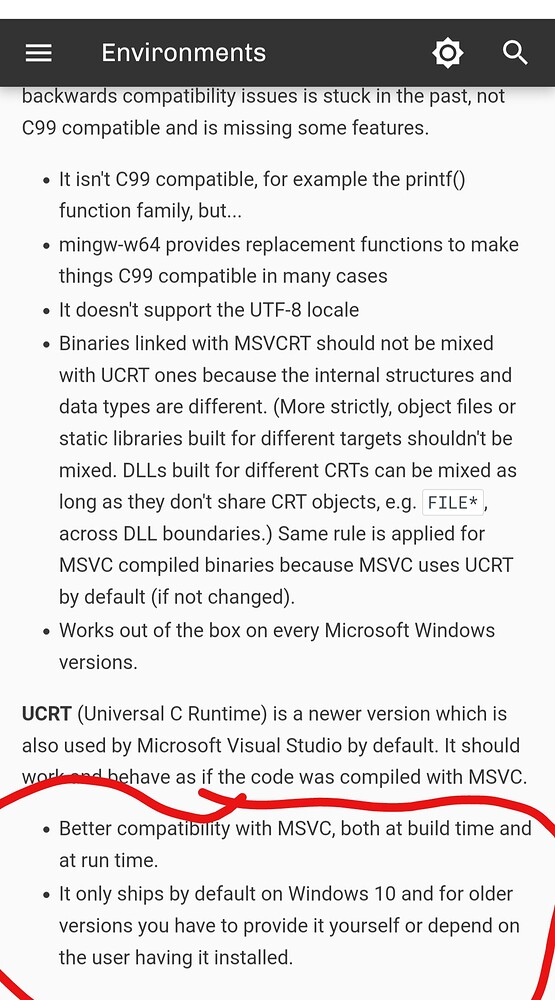 So yeah, comes with win10 out of the box. Requires manual installation on older versions.

Since older versions are all unsupported by MS, i understand why it is not included in a build or installer of software. And i hope they don’t (so not encourage people sticking around on unsupported platforms ).

Having now removed about 1% of my ignorance of the requirements to build, install and run dt I have installed UCRT to my windows virtual machine. I shouldn’t be amazed, but I am: dt started without further problem. So, thank you.

OpenCL is not enabled; having failed in the past to solve problems with dt and OpenCL, I’m going to have to live with this, which is a bit unfortunate: the whole point of trying to run dt in a windows virtual machine was to demonstrate that VirtualBox’ emulation of my GPU is effective. Then the fact that Photoshop CS6’s fails to find an accelerated graphics card while running in a virtual machine is probably a Photoshop error and not a VirtualBox error. That case remains unproven.