I have NEF files on my mac. I am trying to sharpen with raw therapy but none of the sharpening sliders are changing my image. What is wrong?

I set it to 100% but when I adjust radius and amount nothing happens. It is an NEF file extension is that ok?

Also are you sure you’ve turned on the module? Click the power icon next to it.

I don’t understand what does tuend mean what module? What Power icon/

Sorry, I meant “turned on” 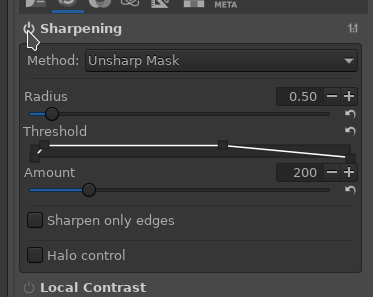 where the mouse cursor is

Thank you so much that did the trick.

OMG. That is a first in a photo editor. You know you messed up your UX if your users need forum help or read a user guide to do sharpening. Thanks for the tip: suddenly a lot more made sense as to why luminance was not working, etc. I don’t understand why this is not auto-toggled as soon as you start pulling sliders.

I should not say that RT UX is perfect. But when you want to use a FOSS raw editor, not reading at least introductory chapters of user manual is a good way to mess up your first processings or at least to be puzzled by how it works. It needs a lot of learning to master all aspects of raw processing and this forum is a very good resource for that.

For commercial raw editors, it can be different as they apply default processings under the hood.

That said, Rawpedia is your friend and don’t hesitate to read the threads, some are very instructive.

I don’t understand why this is not auto-toggled as soon as you start pulling sliders.

There were already discussions about that. Power users prefer this way for performance/responsiveness reasons.

I don’t understand why this is not auto-toggled as soon as you start pulling sliders.

Tools that are both computationally intensive and have multiple sliders requiring attention don’t benefit from a UI perspective from such auto-toggling; every little tweak kicks off the processing. If you want that behavior, be willing to live with simpler, faster, lower-quality tools…

And yes, welcome to the forum. Really. FWIW, I’ve learned more about the guts of digital imaging here than anywhere else I’ve lurked or contributed…

Hi, Glenn. What I was saying is that if they are off by default (which is fine), they should be enabled once you start fiddling with them.

don’t benefit from a UI perspective from such auto-toggling; every little tweak kicks off the processing.

This does not make sense to me. If you have tweaked a setting, one would assume that you want to use them

Therefore, a default setting of enabling something upon change makes sense.

If you want that behavior, be willing to live with simpler, faster, lower-quality tools…

I just started using RT this weekend, and the astounding number of silent crashes per day is its main quality so far (maybe a 5.8 thing)

I have used Lightroom (that sluggish beast) for years, and formerly Bibble (now Corel AfterShot Pro), neither known as low-quality tools. They use that approach because it makes sense. When designing for a user, design for the least amount of surprise

It’s not like I do not sympathise with speed arguments, it’s just that in this case, it seems moot, given that it would only make sense if you were not to want the effect you just tweaked. As a software engineer / UX person, it just seemed odd. You can always enable power users to do custom stuff, if they prefer it.

The tools I was referring to were the individual image operations, and the choice of a simpler algorithm in order to do such interaction. Particularly denoise, the better algorithms are compute-intensive and having it kick off with every scooch of the slider is rather annoying.

I write my own raw processing software, and I had to put a toggle on my denoise tool for this very reason. It’s got two algorithms, and the nlmeans option for each scooch of the sigma slider would commence a multi-second lock while it did it’s thing. So now I can set both sigma and radius, then kick it off. The other algorithm, wavelet, is fast enough but the results are not as as satisfying.

I’m also intermittently playing with a adaptive UI timeout, where for a specific tool the first couple of times it is kicked off the durations are logged, and if the average duration is below a configurable threshold, the tool would switch to an immediate kickoff mode for each UI input. Haven’t experienced enough joy with it to merge the branch…

You’ll find this community quite interesting, with your background. Natron, particularly, is currently having a UI discussion in another thread, and they’re sparse on development muscle, so they might appreciate the help.

What I was saying is that if they are off by default (which is fine), they should be enabled once you start fiddling with them

We have had this discussion before, a few times, and always end up where we are now. It does cause some confusion for new users, but most seem OK with it once they’re aware of the way it works. The appication is not designed around the newbie experience.

Therefore, a default setting of enabling something upon change makes sense.

Perhaps your perception has been tainted by your experience with other software. Intuition is based mostly on past experience.

the astounding number of silent crashes per day is its main quality so far (maybe a 5.8 thing

If you want to solve that, there are plenty of people who will help you. As of now, you haven’t provided nearly enough detail.

You know you messed up your UX

If you’ll allow me a suggestion, when coming to a new forum and commenting on software that has been developed for years and is highly appreciated by many people, your comments may be better received if you take a more humble approach.

In a FOSS community there are no customers; the best approach to take is to contribute instead of just criticizing.

This may be a common stumbling block for people who first try one of these packages, expecially if they fail to read the introductory doc about the UI, but clearly It’s popular and there has not been a stampede of experienced users campaigning to change it!