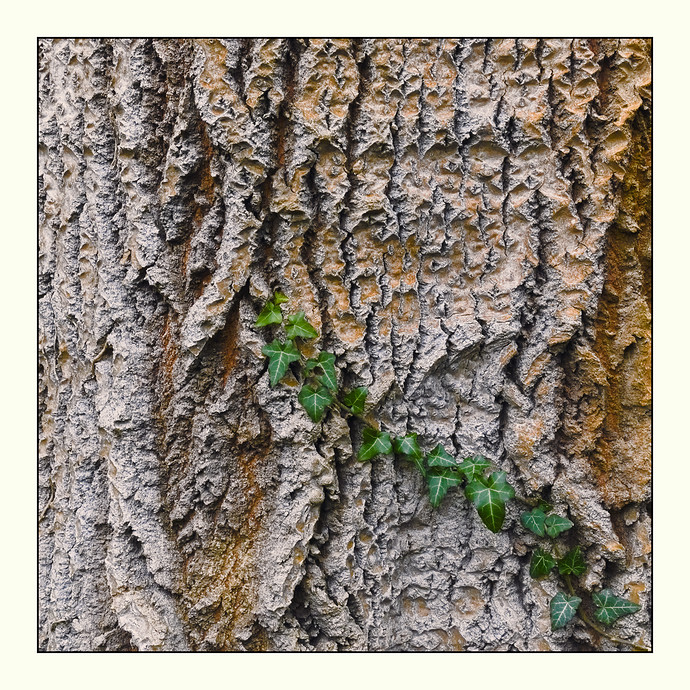 I’ve been looking at trees lately, especially bark at a closer range and I love the texture and slow curving vertical lines. You have got to like those valleys and ridges that are created over time. The ivy is a nice lead across, and contrasts with this miniature landscape.

I shot this at a 1:1 ratio and at the time I envisioned it to be a B&W edit, but after loading it and looking at it for a while I really liked the colour palette that nature gave me.

Gives me the Garden of Eden vibes.

A nice picture.
I haven’t tried Krita and vaguely understand it’s for painting. What did you use it for in this image please?

I haven’t tried Krita and vaguely understand it’s for painting. What did you use it for in this image please?

At its core Krita is, like GIMP, a FOSS raster graphics editor, but the emphasis does lie on digital painting (and 2d animations). This doesn’t mean that it can’t handle images, on the contrary!

Although my experience is still limited at the moment I find it a very nice replacement for the stuff I did, and wanted to do, in GIMP. Especially its all-round non-destructiveness and ease of use, compared to GIMP, is what made me switch.

OK, what did I actually do with Krita in the above image (probably too much, but I’m still learning and need the practise

All of the above is non-destructive and relatively easy to do. Haven’t been able to do something similar in GIMP without having to go through all kinds of hoops and restrictions and still ending up with a destructive end-result.

Thanks for the detailed reply.
I think I must try Krita sometime.