Hi.
After setting up my camera to uniwb, dcraw shows the following multipliers.
I was expecting the green multiplier to be 1.000, but it isn’t. After the readings I made to implement uniwb, I assumed that the green channel is always to be invariant, but maybe this is a wrong assumption.

Regardless, developing a few images has presented no problem so far, so maybe this is a nonsense question.

After setting up my camera to uniwb…

Can you explain how you did this?

I thought the purpose of uniwb was to set all multipliers to 1.0 in the camera. But I could be wrong.

Can you explain how you did this?

I I followed the steps in

I may be slow tonight, but why do you want to incorporate uniwb into your flow?

why do you want to incorporate uniwb into your flow?

For the same motivation that drove the first “uniwb developers” to devise it, as stated by one of the first users here.
EDIT: Also, a recommended reading:

The Myth of Digital Reds, or, How to Properly Expose to the Right Capturing

The myth of digital reds and the concept of highlight headroom I’ve seen repeated many times on the internet that “reds are difficult to capture on digital” and I’d like to dispel that notion. http://photonstophotos.net/GeneralTopics/Exposure/Study_in_Red_-_Part_2.htm On this old page, Bill Claff, a generally trustworthy source of objective data nowadays, notes that with this extremely intense red, he needed to underexpose (read: use -2 stops of exposure compensation) this image of a flower by…

dcraw reports numbers after doing some calculation. What multipliers are reported by exiftool?

What multipliers are reported by exiftool?

Since multipliers show in many exif entries, I prefer to list the entire exif set of info (sorry about that).

Let’s think through the problem. I think the purpose of (the rather awkward) UniWB is to make the JPEG driven histogram in the camera behave as if it were a raw one. This ruins the JPEG and so there is no point using the JPEG+RAW mode as you have.

To approach this problem, I would first need to take a photograph of a evenly soft illuminated grey card near saturation. If I know the properties of the card and lighting, I would know what WB, etc., settings to change to make the histogram behave in the way I want it to.

Now here are the multipliers that (I believe) you should be examining. I say “(I believe)” because I haven’t done this in a long time and every camera has different metadata. If I recall correctly, you could ask exiftool or maybe it was exiv2 to expose the full name of the tags to make sure you have the right one(s).

If these are the correct ones, then you can clearly see that the ratio is off from R=G=B. Clearly something is wrong. If I recall correctly, Mr Kasson’s quick method depends on your monitor being calibrated / profiled in a particular way.

I noticed something else in your metadata.

In my opinion, it shouldn’t be Standard but Neutral. If you don’t have Neutral, then Faithful. Basically, turn down or off anything that would affect the JPEG and make it more abstract from what the “raw” output would be (e.g., sharpening, non-linear modes).

PS I noticed that your dcraw output says 3692 as saturation. At 12 bit, it should be 4096 as the max value. I wonder why dcraw would use the former value…

I’m not familiar with Canon exiftool results, but I think the “Measured RGGB” mentioned by @afre is what the camera measures from the scene. But the camera is set to use a custom WB, isn’t it, so it ignores the measured RGGB?

I think these are the important ones:

These are exactly the ratios given by @gadolf above, but in RGBG order:

Ideally, cameras would have a simple ability to set the four multipliers. Alas, that would be too simple.

I used measured because (I believe) that is what the camera actually sees. If you think of it another way, in measured, the reds are lacking; so in the WB settings, we give red more weight. In any case, @gadolf should be able to verify the appropriate tags.

I couldn’t find anything on the internet that makes sense to me regarding those tags.

I think the goal of uniwb is to get all four multipliers the same, or at least very close

I think that’s the point, at least from what Guillermo Lujik says: 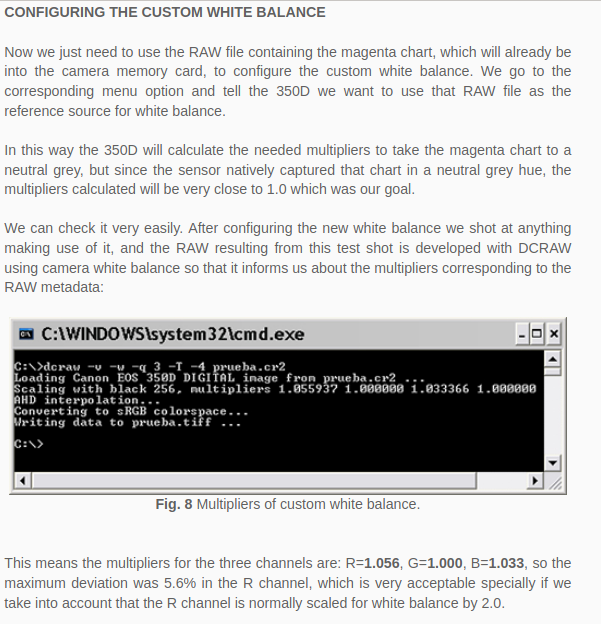 I was going to link to his page.

Also on his tutorial, I see 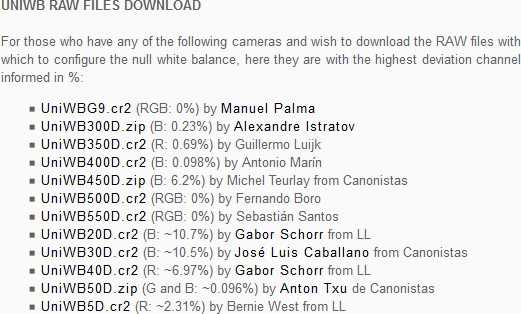 ↑ Take a look at the metadata to glean on what Mr West did.

Yes, I saw that.
But I wanted to start from scratch. Anyway, since my camera is rather old (5D from 2005), I thought it would be better to do it manually so that I ended up having measurements according to this specific camera, not a generic 5D image probably produced by a healthier 5D camera than mine.

What I mean is that you do your part and then compare his metadata with yours. I had trouble downloading it via Firefox so I used a separate downloader. Here is the file for reference: uniwb5d.cr2 (11.5 MB).

I see.
I was already doing that, but since you’ve made it, thanks.
In summary, his uniwb5d.cr2 shows:

EDIT: Take note that what I call “my uniwb5d_gadolf” is the image I took from the screen after following all the steps to produce the image that will bring jpeg wb closer to raw, which, in my case, is IMG_6909.cr2

I am confused by the image above of Mr Lujik’s. His maximum deviation looks like he is doing R-G=5.6%. If we do that with the provided CR2 or yours, we get a huge difference. Something is amiss.