Thanks for the feedback!

Buttons should have some sort of visual feedback, depress, shadow, colour change or something… find myself wondering many times, did I press that or not

True, it is in principle foreseen but requires some work on the icon files…

when selecting raster export format, one also has to write the format (I believe gimp is the same)

I also agree on that, and It’s now on my TODO list

controls (can be like the normal grad) to position radial gradient, maybe also featherable and invertebrate ones like in path mask

I agree that positioning the center of the radial gradient with the mouse would be very good.
The shape of the gradient can be changed and even inverted with the associated curve… there is already an “invert” checkbox to invert the gradient

double clicking a .pfi file opens PF but one has to manually direct it to the file, no big deal
no drag and drop open - to the icon, no big deal

Will look into that…

EXR support is already included in some experimental version, and will soon land in the stable branch. For DNG support, it will take a bit longer…

this is just a hungry ghost, LUT support

The same experimental version that has support for EXR also allows to load and apply arbitrary LUTs in HALD or .CUBE format (thanks to G’MIC)

Would be nice, but I do not have yet meaningful icons for all the tool… I’m putting that in lower priority for the moment.

the crop guides and its feedback is very weird, the offset grid does not help at all, a bit laggy too

when scaling in pixls’ unit need to enter both values even with the fit scale mode, that’s annoying

You’re absolutely right… the best would be that if one of the two values is != 0, then the other one is left unbounded. For setting a specific bounding box, one would still need to set both values
Not too difficult to implement, can be scheduled for next release.

I now realise that this parameter cannot work with PhotoFlow’s version of G’MIC, simply because each tile is processed independently. I will simply hide this sider in the UI, as there is no way to make it working properly.


Its a diagonal off topic, but I was trying to blend a HDR and enblend-enfuse gives me errors, hdrgen tints the output and/or only works with 8bit tifs and for the life of me cannot make pfstools work properly =( … I ended converting @Chymera 's NEFs from this thread. To be clear I have my own files to process but it’s helpful to see what others have achieve, as a reference. So I batched with dcraw -v -w +M -H 9 -o 2 -W -q 3 -6 {it might have been a lower -H parameter though}, then off to hugin and finally a reasonable time with Photoflow… trying to preserve HL as much as possible. It’s not hyper-clean, there’s a purplish patch of the sky -easily fixed with gimp - some moiré (visible at 1:1) on the bridge’s railing, etc. At least for those who like cleaner images, this time I didn’t add grain =)

Once again thanks Andrea 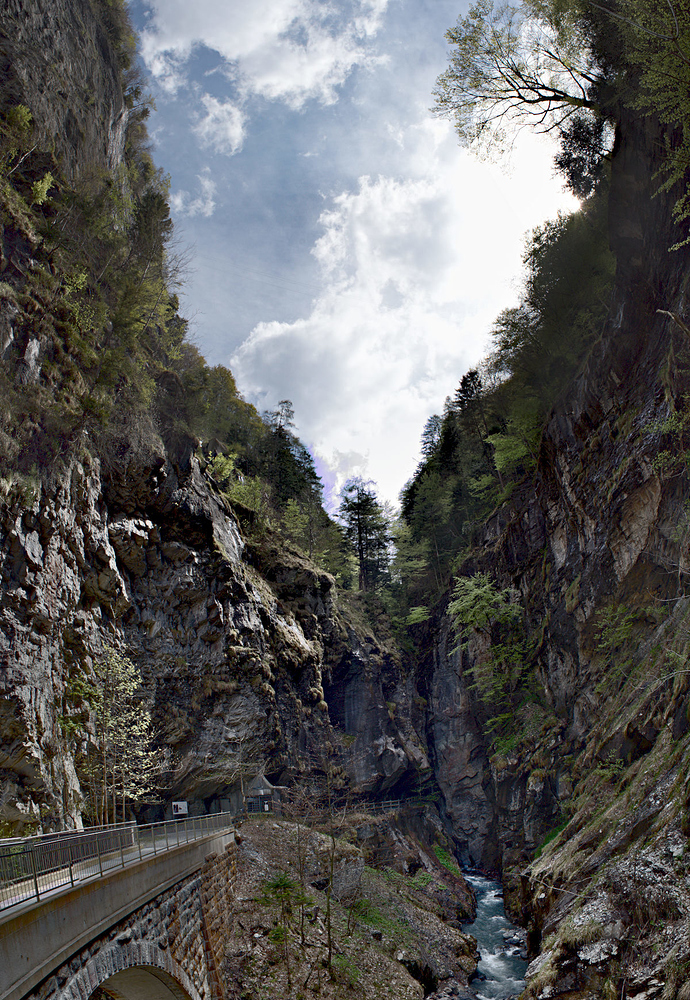 You might be interested to know that photoflow also provides a batch processor. Here is a quick use guide:

The %name% keyword will be replaced by the name of the input file, without extension. So the above command will generate your_raw_file.tif.

By the way, way kind of error did you get from enfuse?

That’s certainly interesting to know, kind of a mixed approach GUI and command line, nice!
just a silly question - I’m using the osx 0.2.7 image - the pfbatch exec is where exactly?

Regarding enblend/enfuse some BS library missing error… I do not dare to go down there and find and having to deal with the bodies’ parts, you can smell them from here

CONTEXT: These past couple of days I’ve being trying to find the less painful more accurate HDR workflow possible. I was surprised to find first that LR’s own use of enfuse left a trail of visual scoria and that despite the “comfort” of a GUI (of the ones I’ve tried), it takes too much time and decisions and tests and whatnot to get to a base - not even talking about tone mapping - just a base image (preferably a 32b exr) to start the real carving.
So I played around with the command line HDR options trying to find something clever and to the point like the good Guillermo’s zero noise was long long time ago in a far away galaxy, unfortunately in this machine I’m also unable to run zero noise within wine. That also aligned the stack and IF possible would kill some ghosts.

A little while ago I wrote a short description of the workflow I use with Hugin to combine/enfuse bracketed shots: Only a small testimony

The good news is that Hugin is available for OSX and works fine (the screenshots in the tutorial are from OSX), so maybe you’ll find it useful…

Concerning the pfbatch command, I forgot you are under OSX… it is not included in the bundle at the moment, but it should be relatively easy to add it.

I’ve known and use (almost solely for panos) hugin for some years. And yes I’ve checked that thread and actually that’s the one which led me to paperdigit’s expanded tuto based on yours; beginning of kittens thread, so a bit late thank you

For now I’ll change beds like the good whore I am from LR’s enfuse to hdrmerge, to hugin, to median stack, always preferring the mucho-macho pals that eat raw, back to pfs aparently thick paste (trying to understand WTF pfshdrcalibrate is so sad) and then dance for a bit with amazonic hydrogen akira sub_hdrgen and a pill boost 4 all the lonely grandmas, to go back to fdr tools, hello pictureduck, by means of dcraw, give the watching brother (gui) a wink and zero noise another try, be a snob about luminance HDR and tease the imagefuser GUI just for fun. The less open softwera won’t be publicise.

Concerning the pfbatch command, I forgot you are under OSX… it is not included in the bundle at the moment, but it should be relatively easy to add it.

Is there a Wavelet Decompose filter in Photoflow 0.2.7? I mean - something like the GIMP Wavelet Decompose plugin, that lets the user determine the number of scales and then creates a set of layers corresponding to the scales? I found a Smooth [wavelets] filter but it looks like something specific to smoothing.

Is there a Wavelet Decompose filter in Photoflow 0.2.7

Yes, PhF has a wavelet decompose tool that is based on the same code as the GIMP plug-in. You can read about it in the announcement of release 0.2.7.

Thanks. Found it. Is the layer “split details” that the preset creates equivalent to the ‘wavelet residual’ layer that the GIMP plugin creates?

Is the layer “split details” that the preset creates equivalent to the ‘wavelet residual’ layer that the GIMP plugin creates?

Yes! I should probably change the name of the layer to a more informative one…

For some reason it behaves differently when this layer (the residual one) is disabled - see below.

I’m trying to understand if this is a bug or maybe I’m doing something wrong. 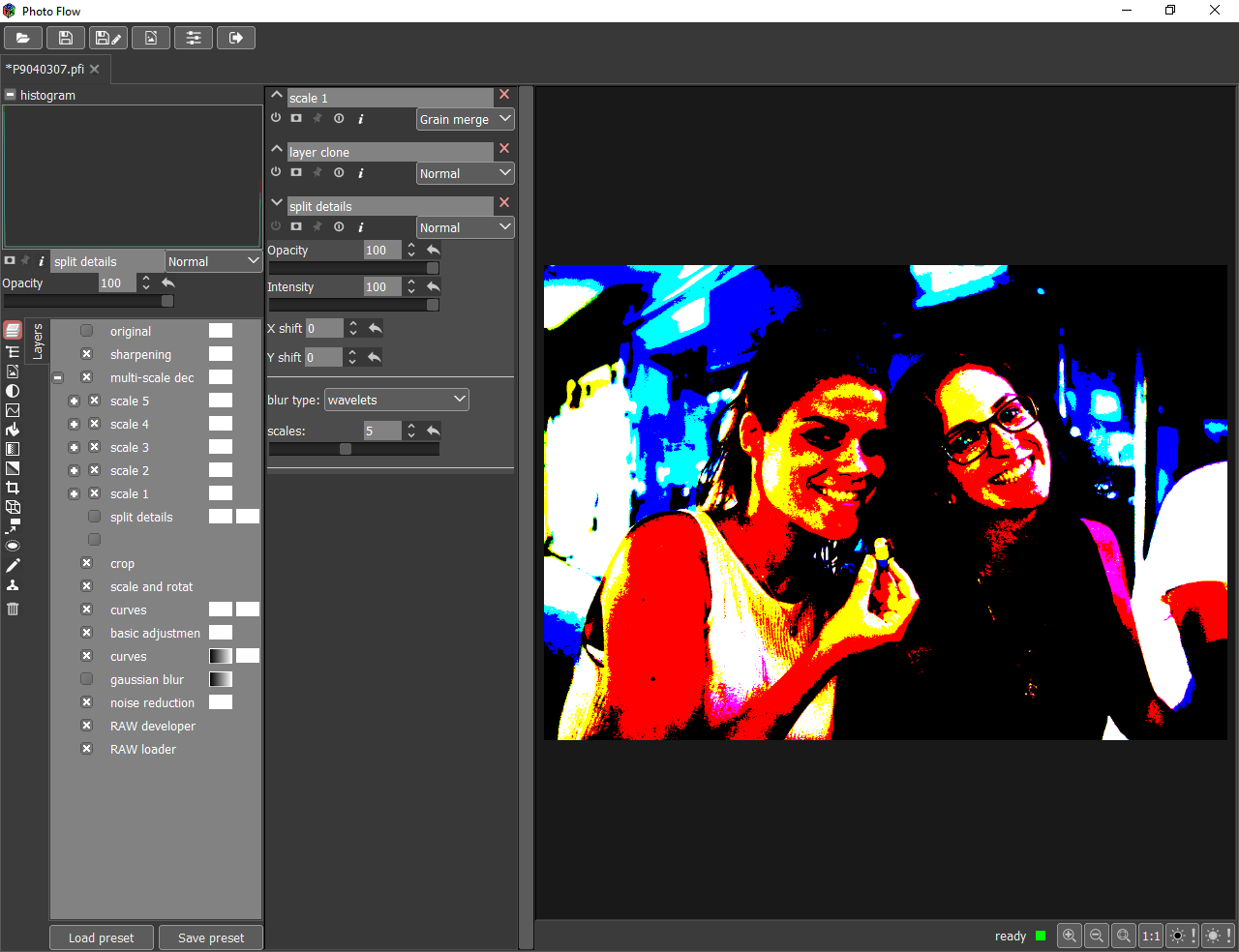 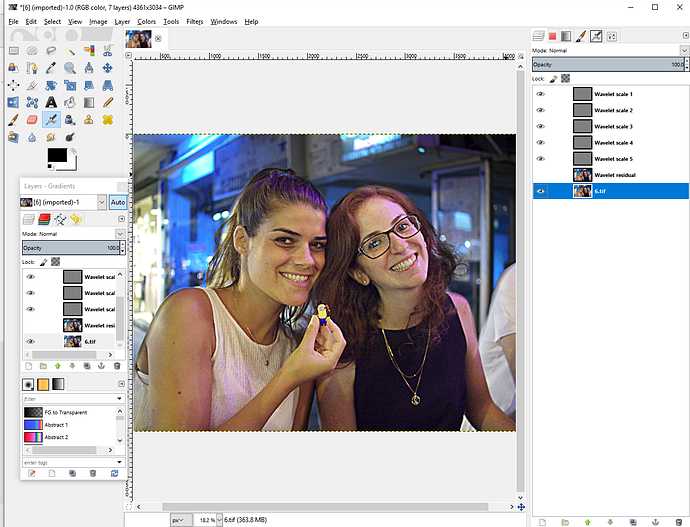 wavelet2.png1280×979 798 KB
In the GIMP’s version the upper wavelet layers (wavelet scales) add up to emphasize detail of the underlying layer (the file 6.tif).

I’m not sure about PF, but each detail layer in GIMP usually has its blending mode set to “Grain merge”. The G’MIC plugin also does this when in GIMP.

For some reason it behaves differently when this layer (the residual one) is disabled - see below.

I’m trying to understand if this is a bug or maybe I’m doing something wrong.

@patdavid the layers are recombined in “grain merge” mode in PhF as well.

Hi,
I have another question about the feature set - is there a healing brush in PhF? I understand that the clone stamp tool is for cloning only.
Besides, has anything changed in the operation of the clone stamp tool since this post? I didn’t manage to use it on Windows 10 (pressing Ctrl+Right Click doesn’t seem to set the source spot).
Thanks!

I have looked into your “split details” problem again, and realised that what you see is “kind of normal”.

Here is my reply to the GitHub issue:

This is normal: the residual layer (the one associated with the “split details” tool) is actually outputting several images at once, one for the residual + one for each detail level. The clone layers inside the “scale 1/2/3/45” groups simply clone one of the output images of the “split details” layer, which is then blended back in “grain merge” mode.

If you hide the “split details” layer, you also disable the input of the clone layers in the “scale 1/2/3/45” groups, with unpredictable results.

I have another question about the feature set - is there a healing brush in PhF? I understand that the clone stamp tool is for cloning only.
Besides, has anything changed in the operation of the clone stamp tool since this post? I didn’t manage to use it on Windows 10 (pressing Ctrl+Right Click doesn’t seem to set the source spot).

The healing brush is in my long-term todo list, but not available yet. Indeed, the clone stamp tool only does pixel cloning.

The current key combination for defining the source area is Ctrl+Alt+right click, I have now corrected the blog post accordingly… thanks for pointing this out!

The clone stamp works for me now, but only with the key combination of Ctrl+Alt+Left click. The combination with right click doesn’t work. Maybe it’s an operating system thing?

A more general question - do you maintain a list of implemented/planned feature set on the blog or somewhere else? It could help new users who aren’t sure what’s available and what isn’t. I ran into the blog post about the clone stamp accidentally while actually searching for something else. And I found this tutorial on wavelet decomposition while googling “photoflow healing brush”

(it contains the text or the healing brush to clone details from one place to another. The term healing in this quote is actually inaccurate).

No, it’s me who is typing too many things in parallel… Ctrl+Alt+Left click is indeed the correct mouse gesture. Sorry!!!

Regarding the wavelet issue - I understand what you are saying, but I think it will be more intuitive and convenient for the user if hiding the “split details” layer will be treated internally as the procedure you suggested - a clone of the original image will be created just above the “split details” layer and then the output will be predictable.

I think that this would be quite difficult to implement, and also represent some sort of “exceptional case” that is handled differently from the rest…

Another, much simpler possibility would be to add an option in the “split details” tool for outputting the original image instead of the residual. What do you think?