Mads Nissen is awarded this years World Press Photo of the Year, for the second time (also in 2015).

Not sure if I can copy/paste that photo here so you have to do with the link to the World Press Photo website. It also has all the other winners and runners-up for 2021

Yeah, the whole in the city Beirut nitrate explosion hit me rather hard, and I know many with me. I was born and raised in Enschede and although I wasn’t living there any longer at the time I was their visiting friends, sitting on a terrace and enjoying a really nice sunny day when the firework disaster hit. It is a surreal experience to see large pieces of stone coming down out of nowhere in the middle of town…

None of the people I know got seriously hurt, some did loose their businesses: (as in: No building left). 23 others died and about a 1000 got injured.

We were very lucky. It was a beautiful sunny Saturday and that many people where enjoying the sun elsewhere (first beautiful weekend if I recall correctly) and the neighboring Grolsch beer brewery had some silos with explosive stuff that got spared the brunt of the explosion and the fire brigade was able to keep cool after that. It could have been so much worse…

Not nearly as devastating as what happened in Beirut but I have a reasonable good idea what it was like and the devastation that must have happened there.

Who the fuck thinks it is a good idea to store explosive in the middle of a city.

Oftentimes the most obvious thing in the world isn’t, which is why ingrained policies or ideas should be revisited once in a while, and not only for the appearance of busyness. But it hard for people to change. I have been in so many situations where I warn people of danger and they think I am nuts and shun or laugh at me. In the end, we all lose.

Covid is another example of tragedy. Our government threw out our PPE and discontinued medical preparedness programs and slashed health care and research funding ad nauseam. Then the virus hit and we didn’t care for the first several months.

Oftentimes the most obvious thing in the world isn’t, which is why ingrained policies or ideas should be revisited once in a while, and not only for the appearance of busyness. But it hard for people to change.

Maybe we should have a mandatory World Press Photo day in all (late) primary or middle school equivalents. Somewhat lighthearted discussions of all the hardship, beauty, sadness and awesomeness, in equal parts, that has been captured that year. Those young ones won’t be able to directly influence policies but being made aware should start early I think.

Then again, more mandatory stuff might not be the answer and I’m sure there will be a small group with a very load mouth that would get it banned. And I’m not even talking about countries were information suppression is going rampant.

You mention Covid and the way it is dealt with, which is a worldwide issue. I’ve noticed that we seem to be going backwards if I look at the legal and social discrimination and continuing violence against the LGBT+ community.

I could write page after page with all kinds of examples. But I won’t. We are in dire need of a humanity wide enlightenment though…

lighthearted discussions of all the hardship, beauty, sadness and awesomeness, in equal parts, that has been captured that year.

I definitely enjoy speaking about the world with the youth and children for whom I volunteer. It is sad that so many people are unaware of what’s around them, without second thought. Photos and words have a way of stimulating one’s appreciation of what is and can be.

Who the fuck thinks it is a good idea to store explosive in the middle of a city.

This reminds me that just after the U.S. Civil War, here in Mobile, AL, they were storing live ammunition in the middle-ish of the city when some careless handling likely caused the entire warehouse to go up. It was one of the largest explosions pre-WW1.

On May 25, 1865, in Mobile, Alabama, in the Southern United States, an ordnance depot or "magazine" exploded, killing some 300 persons. This event occurred just after the end of the American Civil War, during the occupation of the city by victorious Federal troops. The depot was a warehouse on Beauregard Street, where the troops had stacked some 200 tons of shells and powder. Some time in the afternoon of May 25, a cloud of black smoke rose into the air and the ground began to rumble. Flames s...

We had our share of big explosions in the past, most of them ships loaded with gun powder.

But the historical one that stayed with me was what is known as the Delft Thunderclap. This happened in 1654, destroyed most of the town and killed one of Rembrands most promising proteges, including just about all of his work: Carel Fabritius. 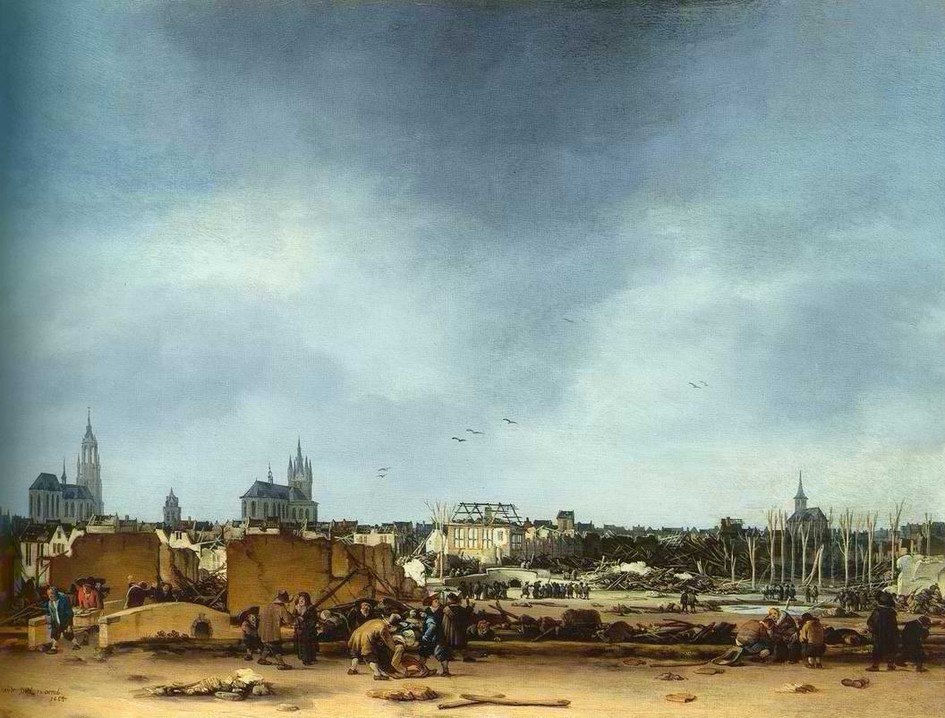 The catastrophe is know as "The Delft Thunderclap" from the town where it happened, and took place at 11 in the forenoon of 12th October, 1654. At that hour the powder magazine, which then stood within the town, and at that moment contained between... 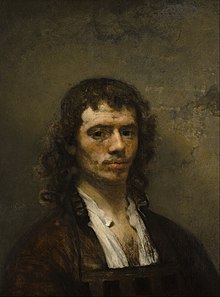 Carel Pietersz. Fabritius (Dutch pronunciation: [ˈkaːrəl ˈpitərs faːˈbritsijɵs]; bapt. 27 February 1622 – 12 October 1654) was a Dutch painter. He was a pupil of Rembrandt and worked in his studio in Amsterdam. Fabritius, who was a member of the Delft School, developed his own artistic style and experimented with perspective and lighting. Among his works are A View of Delft (1652; National Gallery, London), The Goldfinch (1654), and The Sentry (1654). Carel Pietersz. Fabritius was born in Febr...

We should know better nowadays…

Blast cloud of the explosion 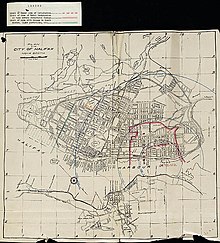 Plan showing the radius of the explosion 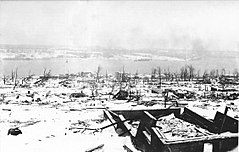 At 9:04:35 am the out-of-control fire on board Mont-Blanc set off her cargo of high explosives.[58] The ship was completely blown apart and a powerful blast wave radiated away from the explosion initially at more than 1,000 metres (3,300 ft) per second. Temperatures of 5,000 °C (9,000 °F) and pressures of thousands of atmospheres accompanied the moment of detonation at the centre of the explosion.[59][27] White-hot shards of iron fell down upon Halifax and Dartmouth.[60] Mont-Blanc 's forward 90-mm gun landed approximately 5.6 kilometres (3.5 mi) north of the explosion site near Albro Lake in Dartmouth with its barrel melted away, and the shank of Mont-Blanc 's anchor, weighing half a ton, landed 3.2 kilometres (2.0 mi) south at Armdale.[61]

A cloud of white smoke rose to at least 3,600 metres (11,800 ft).[62] The shock wave from the blast travelled through the earth at nearly 23 times the speed of sound and was felt as far away as Cape Breton (207 kilometres or 129 miles) and Prince Edward Island (180 kilometres or 110 miles).[27][63] An area of over 160 hectares (400 acres) was completely destroyed by the explosion,[61] and the harbour floor was momentarily exposed by the volume of water that was displaced. A tsunami was formed by water surging in to fill the void;[64] it rose as high as 18 metres (60 ft) above the high-water mark on the Halifax side of the harbour.[65] Imo was carried onto the shore at Dartmouth by the tsunami.[66] The blast killed all but one on the whaler, everyone on the pinnace and 21 of the 26 men on Stella Maris; she ended up on the Dartmouth shore, severely damaged. The captain’s son, First Mate Walter Brannen, who had been thrown into the hold by the blast, survived, as did four others.[67] All but one of the Mont-Blanc crew members survived.[68]

Over 1,600 people were killed instantly and 9,000 were injured, more than 300 of whom later died.[27] Every building within a 2.6-kilometre (1.6 mi) radius, over 12,000 in total, was destroyed or badly damaged.[64] Hundreds of people who had been watching the fire from their homes were blinded when the blast wave shattered the windows in front of them.[69] Stoves and lamps overturned by the force of the blast sparked fires throughout Halifax,[70] particularly in the North End, where entire city blocks were caught up in the inferno, trapping residents inside their houses. Firefighter Billy Wells, who was thrown away from the explosion and had his clothes torn from his body, described the devastation survivors faced: “The sight was awful, with people hanging out of windows dead. Some with their heads missing, and some thrown onto the overhead telegraph wires.” He was the only member of the eight-man crew of the fire engine Patricia to survive.[71]

Large brick and stone factories near Pier 6, such as the Acadia Sugar Refinery, disappeared into unrecognizable heaps of rubble, killing most of their workers.[4] The Nova Scotia cotton mill located 1.5 km (0.93 mile) from the blast was destroyed by fire and the collapse of its concrete floors.[72] The Royal Naval College of Canada building was badly damaged, and several cadets and instructors maimed.[73] The Richmond Railway Yards and station were destroyed, killing 55 railway workers and destroying and damaging over 500 railway cars. The North Street Station, one of the busiest in Canada, was badly damaged.[74]

View from the waterfront looking west from the ruins of the Sugar Refinery across the obliterated Richmond District several days after the explosion. The remains of Pier 6, site of the explosion, are on the extreme right.

The death toll could have been worse had it not been for the self-sacrifice of an Intercolonial Railway dispatcher, Patrick Vincent (Vince) Coleman, operating at the railyard about 750 feet (230 m) from Pier 6, where the explosion occurred. He and his co-worker, William Lovett, learned of the dangerous cargo aboard the burning Mont-Blanc from a sailor and began to flee. Coleman remembered that an incoming passenger train from Saint John, New Brunswick, was due to arrive at the railyard within minutes. He returned to his post alone and continued to send out urgent telegraph messages to stop the train. Several variations of the message have been reported, among them this from the Maritime Museum of the Atlantic: “Hold up the train. Ammunition ship afire in harbor making for Pier 6 and will explode. Guess this will be my last message. Good-bye boys.” Coleman’s message was responsible for bringing all incoming trains around Halifax to a halt. It was heard by other stations all along the Intercolonial Railway, helping railway officials to respond immediately.[75][76] Passenger Train No. 10, the overnight train from Saint John, is believed to have heeded the warning and stopped a safe distance from the blast at Rockingham, saving the lives of about 300 railway passengers. Coleman was killed at his post.[75] He was honoured with a Heritage Minute in the 1990s, inducted into the Canadian Railway Hall of Fame in 2004,[77] and a new Halifax-Dartmouth Ferry was named for him in 2018.[78]

Many years ago I was in the Maritime Museum of the Atlantic in Halifax and read about this tragedy. I had previously been unaware of the explosion, and was dumbstruck by the significance of the event. I spent virtually the entire day there reading about it.