Noisy raw… scary. I have stayed away from those so far, not sure if my processing is equipped for that kind of noise, but I’ll give it a try.

“Tone curves” in all raw converters are literally an example though. Pulling the “whites” slider upwards in lightroom creates RGB skewing, as does pulling the “blacks” slider down. Rawtherapee uses an S curve for the base look. It is definitely everywhere.

That’s because they create most of the problem. Default state of RGB processing is high-chroma colors that have high luminance clip to yellow, and people just got used to it.

Reason is, the only high-chroma color in sRGB gamut at high luminance is yellow. Example here with a chroma/hue slice at constant lightness: 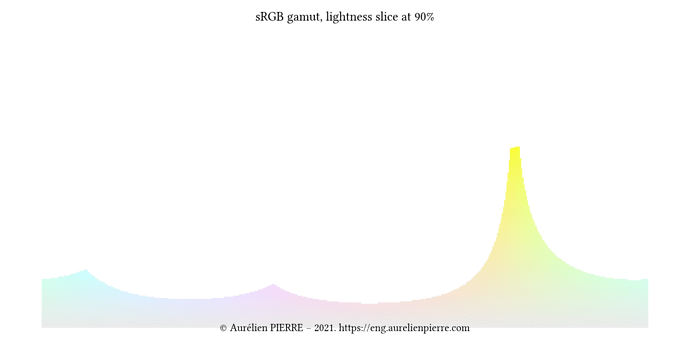 You’re not the only one aware of the problem, and working on a solution. Just search this forum for “rat-piss”.

Oh, for sure there is software out there doing it wrong. But ‘using better models’ has been in changelogs ever since the end of the nineties, so there is also for sure more software trying to do it differently.

most of the curves in Rawtherapee for instance have (the option for) some sort of ‘preserve chromacity’ andI didn’t touch the curves in a long time in rawtherapee to be honest.

I believe the last (few) process-versions in Lightroom also don’t use the same models anymore for basic white/black/exposure modifications (the curves dialog in ACR still does for ‘compatibility sake’ I think). Colorperfect has been calling for years that they do a better job of preserving true colors (but the plugin is a turd to use for most people :))

And I also mean nothing against your attempt to do it differently. Nothing but respect for people finding different ways of doing things. Like you say, they have to start getting used to more proper ways somehow

But, with all the background info Aurelien gave on Color Calibration and Filmic in darktable, there is a clear difference between ‘attempting’ and ‘doing it right / achieving it’. The whole ‘phase’ that a lot of programs used LAB space to do adjustments is a good example. His opinions on CIECAM is also a good one :).

There have been attempts to model color behavior, but - specially in the HDR era now - if we actually managed to do it, I’m not knowledgeable enough.

See it more as a sign of “You’re not alone out there trying to do it right”, so keep it up :).

(PS, yellow skies is also a problem of people using lots of saturation and lowering the highlights down ‘because clipping bad’… thinking the yellow color is supposed to be there all the times. Yes, it’s subjective about what you like… but also, people get used to certain looks that isn’t always wanted

A bit awkward (and non intuitive) having two modules that try to do the same thing but are used for differing cases.

But nobody says that filmic white exposure should always match the clipping threshold of the sensor “white” (first and foremost because sensors are RGB and know no white). So this highlight handling is completely contextual to what filmic does, regardless to the sensor dynamic range.

Thus these are not the same feature. They become equivalent, feature-wise, only if you willingly set filmic white exposure to the sensor scene-referred clipping value, which is a special case.

This I finally realized the other day! Highlight smoothing may be a less misleading term for describing what it actually does?

Still longing for better true reconstruction in darktable. When “reconstruct color” in the “highlight reconstruction” works (not often) I’m happy, but it mostly leads to crazy color shifts. I’m sure it can’t be as easy as borrowing some reconstruction code from RawTherapee or here?

Sometimes when reconstructing highlights (Highlights reconstruction + reconstruction in Filmic) I get strange horizontal lines in sky. Probably in burnt out parts. Did anybody experience something similar? I can add some screenshots later on if needed.

The Color mode in Highlights reconstruction may generate that kind of artifacts.

Yes I get that sometimes with colour mode, doesn’t seem to be much logic to when it appears. LCh is safer if colour mode generates these strange lines.

Sometimes? I’d estimate 40% of the images with clipped highlights for my α7 III. Not sure were talking about the same artifacts, but I’m getting very unflattering and strange purple patterns, not only horizontal. Should probably dig out an example.

I’m getting very unflattering and strange purple patterns, not only horizontal

Change the reconstruction to LCH

In fact the dt highlight reconstruction could be improved …

Still, if there are no artefacts this mode produces much better results for me than Lch.

Very much so. “reconstruct color” is the only mode which can compare to the competition. Sadly it’s a hit-and-miss operation.

In fact the dt highlight reconstruction could be improved …

It’s my major gripe with DT. If you’re after a filmic look, the importance of good highlight recovery (and smooth roll-off) can’t be understated. The reconstruct tab of “filmic rgb” handles the roll-off well, but does not reconstruct (despite its name).

Missed this on so far. I got rid of the ugly cyan while trying to keep the details in the bokeh. Also, I wanted to achieve a more natural skin tone. 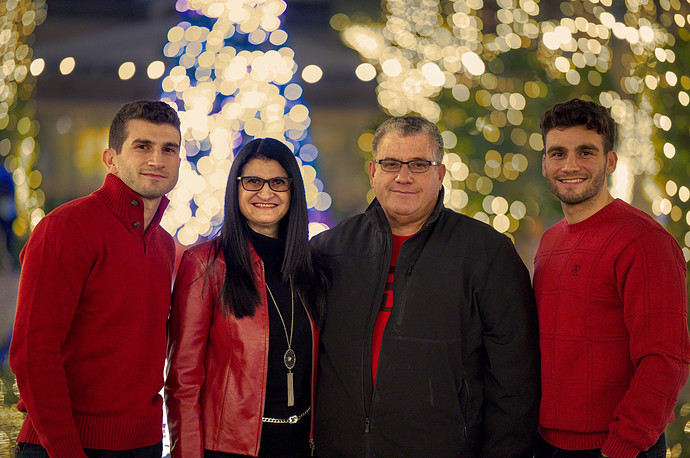