On old monochrome images more or less sepia toning :
I would like to be able to automatically retrieve the three curves of the RGB channels depending on the value of there luminosity…
A kind of histogram, not for the number of the pixels, but for their value.
Later, I would like to be able to transfer these curves to another image in order to get the same mood colored.
I do this work manually and it’s tedious and not accurate.
Vips-Nip2 helps me a little bit but I think there must be a way to go faster.
Any ideas?
Thanks a lot

Hello,
Of course, I know this way of saving a curve that has just been applied to an image.
That’s not the subject of my question.
I wish to recover the three RGB curves from an EXISTING photo and not from a work I have just done.
For example, an old “black and white” photo always contains a coloration due to aging, often sepia-like …
The curves of this photo are therefore not three straight lines merged at 45°, but three dissociated curves of which often the blues are very much set back from the other two channels and the greens slightly below the reds.
It would be simple if the deviations were constant, but this is not the case because by taking readings, one realizes that the % RGB varies a bit with the luminosities.

My question was: how can we get these original curves back so that we can apply them to another photo, for example?

Thank you for your answer.

My question was: how can we get these original curves back so that we can apply them to another photo, for example?

As far as I know there are two ways.

It is unfortunately a very complicated task.

You can try some histogram matching. E.g. 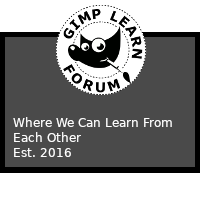 Where We Can All Learn From Each Other!

Thank you all for your answers?
Yes, age, that’s exactly what I want.
Unfortunately the plugin doesn’t work, probably because of GIMP 10 or Win10.
I spent a lot of time doing various tests without any result, the plugin crashes with an index error. Same with versions 2-3-4- and 5.
It seems that its creator has written a new version, but it is not compiled and I don’t want to go in this way.
I’ll try it under Linux, but the machine wasn’t designed for images.
I’m going to continue pointing by picking the most characteristic areas as I have done so far.
Thanks, Bye

Version 5 works to me.
Do you have the latest GIMP version? Before the latest version it doesn’t worked.
Where do you save the curve file?

HI
I uninstalled and reinstalled GIMP and now it’s working !!
I have no idea what caused this problem because GIMP was freshly installed and without any modifications or plugins.
It works, so I’m very happy.

Thanks again to everyone who helped me and thanks to the author of this plugin.

Sorry that was a mistake…