I created the PNGs using the quoted ImageMagick command from Darktable-exported JPEGs. Weirdly, the zig program crashed for three of my 180 images, which were all-white blown out. The error was a segfault when trying to read the pixel data, which I presume hints at some sort of issue with SDL.

Another problem was orientation, as the SDL-loaded PNGs seem to not read the orientation bit correctly. The image must be a true 600x400; a rotated 400x600 does not count. And image dimensions must match exactly, which is a problem since Darktable likes to export one pixel wider than my camera. I’m hoping that downscaling and my less-than-perfectly sharp lens saved me from issues with that.

I’d be happy to upload my training set by the way, if someone else wants to play with it or contribute to it.

I created the PNGs using the quoted ImageMagick command from Darktable-exported JPEGs.

Could you clarify and did you crop all images to 400x600 or resize the whole image??

I exported full-size JPEGs from Darktable, then resized them to 600x400 PNGs using convert -resize 600x600 -auto-orient source.jpg destination.png (convert is part of ImageMagick). Then I exported “fine” JPEGs from Fujifilm X Raw Studio, and converted them the same way.

It’d be good if you could share the actual png images you tried to use. I suspect the problem might be with the dimensions. The program throws a tantrum if the images are not of same size. I just pushed a fix so it only rejects the image pairs (and shows a warning about it) if the dimensions don’t match. So, you could try pulling the fixes from the repository and try again

I noticed that sunsets in particular looked off, with the new LUTs. I figured that this would be due to my training set not including many highly-saturated, very-bright colors.

But since there weren’t any vibrant sunsets forecast for the next few days, I figured I should be able to cheat by simply taking pictures of a bright color chart on my computer monitor.

And indeed this changed something; most notably, the LUT PNG file sizes got larger, which I interpret as them containing more data. However, by accident, I happened to apply the LUTs to that very color chart I had photographed:

I think what we’re seeing here is that the LUTs need some smoothing, and that my training set is incomplete. Or maybe I’m doing something fundamentally wrong?

And for the record, here are a few more renderings of the same file:

(By the way, these test charts look wild, but in practice the effect is quite subtle for most pictures. I guess it’s only the colors I don’t have good training data for that come out strange.)

Are you shooting a color chart of some sort for your training data?

No, just exposure brackets of regular stuff in my neighborhood. In total, currently 35 images, with six brackets each (making 210 images total). It seems to me that the LUTs actually work well for colors I’ve seen in the training data. But uncommon colors are an issue.

Yesterday I reimplemented sacredbirdman’s LUT building program in a different programming language. Not that it needed rebuilding, but that’s my way of figuring out how it works.

It really is a remarkably simple process, once you understand it.

With that done, I’ll try my hand at adding some fancy extrapolation and smoothing.

The programming language? No, python.

What are the next steps for your training set. More images then re-evaluate

Next, I’ll implement some interpolation and extrapolation and experiment with different kernel sizes/smoothing constants. That should get rid of the graininess that currently plague the LUTs and make them reasonably usable.

However, the LUTs are currently rather incomplete, especially in the highly saturated parts. That’s simply because the real world is only rarely heavily saturated, so collecting sample images of that is rather hard. The good news is that these colors in fact are rare, so lacking them isn’t a huge issue. And they can be reasonably extrapolated towards from covered colors.

I think collecting more training samples is actually a fool’s errant. Taking sample images is annoying, and I’d always rather spend my time taking useful photographs with real lenses instead. So instead, I’d write an adaptive pixel mapping procedure that should correct for lens distortion and allow me to use my existing library of pictures. This should also fix the need for the extreme subsampling we’re doing at the moment, and make more pixels available per image.

An alternative approach is to manipulate an existing raw file to contain fake data that iterates through all permissible colors. In the end, this might be easier than doing the pixel mapper, and probably more robust as well. And I wouldn’t have to convert hundreds of images to get a reasonable result.

Wouldn’t it be easier to borrow/rent/buy a color checker or something similar?

Sure. I have one. Two, even. But they don’t provide data for highly saturated inputs, either.

Today I tried various modes of processing fuji files in camera, and it seems that there’s no way of reliably disabling all lens correction

Get a legacy manual lens and a dumb adapter? That’s the only way to completely disable all corrections on a Sony.

The problem with this is getting Hald_CLUT_Identity_12.tif into the Fuji camera as a RAW to apply the filmsimulations to it.

Fuji will allow you to “develop” a RAW into a JPEG after capture like Pentax does?

It’s one of the Pentaxisms I REALLY miss since switching to Sony. I wouldn’t have to resort to crap like Robertson’s algorithm to reverse engineer Sony tone curves if I could re-develop RAWs after capture in-camera.

It should be possible to translate an identity HALD CLUT into a raw image by re-mosaicing it, although you will not have it shaped EXACTLY like a normal rectangular HALD unless you sacrifice some resolution. Also it’s sometimes easier to arrange the LUT a bit differently so that it looks more like OBS LUTs (which are basically HALDs but with the red/green/blue values traversed in a different way such that the image is full of small squares with gradients)

It might be desirable, in addition to remosaicing, to try and fudge some colorspace transformations so that you don’t make the camera choke on unrealistic out-of-gamut stuff… OTOH that can indeed be helpful for figuring out exactly what the camera is doing!

thanks for reminding me I need to push some changes to xphase_hacks/create_jpeg.py at master · Entropy512/xphase_hacks · GitHub so I don’t lose them - I was going to refer you to that as an example of an “alternative” arrangement similar to a HALD, but the actual good stuff is on my laptop back home! Will push it this weekend.

Get a legacy manual lens and a dumb adapter?

Same with Fuji. That’s what I’ve been doing so far.

Fuji will allow you to “develop” a RAW into a JPEG after capture like Pentax does?

Better yet, they provide a desktop app that connects via USB to the camera, so you can use your real camera firmware to batch-process RAWs from your computer!

I was thinking it’d probably be a good idea to re-mosaic each color to largeish patches, so as to avoid any demosaicing weirdness. Given that the X-Trans mosaic is 6x6 pixels, I’d try to write the same color to at least twice that area.

But I haven’t even tried that yet. So that’s all just theory at the moment.

I was thinking it’d probably be a good idea to re-mosaic each color to largeish patches, so as to avoid any demosaicing weirdness. Given that the X-Trans mosaic is 6x6 pixels, I’d try to write the same color to at least twice that area.

Yup. I did something similar with my xphase stuff - I had pixels at least 2 wide, maybe it was 4, to avoid chroma subsampling being a problem.

A level 16 HALD CLUT is likely asking waaaay too much, and xtrans means even a level 12 will be a problem, but you might be able to, instead of doing a proper HALD, generate a set of images that each cover part of things. Possibly in addition to a HALD-ish thing, you might want some basic gradients that focus on smoothly going through all possible luminances to tease out luminance transfer functions.

Well, a cursory look at an uncompressed RAF file only lead me to crash darktable, and nothing else. Evidently pixel modifications in the RAF file are at least not entirely trivial. But I literally only spent five minutes on this.

However, smoothing the LUT cube actually worked surprisingly well. Just adding a σ=4px gaussian smoothing to the LUT removes the egregious artifacts seen above. Of course this doesn’t fill in any of the missing highly saturated LUT entries, yet.

I also played around with extrapolation for filling in the missing values. My initial approach didn’t quite pan out as intended. But then I modified the smoothing routine to weigh sampled colors more highly than neutral filler colors, which works reasonably well.

Another problem were spurious black pixels created by the mapping procedure, for as of yet unknown reasons. They were easy to filter out, however, and the smoothing takes care of the rest. Still, this is something I’ll probably need to investigate some more for perfect results.

Regardless, the resulting LUTs work really well already. Here they are:

As I said, I reimplemented the LUT extraction program in Python. In particular, this gave me the opportunity to do all the image preparation (cropping, downsampling, rotation) in-app, such that the script now just takes two directories full of same-name JPGs. Building one LUT from my 180 images takes about six minutes, which is reasonably quick. 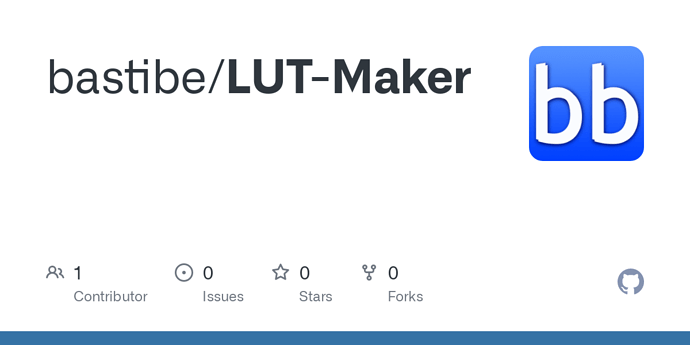 Contribute to bastibe/LUT-Maker development by creating an account on GitHub.

The repo is super bare-bone at the moment, as I haven’t had time yet to make it into a proper project with a license and examples and stuff. That’ll come later.

Next, I’ll get back to actually editing pictures, and see how my LUTs perform in the real world. For the moment, the LUTs seem to be good enough for that. And then it’s probably time to expand the training set somewhat, and possibly implement the pixel mapper.

(While doing the above, some driver conflict crashed my linux box so hard I lost all images from the last month. Bummer. Thankfully, I could just reload them from the SD cards, and darktable had cached all edits in its database. But man, did that get my heart pumping!)

Yup, these look wild. Haven’t tried that kind of test myself but I suspect this might have something to do with the fact that there are so many colors that it leads to few samples in segments… so these samples might get filtered out. Anyway, looking forward to your own experiments