August is hummingbird season in Virginia. Catching these guys means high speed and a lot of bright light, so there’s several things going on with this photo. While the bird is well exposed except for a small section on its breast, some other areas are blown, the flower has some clipped blues and there are out of gamut colors.

I took this as an opportunity to try out the new Filmic V4 color reconstruction (I turned off the highlight reconstruction module), and also did some tweaking with the tone equalizer, color balance, color zones (to selectively reduce the blue saturation) and employed some exposure masks. I’m not sure if I used to new Filmic reconstruction 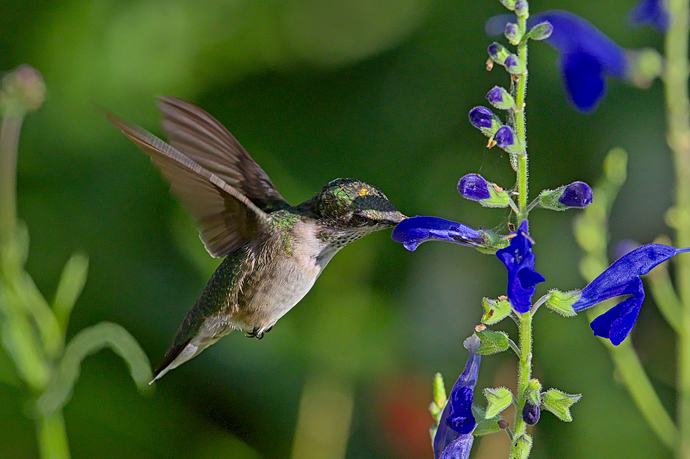 Thank you for the image. 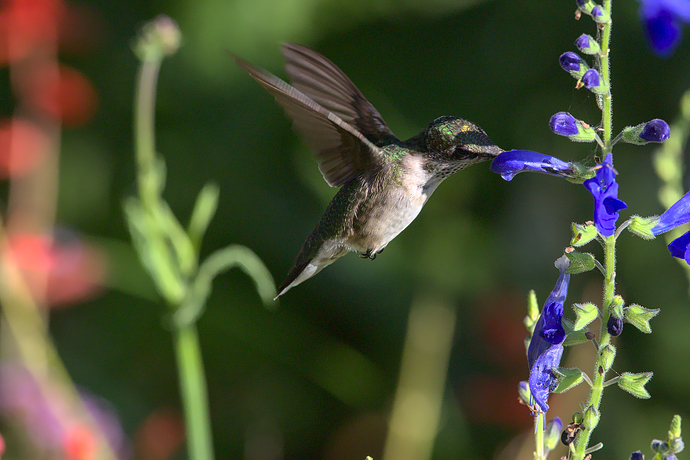 very nice capture! Here’s my attempt with ART (processing parameters are embedded in the image metadata): 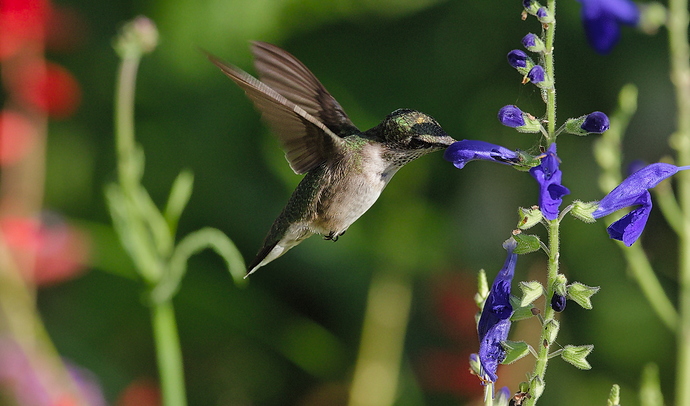 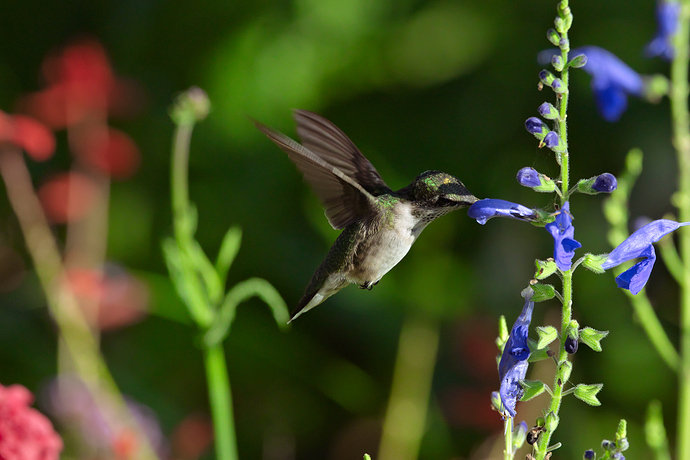 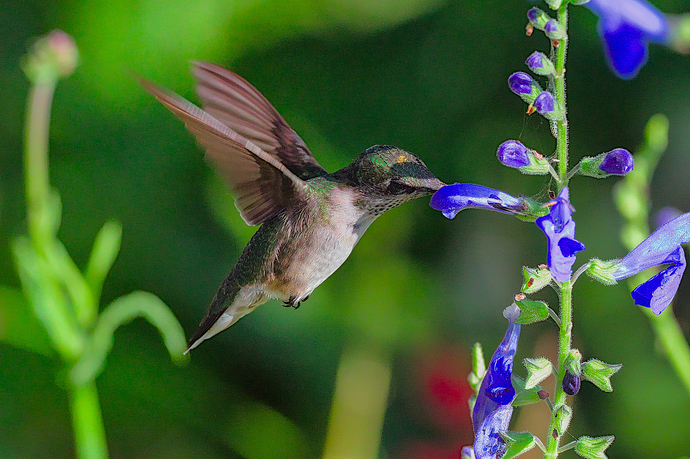 Those blue flower parts are hard to control… 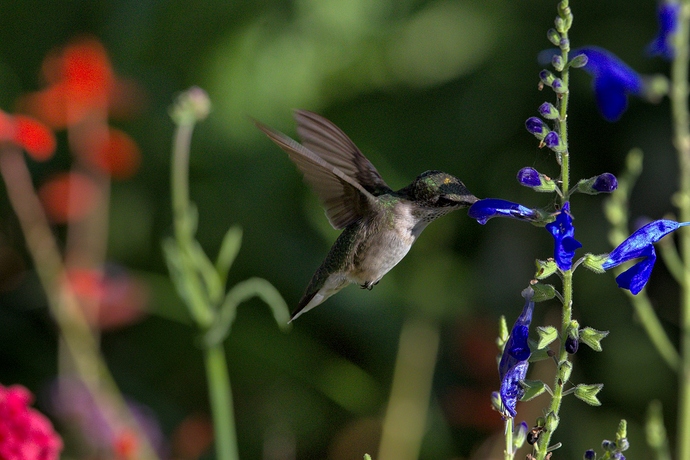 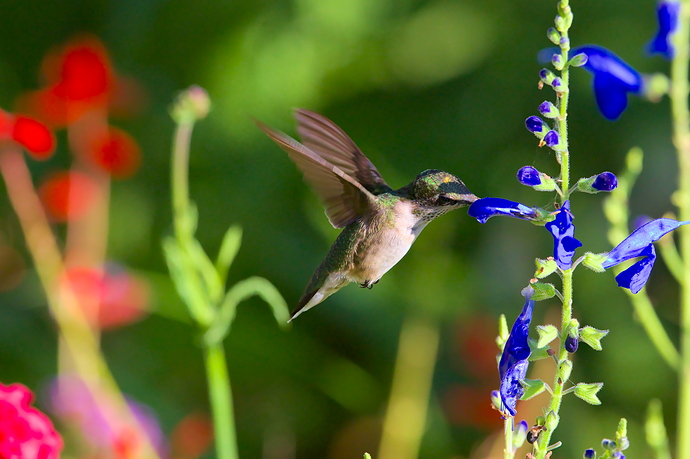 Nice job Jade, I think your version has a good treatment of the bird as well as good control of the blue in the flower. 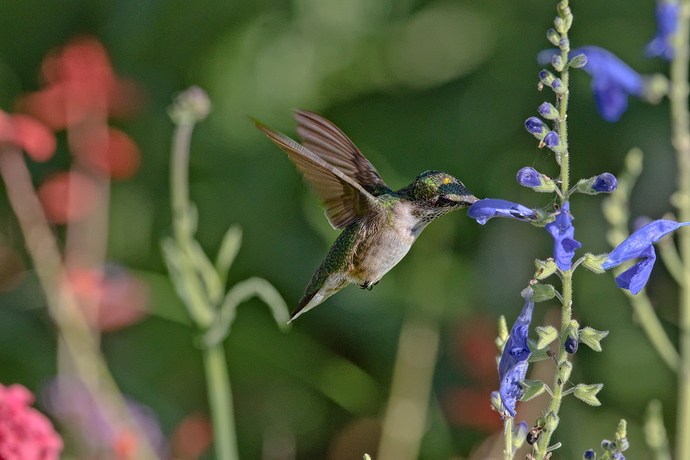 very good shot!. humingbird is sharp even the wings are discernible.
No overexposition, all details are here. no need for highlight reconstruction 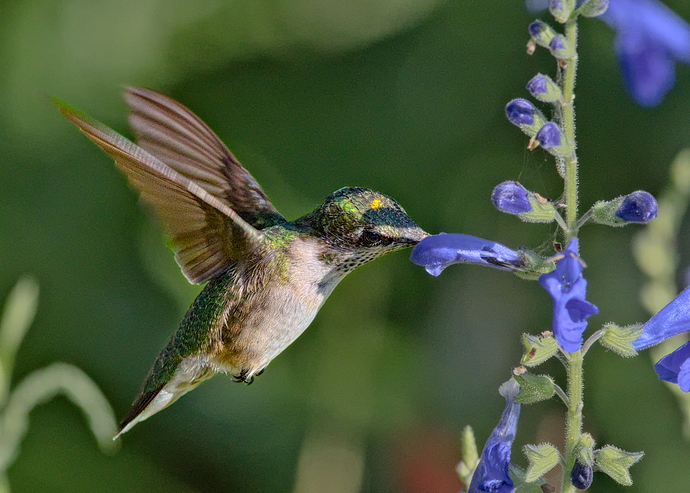 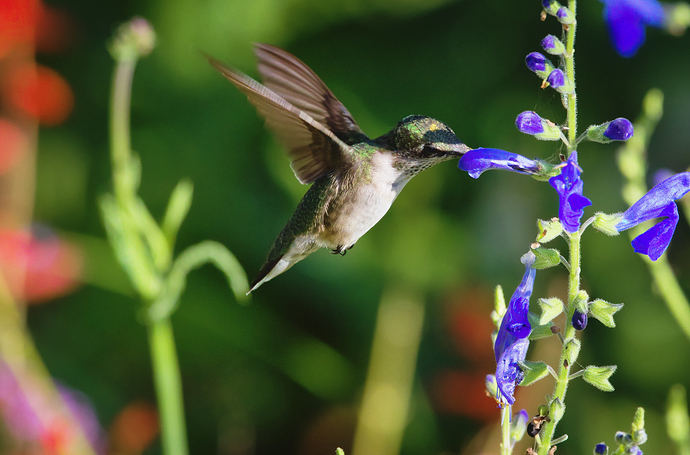 I have no idea what to do about the blue flowers and why those are so saturated.
Reds also appear to be very saturated.
When I lover saturation of the blues, the flowers become red.

Idk, here is my try anyway: 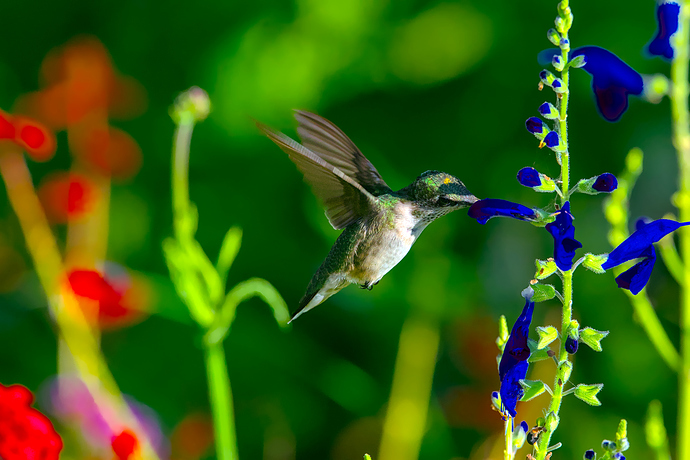 I got “auto scolded” for replying individually to everyone, so I put you all in a single post:

@Jade_NL , thanks. That’s the problem with hummingbirds… they’re attracted to the brightest and loudest colors. I’ve found the camera really has a problem with those deep blue colors. It’s been a real challenge to bring them into control without introducing false color and artifacts.

@grsnovi , hummers are a challenge and they’re a nice break from the herons, egrets and Canada geese (aka flying trash cans) that I normally shoot. Getting backyard shots from my feeder is hard because they’re so territorial and spend more time chasing each other around than feeding. I found that taping all but one feeder hole and having the camera set and ready on a tripod really helps… after that I’ll get about 15 seconds every 20 minutes to get my shot. I took this at a public garden that has acres of blooms, so their territorial behavior isn’t as much of a problem.

@gaaned92 , Thanks! The difficulty was with the blue flowers. I found it hard to get them into a condition where they weren’t dominating the image, showed false color, or looked cartoonish. And, as you said, the picture was largely properly exposed.

I don’t have those problems with the hummers feeding off red or orange blooms… go figure.

@tim, youd did a nice job bringing those blooms under control… I’m looking forward to reading your xmp file

@KristijanZic – that’s what I’m talking about! I was able to somewhat tame the vivid blues by decreasing the midrange saturation in Filmic and once again in Color Zones. It’s been a tough battle with those blue flowers. The hummers sure like them, though!

Nice capture. I did something horrible, I don’t have spectral data for a Canon 800D but I do have some for the 600D. On the assumption that Canon is using consistent Bayer filters in their similar cameras, I made a SSF profile from the 600D and assigned it to this 800D image: 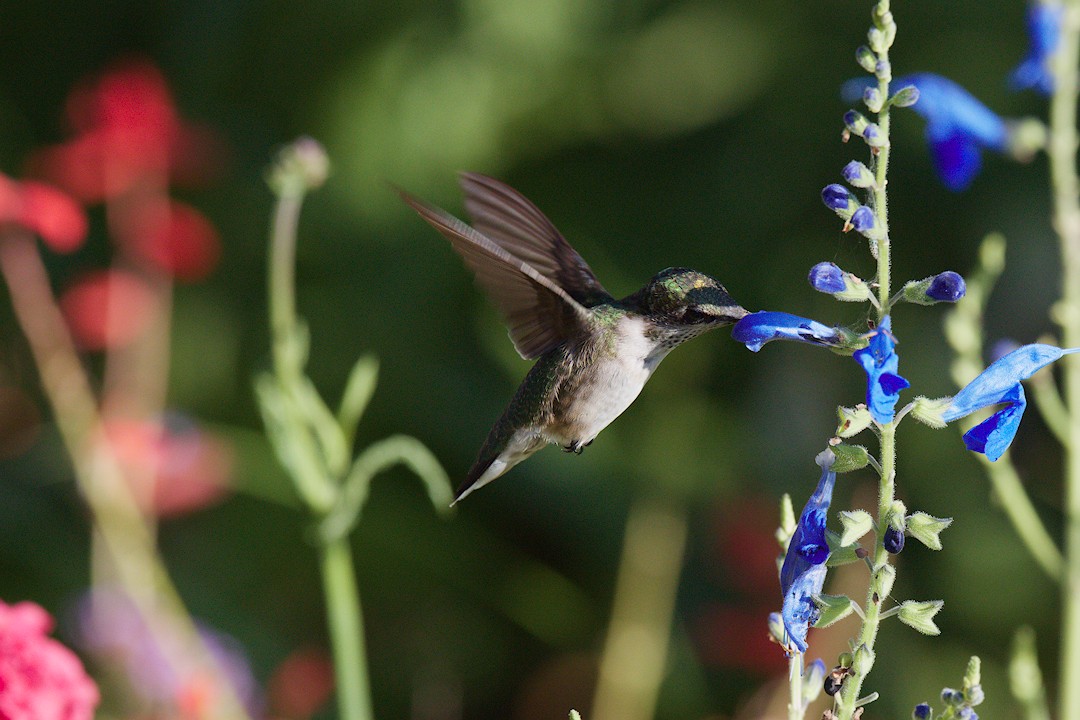 The only other processing is a tame Duiker filmic curve…

Edit: I wasn’t happy with the greens, so I sloped-up the filmic curve, replaced the old image.

@ggbutcher, thanks, I wish I understood what you just said.

My searches are finding that blue clipping is a more common problem than I realized. I’m trying to see how I can better correct that in Darktable. One thing for certain is that I still don’t have the hang of the new highlight reconstruction.

That’s what got me started on these profiles, blue “pileup” at the output gamut boundaries. These profiles made from spectral sensitivity data are LUT profiles, so they can do a non-continuous transform of the colors to avoid that pileup.

Seems to be close enough to your 800D, but YMMV…

The perfect play raw - great subject, with tricky highlights, saturation and noise. I found filmic the key to taming the flowers (as best I could), at the expense of a little contrast. Wasn’t sure if they were meant to be royal blue or violet in colour. Went with violet. 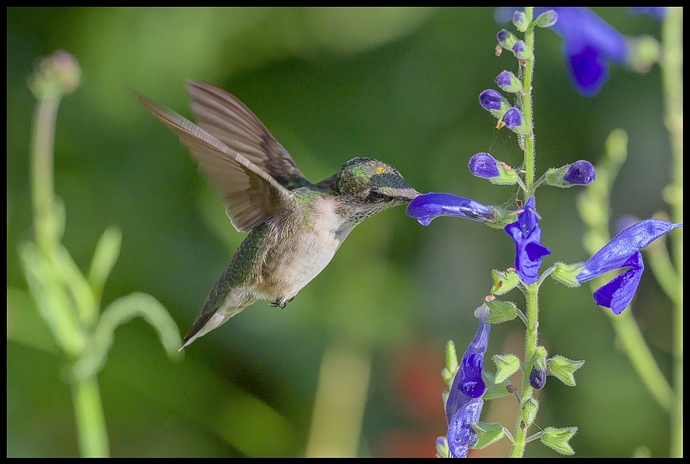 Would love to see a 100% crop on this one comparing the spectral data to the 3x3 matrix for those flowers. 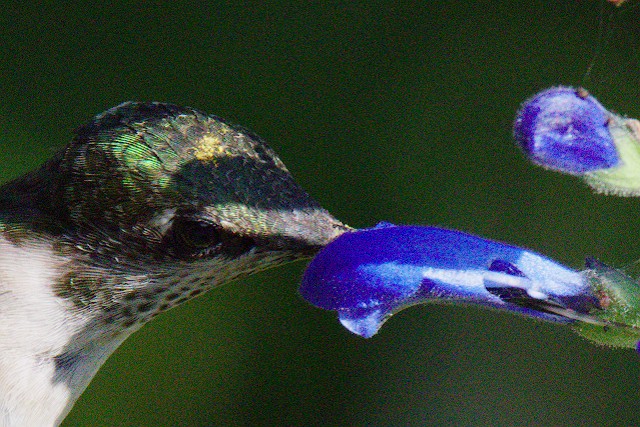 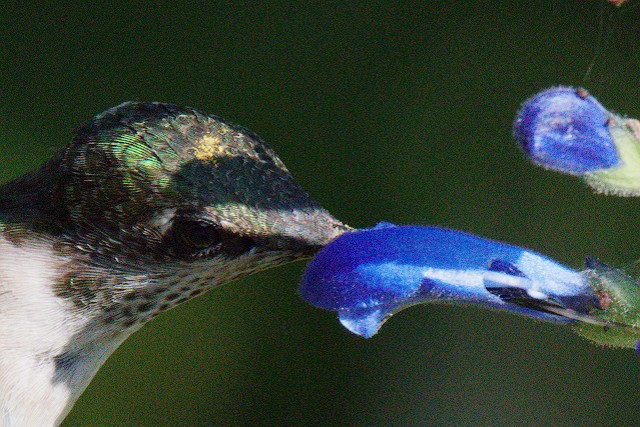 Much nicer gradients and less violet in the SSF. When do they become common place? 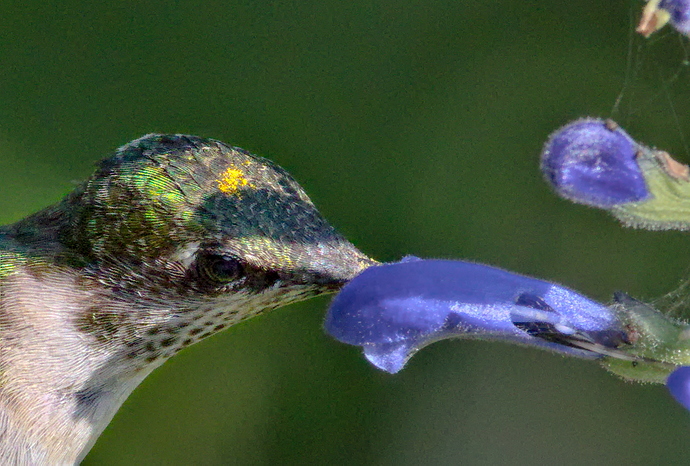 I observed that some Adobe DCP permit to avoid saturated blue