Due to the italian covid-19 restrictions I had some time to play with cameras in my backyard I have a Fuji X-T30 and a Sigma DP2Q.

I’m a seasoned RawTherapee user and I sometimes use Capture One 20, but I strive to avoid windows software as possible. I heard that Iridient does the best job at extracting information from x-trans raw files so I downloaded the demo. Keep in mind that I disabled every form of sharpening/denoising by Iridient.

Well, the results were absolutely unexpected:

I found the differences to be really visible for foliage/grass.

The differences are macroscopic at this 100% zoom: foliage from RT 5.8 demosaic is evidently full of artifacts and really unpleasant. The image processed in Iridient is very nice and I compared it to the same scene taken with my reference for resolution: a Sigma dp2Q developed with Kalpanika (I know I could do slightly better with SPP).

As you can see, the result obtained via Iridient rivals that from the Sigma (!)

Did you try RawTherapee Capture Sharpenig as well? When using it, I recommend to disable the Sharpening in Details Tab of RT

Yes! I tried it, but it produces horrible artifacts. The RL deconv is much better for x-trans.
If you like I could produce a 100% example.

Does irident claim to have developed their own demoasic algorithm?

Apparently, it uses Apple libraries where it can, and demosaicing may be mixed with sharpening, lens correction and noise reduction. I don’t use Irident; got this from reading the literature.

Uhm,
Ingo’s suggestion led me to disable completely the normal sharpen and to play a bit more with CS instead. Well, I’m working on a small laptop monitor atm, but the artifacts (in this particular image) were due to the bad interaction between the two. No artifacts here with just CS.
Moreover, enlarging a bit the CS Radius it seems I’m getting very similar results to Iridient+RLconv.
Later I’ll verify with my calibrated monitor and post the new sample.

It would be great if I could avoid the Iridient step.

OK,
apparently the main issue I reported about the artifacts was due to my mixing CS and normal RL convolution. Up to now, I used to do a slight CS followed by a slight RLconv: as Ingo said, don’t do it!
If you just use CS and play a bit with the controls, you can achieve even better results than Iridient+RL conv.

I tried only two RAF files and I plan to expand my tests tomorrow, but the only strange artifact that remains with just CS is strong moire’ on the rooftops: 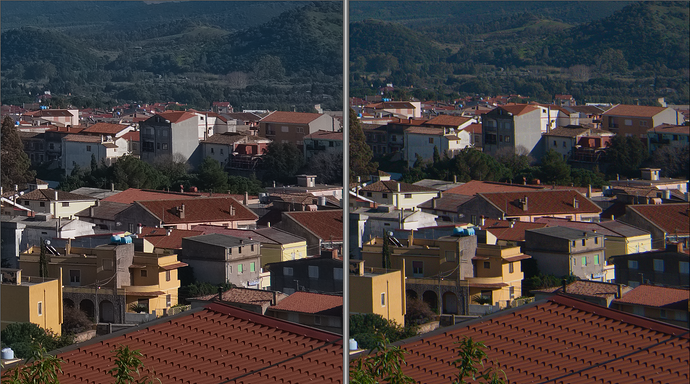 The rest of the image is very similar resolution-wise.

Hope the test was useful for the others!
marco

If you just use CS and play a bit with the controls, you can achieve even better results than Iridient+RL conv

I tried only two RAF files and I plan to expand my tests tomorrow, but the only strange artifact that remains with just CS is strong moire’ on the rooftops:

I once had a similar problem with red tiled roofs. Try to increase Chroma NR a fair bit, in my case it did help without causing too much smear.

I own Iridient X-Transformer. The only real reason to use it as pre-stage to RT is that it can read the lens correction data from EXIF. So distortions, vignetting and CA are corrected automatically and better than through LensFun. For CA on Bayer sensors RT does a great job, but not (yet?) on X-Trans.

what is this emoji, victory?

OK, I have something better to celebrate for…
this whole Capture Sharpening has caught me by surprise…
look at this scene, the city in the background is 45km away (Cagliari): 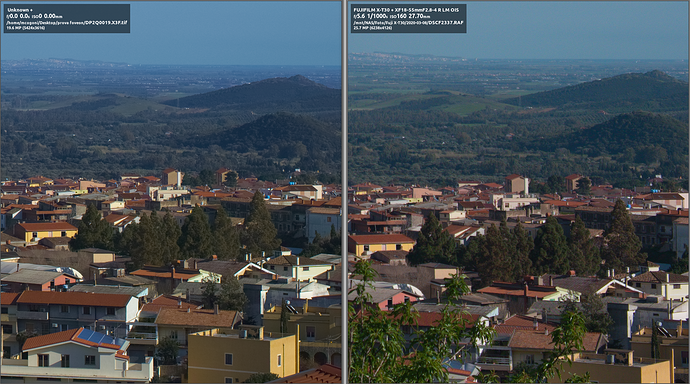 foveon_vs_x-trans1908×1063 3.27 MB
(the 2 pics were taken one minute apart, not exactly from the same spot, that’s irrelevant though)
on the left we have my Sigma dp2 quattro with her glorious foveon sensor, the dream of every landscape photographer - on the right the Fuji X-T30 with its humble x-trans.

Until now it has been literally impossible to obtain this kind of detail from the Fuji, no matter what.
Of course the Sigma is a bit more precise, has no moire’, etc… but you’d really have to zoom at 200% to understand which one is the foveon!

I really believe this could be a strong “selling” point for RT for Fuji people.

I really believe this could be a strong “selling” point for RT for Fuji people.

That’s what I (and others) have tried to advertize several times on Fuji camera forums such as dpreview.

If you want even fewer artifacts (i.e. areas with low detail), switch to 3 pass + fast demosaic.

I rarely see any difference between 3-pass Markenstijn and 3-pass+fast. Is there any technical paper describing the two algorithms?
What I found with high ISO images is that darktable VNG and the new FDC behaves better in these situations. Under RT I sually switch to “fast” to avoid strong unpleasant chroma noise.

ps: do you have an optimized recipe for the Capture Sharpening parameters for low ISO?
I’m using these now: 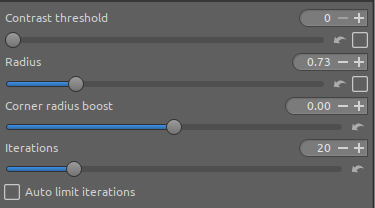 I know it depends on the lens etc, but nonetheless… parameter space is huge

do you have an optimized recipe for the Capture Sharpening parameters for low ISO?

I don’t think that will ever exist. Each image should have its own optimized recipe.

What you can do is start the tool with the auto checkboxes on, and work from there.

If you leave the Corner radius boost out of the recipe (which has its own specific use), you may end up lowering the radius (so the dark halos are not so strong), and the iterations (even with auto-limit on, as that will prevent generating some artifacts). And finally, but not so often, you could increase the Contrast threshold if the effect is too strong in smoother areas, or lower it if it doesn’t have any effect in areas of your interest.

In my experience I haven’t had 2 images with the same settings, although I tend to end up with low radius, and only a few iterations. Usually I don’t need to touch the auto-contrast threshold.

With such low impact Capture Sharpening, I can go and play with the deconvolution sharpening, but using high Contrast threshold values, low radius (around the value used in CS), and high amount. That leads to sharpening the most prominent edges, leaving the small details to CS. It has given nice results, but it takes some time to set the proper values.

On the other hand, there are a few other ways to get perceived acutance (sharpening) on details, such as using Local Contrast, Tone Mapping, Microcontrast, Wavelet Levels, and even to some extent Haze Removal and Soft Light.

Obviously that is not as easy and straightforward as the canned results provided by commercial software, but you will have full control over the final result.

Nein, Iridient is a big ball…

Some time ago I did a thorough test on Iridient comparing it with RT that I have been using for almost ten years. Iridient is useless and now that the new Capture Sharpening is on RT, even less, it is waste of money. Not to mention that Iridient irreversibly modifies the RAW file, it is absolutely not true that it simply transforms it into DNG.