After six months of development since version 0.2.6 was out, I have finally released a new PhotoFlow version, numbered 0.2.7.

Windows and OSX packages are already available from the GitHub release page.

This is definitely the most stable version released so far, as lots of bugs have been cured in both the standalone application and the GIMP plug-in.

Just installed this new version on Windows 7 (64 bit).
It is extremely powerful and impressive !

Once in a while, it crashes as well

For instance, when I have applied the sharpen filter or when I have tried to close the software itself. Later on, I was unable to repeat the same crash.

Tooltips are extremely difficult to read.
In essence, their white background coupled with their light-gray description make them hard to see. At first, I even thought they were not implemented yet…

I have tried several verions of PhotoFlow but I have never been able to use the “Clone stamp tool”.
In short, I select my area and I press Ctr as I do with Gimp (later on I have tried with Alt or right click) in order to select it. Afterwards, I try to apply the Clone stamp tool on the part of the image to correct but nothing ever occurs…
With this tool, I only increase the size of the brush with the other settings unchanged.

Freehand drawing icon looks much more like an “eye dropper”.
With Gimp you select a color on your image with this tool - icon (it works as a color picker).

When I add a new layer > Misc > Digital Watermark, I am always unable to see my text on my image…
I have tried on several images (jpeg, nef etc) with different background but my watermark text is never visible
I suppose it should be available and applied on the right bottom side…
With this tool I increase the size of the text to the top value but my watermark is not applied ultimately.

This beins said, once again, THANKS a lot for releasing PhotoFlow because it is extremely useful !
IMHO, at present, it only needs some polishing since it is alredy chock-full of features

Tooltips are extremely difficult to read.

I have tried several verions of PhotoFlow but I have never been able to use the “Clone stamp tool”.

The source area is selected with Ctrl-Alt-click. I am now starting to put in the GitHub wiki some documentation about the mouse click gestures used in photoflow…

When I add a new layer > Misc > Digital Watermark, I am always unable to see my text on my image…

The idea is that normal watermarks are ugly and also relatively easy to crop/delete, while an invisible watermark in the frequency domain is more difficult to remove.

Tooltips are extremely difficult to read.

Could you re-install photoflow from the package currently available in the GitHub release page, and check if the tooltips are now readable?

Just installed the new version from github.
Now the tooltips are perfectly visible and the new theme is very nice on Windows too !

Just a small problem, the 2 right bottom button (icons) to toggle the shadow - highlight clippings are not clear enough, IMHO.
In short, it is not easy to see when they are on or off.
With Rawtherapee (gtk3 verions) when they are on (active clipping) there is dark background on them. Therefore, you can easily spot the difference at first glance.

Clone stamp tool now kind of works with the ctr+alt shortcut.
Unfortunately, it always crashes when you repeat the clone action in different part of your image. Tried many times and Photoflow always crashes in the end.
BTW, why don’t you use a “classical” shortcut for this tool (that is, Ctr as with Gimp or Alt as with Photoshop) ?

The watermark tool is really geeky

I was aware of the “Fourier method” : I suppose you implemented it from G’MIC.
But, really, If I want to add a watermark, it needs to be a real watermark : with G’MIC you have the “Quick copyright” filter to do so.
With my Raw images I have already added a short “hidden” text note on the Exif metadata. This text is added by my Nikon D700 camera on every image I take.
But yes, this is only my opinion of course

Thanks a lot indeed for your reply !

With my Raw images I have already added a short “hidden” text note on the Exif metadata. This text is added by my Nikon D700 camera on every image I take.

I wouldn’t consider anything in EXIF metadata to be hidden in any sense. Many imaging sites strip EXIF and other image data to protect their unknowning users from exposing themselves. 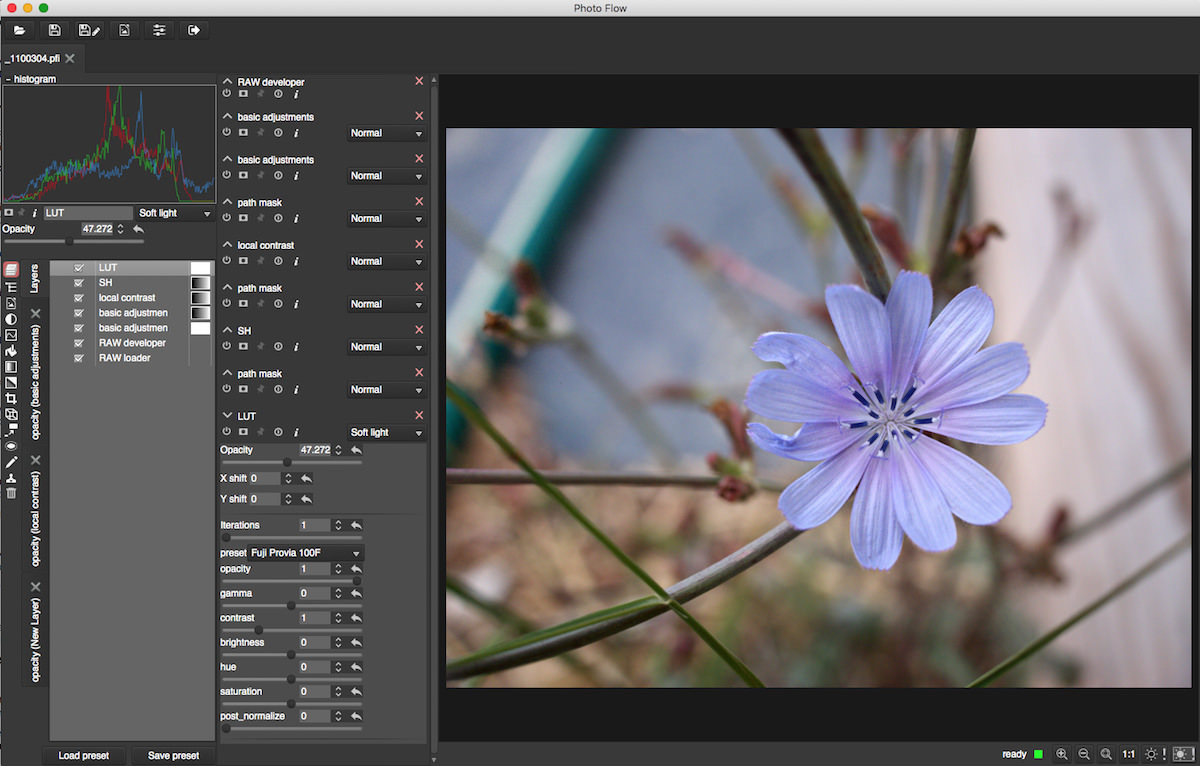 First of all
#Thank YOU very much#

My main issues with the standalone use of Photoflow are speed and responsiveness. I’m not currently at my usual terminal (so I cannot compare it accurately with normal use behaviour) and lack the time needed for thorough feedback; nevertheless here are some quick & dirty notes I’ve taken:

Just a small problem, the 2 right bottom button (icons) to toggle the shadow - highlight clippings are not clear enough, IMHO.

I will see how to improve the “active” state visibility…

Clone stamp tool now kind of works with the ctr+alt shortcut.
Unfortunately, it always crashes when you repeat the clone action in different part of your image.

I hope to be able to reproduce the problem, thanks for reporting this.

why don’t you use a “classical” shortcut for this tool (that is, Ctr as with Gimp or Alt as with Photoshop)

Ctrl is reserved for image zooming/panning: Ctrl-click & drag lets you move the preview area, while Ctrl-double-click toggles between 100% view and zoom-to-fit mode

Alt was my first idea, but then I discovered that some window manager under Linux reserve the Alt-click gesture for grabbing and moving the window. So I ended uo with Ctrl-Alt, which at least works on all systems…

This need to be fixed, I’ll have a look.

@chroma_ghost Thanks for your feedback, very much appreciated!

Now coming to the individual points:

region of interest (ala after effects) for faster partial renders

This is actually what the code already does: only the visible portion of the preview is re-computed when some parameter is changed.

Some slow tools automatically perform caching of their output image (for example the RAW developer, or the local contrast when bilateral blurring is selected). The cached image is computed in the background, and automatically re-computed whenever needed.

I totally agree, and it is in my todo list

is there a grain (dither) tool, like the one in GMIC’s film?

No, this is not existing.

hot pixels does’t work 4 me, the “red lights” still there, Hal wants us all dead

Did you try this with RAW or Jpeg images?

What do you mean? The top layer is at the top of the stack, like in gimp…

creating a group layer could include the selected layers

That’s a very nice suggestion, and should be easy enough to implement

There are two possibilities already available:

Anyhow, I indeed plan to include some additional basic shapes for selections, like rectangles, ellipses, etc…

merging layers would also be useful

This is actually not possible, because the output of a given layer is always computed on-the-fly, except when it is cached

What is a buffer layer?

It is a NULL operation that can be used to “mark” a certain point in the layer stack. In next version, I will add the possibility to enable the caching of a buffer layer, so that one can pre-compute the image at a certain point of the edit for speeding up the computations…

I hope this clarifies most of your questions…

Thanks @Carmelo_DrRaw for the promptly and super comprehensive reply

So far I preferred to focus on stability, and I’ll start doing optimisations on tools that are already rock-solid

could you check the speed when using only “simple tools” like curves, basic adjustments, gradients, uniform fill?

I mosdef will, right now I’m on gypsy mode so can’t do

Did you try this with RAW or Jpeg images?

Raw and I ended up using the cloning, I’ll test it more thoroughly and post examples… same as above

There are two possibilities already available:

the gradient tool has a “radial” option
the “path mask tool”

Gotcha, the path one I knew, but not the radial gradient, NEAT! On choosing radial, controls stopped being interactive though

ZOOM
I understand the limitations, for clarififying my POV, in a often used task liked zoom in/out and panning instead of having to move the button to + or - loupe it seems the combination (key) + wheel or even mouse’s wheel alone would be faster, as ctrl + left click already works perfectly panning the image. No big deal

Regarding “region of interest” - something that I see myself only using with sharpening or like so filters - I have a doubt; is this true when rendering 1:1 preview? Does it render only what’s (cropped) inside program’s window?

LAYERS
Also clarifying, on the left panel (effects) the order is “logical”, but then on the right (expandable) area they appear in reverse order, which - at least in my very subjective view - makes contra intuitive movement of having to go further and further down when in need of changing settings. Also no big deal

SCOPES
As you seem refreshingly open to suggestions, a read of RGB’s values would also be super useful; even if it’s not live and/or on by default and we have to google it on/off. I wonder why there’s not a broader implementation of waveform and RGB parade scopes…

If it was me, I’ll add vibrance to basic correction, move desaturate (which is nice) a bit further down and make space for a propper colour balance tool’s direct button, but I can hardly multiply 9 by 3

Regarding histogram, could be bigger (resizable) but far more importantly could be read better, either with a lighter background or an option for having a white solid in joined values.

Okay, have to run, big thank you 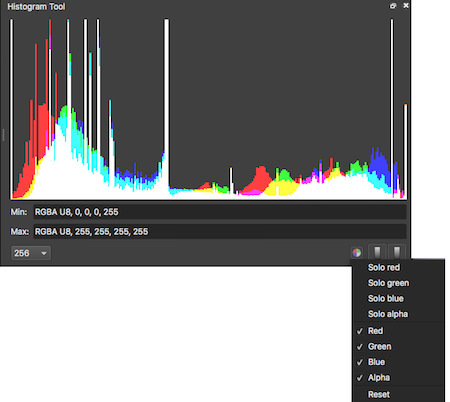 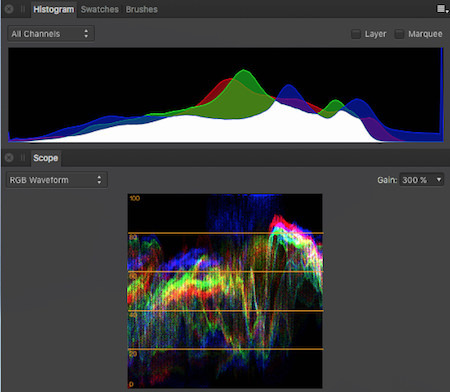 Regarding “region of interest” - something that I see myself only using with sharpening or like so filters - I have a doubt; is this true when rendering 1:1 preview? Does it render only what’s (cropped) inside program’s window?

Yes, it is true also at 1:1 preview. However, one should take into account that many filters are slower at 1:1 preview, because of the way the computations are done internally: for example, a 100px blur at 50% zoom level is in fact applied as a 50px blur to the already-zoomed-out image.

Moreover, some tools just don’t do anything if the zoom level is too small, because the effect would not be visible. For example, a blur of less than 0.5px is skipped when generating the preview (but still applied when exporting the image to TIFF or Jpeg).

Concerning histogram and RGB color readings, the latter are much higher in my personal TODO list… the histogram is basic and ugly, but it is there, while color readings aren’t…

Hello Carmelo
I´ve installed the Photoflow 0.2.7 on Windows 10 64bits.
The principles are those I´ve hoped from Gimp for years. Bravo !
Not completely obvious but the logic comes … and I´ve started to create some presets.
Today I´ve created a new one based a tutorial for Gimp from Nine Degrees Below site (tone mapping).
It works when I create it. But once saved, every time I try to load it Photoflow crashes.
What is the most convenient way to send you the corresponding file (if you want of course) ?
Again, Great job !
Philippe

You can upload the file here or use a service like filebin.net and link it here. 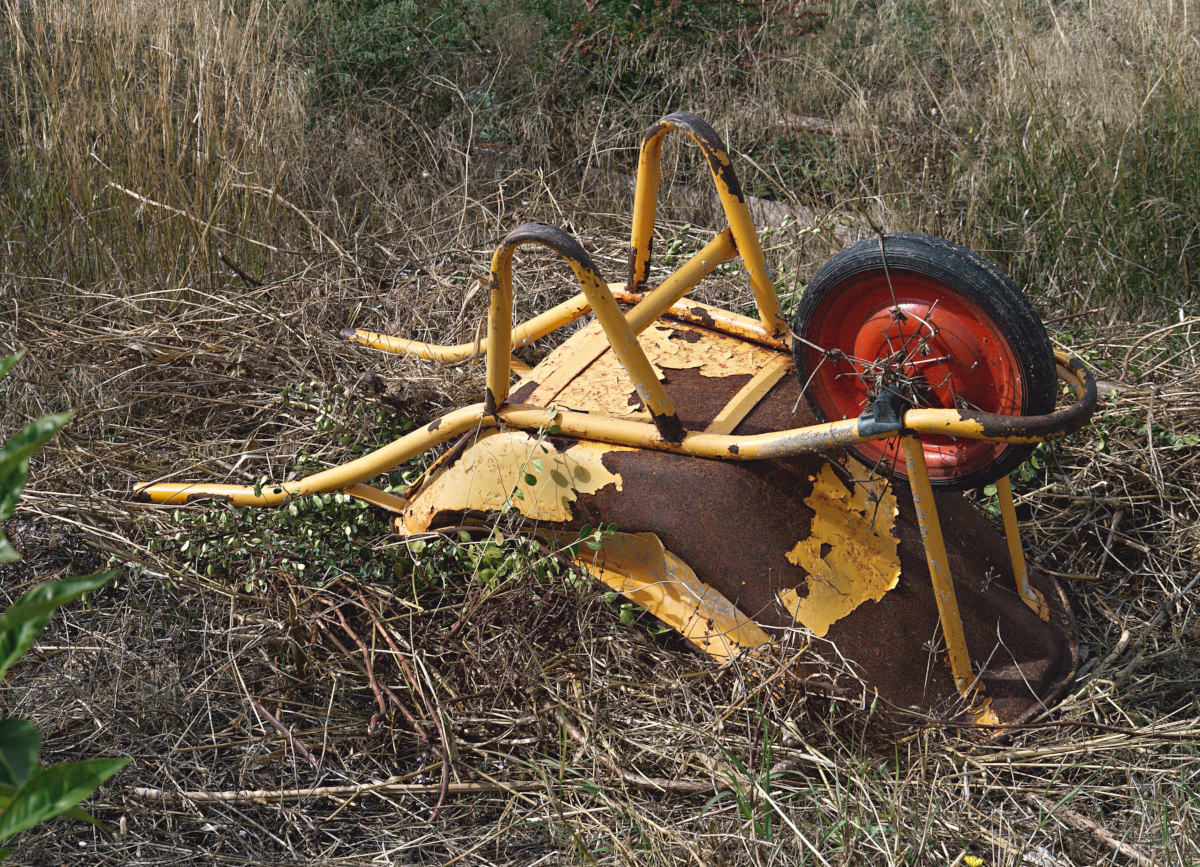 About the preset which crashes. Doing the same without changing the names of blocks makes it loadable without any issue.