As expected, patdavid banned zorki. patdavid offended probably. No one can criticize the terrible site that he drew. What a terrible insane audience on this forum? It seems that for a long time no one wants to communicate here. I wish this forum is completely dead.

Farewell to the clowns.

Great new release as far as I could check until now. And a great new website!

Btw: What I like in this forum is the respectful and helpful stile of communication besides the excellent content - Thank you all!

That statement is not true.

And I was afraid of such animation, variegation and bad taste. Please announce a fundraising for hiring a designer so that he makes a pleasant and functional site.
The old site was much nicer looking, more functional and did not irritate the eyesight.

For all the snarky comments that have befouled this thread, I for one would like a comment explaining this. What do you mean by animation? I don’t see anything animated except for the simple carousel. Can you explain why you find this offensive? And what in your opinion makes this site less functional than the last one? (for comparison, the old site)

To be fair, in the feedback, I briefly listed accessibility as one of the considerations that I would have liked to be taken into account. A carousel of large bright images isn’t exactly friendly in that sense and not everyone has assistive plugins or apps installed. We didn’t get off to a good start. I hope you guys calm down and be kinder to one another.

Even though I like the new website, I agree -the caruosel may be distracting to some.
Maybe put it longer down to the site.

I do like the way Exposure has done it. 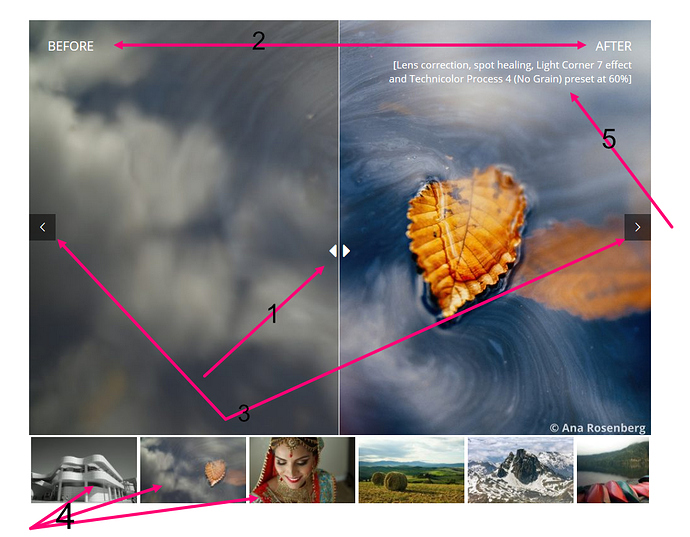 1 Move the slider to the left/right to show 2 before/after
3 Move to the next picture by pressing here , or here 4
5 shows what’s been done ( in this case Lens correction , spot healing …)

Here is the link to the website. You have to scroll down to it .
I’m not using that prog

Turns out that person is not new around here. Known to us not only from this forum but also from GitHub, he has been communicating with the same corrosive attitude for years, mixing valid feedback with insults and throwing tantrums whenever things don’t go exactly his way, ending his messages with statements as if to justify the condescending tone (“Sorry if I just said what I see, but did not do the exercises in political correctness.”). Not the sort of infantile behavior one wants to put up with in what should be a fun project one does in one’s free time. And here he is at it again, under a new identity. @yoyadasaw AKA @zorki AKA @geoderix No, this behavior should not be rewarded with attention.

I agree… we should not feed the trolls…

@zorki @yoyadasaw - perhaps you would like to hear someone else opinion. I came here the first time because someone criticized FossHub, you can take a look here: fosshub.com, what is the point?

I don’t expect every person to like FossHub, but I know that I appreciate those who are willing to send a constructive message. If your first reaction is to attack those who put some effort into realizing than what would you expect? I admit that if you struck me, I instantly jumped into defensive mode, I believe it is a natural human reaction, and there are a few trained not to.

About the new RawTherapee design I will say that I like the new design better than the previous one. It was complicated to understand what was the latest version, but again, this is my humble opinion.

You don’t like the new design. That’s great so let me give you an analogy.

2007-2009 - The first FossHub design was based on Andreas Viklund, a well-known designer
2009-2012 - The design was remade by a great designer - Gabriel Agu who is a Senior UX Designer at Booking . com
2012-2018 - A designer working for Adobe made new web design.
2018-now - we have a web designer that works for some large brands and another one who works on our future projects.

What I am trying to say is: no matter what you do or who you hire, people will criticize you because they don’t like the new look. Each time someone complained about the new look.

It’s like cars, nature, women, men, everything else. We all have a different taste so you can’t expect people to like your work.

My two cents: attacking people won’t bring anything good. Launch a constructive criticism, and if others share the same opinion, you will be able to convince people to change at least something. However, if you find yourself in the minority, I guess that’s it.

Have a great day all of you!
Thank you!
Sam - FossHub

Thanks to all the developers, 5.7 so far works great,
And the new site looks excellent, thanks to all for your hard work!

Maybe next time someone throw their “impressions” in the way @zorki did, we should just ignore them after their second message. Almost a dozen of posts have been wasted in trying to discuss with a troll.

Back on topic… I like the new website very much. The only thing I find a bit disturbing, maybe, is the big color wheel (RT’s logo) at the top left and right of the main page, which competes for the eye with the carousel.

I just got here, looks like I missed some fun.
I don’t mind criticisms at all! It’s the best way to get better.

With that being said, I can’t see any comments from @zorki being made in good faith.

Don’t feed the troll.
(as @sguyader has already noted)

Also, registering multiple accounts on the site to grief people is not cool. @zorki and @yoyadasaw.

To be a little bit nit picky, regarding the screengrabs chosen for the carousel, one should try to make the selected tools/filters representative of what is shown in the image. Two examples:

Oh, last small improvement I could see, is to put a translucent background behind the arrow controlling the carousel, to make them stand a bit more. Or maybe push them to the sides. At first I didn’t see them, particularly on the first, colorful and busy screengrab.

Edit: it’s maybe not right topic to share possible improvements to the RT webpage, admins feel free to move it to a more relevant place.

I do like the way Exposure has done it.

Thanks! This is something I was thinking about adding at some point. Comparison sliders like that are neat for sure.

I was considering if the news section should stay or not, but I’ll discuss and see.

So report any website issues in the issue tracker there.

Or fork and patch! The website is not complicated

One has. It’s not always possible. Other times, when possible, it does not make for an aesthetically pleasing screenshot.

the tool panel on right shows the Color toning tool enabled, a curve is drawn for the mask, but actually no mask is shown, and no color toning is applied to the image

Yes there is toning applied, just not hue alteration - the saturation and offset are the active components, and the hue mask confines them to a specific area, all visible in the screenshot, though it’s not possible to show the effect using a single image (and a before/after would be ugly and still not show the effect clearly - I tried). Would be possible with a “before|after” slider-box thing, as mentioned in previous posts.

Yes, they weren’t used at all, since this was now a JPEG. It was 3AM, by then I had spent some 10 hours working on the 5.7 release, I needed a few screenshots, and I wasn’t going to re-stitch the panorama just for this.

I agree that there is room for improvement, but don’t think thought and effort didn’t go into what’s there. And it’s not always possible to make nice screenshots of a program that I just released an hour ago, since by that time I would have had to delete the old and intermediate files used in the past (e.g. the 32-bit panorama TIFF) to make room on disk, and end up only with the final result JPEG.

but don’t think thought and effort didn’t go into what’s there.

I didn’t think that at all! And I understand very well what you said.