How do I import selected photos from a folder into RT?

Hi @87s, welcome! The shortest answer is: you don’t. You just open RawTherapee, browse to the folder, open your images and start editing. RawTherapee stores the processing parameters in a sidecar *.pp3 file next to your images. There is no database to which you import.

Have you read our getting started page? http://rawpedia.rawtherapee.com/Getting_Started

In which case, is there a way to filter/hide images from the Rawtherapee viewing panel?

You can take a look at the File Browser documentation, where you can read how to filter your images:

You can filter the visible photos by using the buttons in the File Browser’s or Filmstrip’s top toolbar, as well as by using the “Find” box or the “Filter” tab. Possible uses:

Is it possible to move the histogram to above the editing modules, so I can close the left panel for a larger work space, but still view the histogram whilst I work?

In Preferences, untick the Histogram in left panel option: 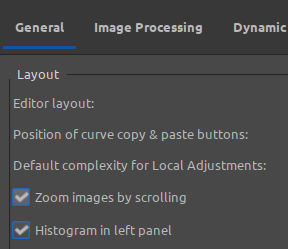 After restarting RT, the histogram will show on the right panel

After restarting RT, the histogram will show on the right panel

You don’t even need a restart for that.

You guys are great. Thanks a lot for your help. I would normally delve into these things in the manual straight away, but I have a job to complete, and just needed some basic set-up info qucikly to get me started.

I see there are lots of indepth settings that are not available in LR (I use 6 standalone). What are your personal opinions on RT as opposed to LR for processing raw images to a professional standard? I have used LR for 10 yrs, and use it for my prep stage, before editing in Affinity Photo. (I specialise in performing arts shooting, creating promotional and dossier material.) Unfortunately my laptop died and the one I have borrowed won’t allow the installation of LR (long story).

Again, I’m grateful for your time.

@87s for me, this is very easy to answer. When i heard about RAW-files, I started a hard way learning on RT and loved it. Then somebody told me, that LR was much more professional and i had to try it. I really tried it, but got disappointed. Of course, there are a lot functions making it eaysy to use, but i missed the possibilities and depth from RT so i gave up and will stay with RT. Thanks to all the programmers doing a very great job with this!

What are your personal opinions on RT as opposed to LR for processing raw images to a professional standard?

I’m not a professional, so these are just my thoughts. Moreover, each pro has its own preferences and needs.

If you take 1month to learn RT and you like to be in control contrast, artifacts, sharpness, and to certain degree, fidelity of colors, then you won’t go back to LR.

If you need a workflow with a couple of sliders to have the job done, then RT will struggle to be your dream raw processor.

Do you want to be in control of the end result of your images? Go for RT. Otherwise, let LR do hidden procesings for you…

What are your personal opinions on RT as opposed to LR for processing raw images to a professional standard?

You’ve come to the right place in this forum to ask such a question! It’s a many-facetted one as well. You can probably find something of use here: https://discuss.pixls.us/search?q=lightroom

As a toolbox RT is certainly capable of delivering the same quality as Lightroom, and in some respects surpassing Lightroom. The learning curve may be steep though, since we’re just a rag-tag bunch of part-time developers making something interesting, and not masters of UX

If you need a workflow with a couple of sliders to have the job done, then RT will struggle to be your dream raw processor.

I’m not sure that’s true. I use very few sliders in my typical workflow. The way profiles, including automatic ones, work also ensure that you can stack and mix presets which is quite efficient.

If it’s a portrait I now have a profile that places a local editing spot where the face usually ends up. This then has a few defaults configured. My architecture shots have the perspective correction set to Camera based and the crop disabled but pre set to 4:3 for getting rid of ground when photographing without a shift lens.

I find the ability to load presets with disabled settings very useful. One click then gets you almost all the way if you decide to enable the module.

This video “Raw Therapee Basics for Lightroom Users” by @Andy_Astbury1 is a good place to start. https://www.youtube.com/watch?v=mPXej7vcaBA

I won’t argue that point of view.

But we may agree that you’ve had to learn RT and try different procesings until you’ve reached the point you’re already in.

Anyway, I’m quite confident that RT is way better than LR.

But we may agree that you’ve had to learn RT and try different procesings until you’ve reached the point you’re already in.

It also depends on what kind of PP you do. If you are after a saturated poppy look perhaps Adobe has it better automated but I wouldn’t know.

Thanks for the feedback. So far I am liking the prospect of using this software, but currently I have one apprehension; sidecar files. Nikon View FX started using them a few years ago, and all of a sudden I realised I had 1,000s more files to handle, to move, etc, when I needed to update, move or re-arrange my catalogue. Some got lost, some got deleted.

Any tips on managing these? Are they automatically updated if the file name is changed? Has anyone encountered issues with non-compatibility after updates? (I have read the manual about sidecar files). Can they all be placed in a single folder, or do they always need to be in the same folder as their parent image? I’ve noticed that some images carry two: pp3 and xmp.

Here’s a link to some of my work, in live performing arts: 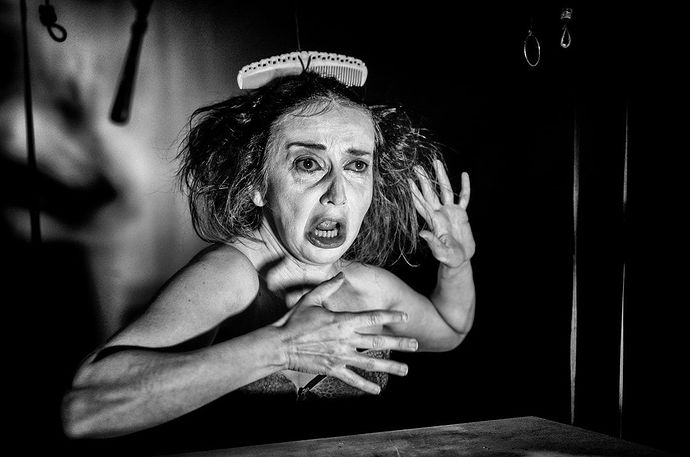 Here is a personal selection of my work in performing arts photography, most of which has been captured during live performances.

Any tips on managing these? Are they automatically updated if the file name is changed? Has anyone encountered issues with non-compatibility after updates?

I import my files from the sd card using RapidPhotoDownloader which renames the files and puts them into folders according to my templates. I don’t rename or move the raw files after this. Since the sidecar is associated with the raw filename I’ve had no issues.

When I need multiple versions say colour and bw of the same image. I make a subfolder BWpp3 and copy all the pp3’s into it before proceeding to do my colour edits. When I want to revert/tweak the bw versions again i make a colourpp3 subfolder copy the pp3 into it and then load the profile for the relevant image from the BW subfolder. It’s robust but not sophisticated way of managing multiple edits of the same file.

Output files (mainly jpegs) I move around and rename when needed. Since the exif data is still there and my files are organised in YEAR/MONTH-DAY/ folder I can always find the master raw file when I need to.

So I’ve not had any issues with sidecar files. If you rely on tagging and adding metadata in a third party software you need to be aware that Rawtherapee is not great at handling metadata.

you need to be aware that Rawtherapee is not great at handling metadata.

… but this will change soon.

This function (regarding the filmstrip), I have quoted below from the manual, has odd behaviour.

When I use the arrow keys on the keyboard, the image highlighted in the filmstrip moves to the next (or previous), but the image in the editor does not change accordingly. I can only move to the next (or previous) image in the filmstrip and the main editor viewing panel if I use the arrow buttons on the lower tool bar, which disengages the keyboard arrow keys, unless I click with the mouse on a filmstrip image. Is it possibe to configure the keyboard arrow keys so they conform to the sa me synced control of the tool bar arrow keys?

(Also, although it is very useful to have the hover-over instructions appear by the controls as I am familiarising myself with the interface; by using the onscreen arrow keys a large black instruction box is ever-present, which is a bit distracting).

When I use the arrow keys on the keyboard, the image highlighted in the filmstrip moves to the next (or previous), but the image in the editor does not change accordingly.