The .cli file that is supposed to be activated prior to opening RT is NOT present in my download. WHERE can I obtain it? I do not want to run RT without installing it as the vid says do. Please advise, as I’d like to begin using it as soon as possible. Thanks.

This is the link found for the .cli file. I can NOT download it. Here’s the link for the file. When I click ‘view’ it says ‘not found’.

So: IS IT SAFE to open RT without copying what appears to be a non-existent file to the addy shown in the vid or not? Really - this should NOT be this big a problem for anyone interested in using this ware. If the file is no longer applicable or needful, please tell me. I’ll just get on with things and not worry about it.

If you want builds from @HIRAM you can get them here: kd6kxr/ – Keybase.pub

Thank you so much for such a quick response. I’m a bit puzzled tho’ becos I don’t see the file for the link I posted (the .cli file that needs to be run first). There are versions for older and newer OSes but none for mine (macOS 10.12 Sierra). I have no idea whether to proceed or not without the .cli file being installed first, as the vid directions were fairly specific about NOT opening RT without so doing.

I am not sure what the .cli file i that you’re talking about, but perhaps someone else will.

It’s the file referenced here in Andy’s tute about installation prior to opening and operating the ware: 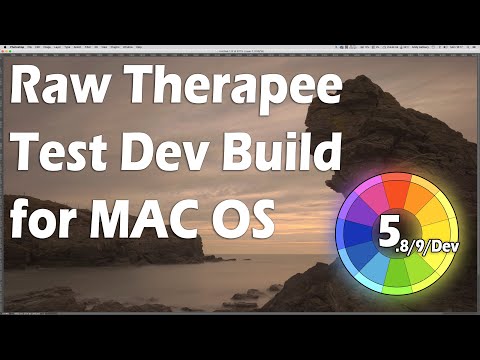 It’s referenced at the 6:57 mark, and I can’t find the thing anywhere. When I have found it, it doesn’t download - period. It LOOKS as if it’s downloadable, but after directing the highlighted text to ‘save’ and designating a location, there’s nothing there.

CAN RT be safely run WITHOUT first installing this damnable file?

You only need it if you want to run RT in terminal; i.e., without GUI (visuals).

So, it’s SAFE to install it in Applications, copy it to the Dock, click it and just RUN it WITHOUT using the .cli file? Please advise. I didn’t realise RT could be run from the Terminal.

That is if you want to run it in headless mode, without seeing anything. Some people like to run batch processing with an PP3 sidecar without opening the GUI interface so that it runs faster. You could do that in the main application too, so unless you have a very specific reason, you won’t need to ever use CLI.

Your question about safety is odd. What are you afraid of? Anyway, RT does not need CLI to run. You can do without it.

Thank you for the insight. I’d not have had to trouble anyone had Andy made that point clear in the vid. There was never what might be called ‘fear’ - only a hesitancy that the ware wouldn’t work correctly since Andy was quite pointed about making sure to not open RT UNLESS the .cli was installed first. He may want to consider doing an edit to clear up that point. Now I can use RT without a concern that I’m wonking something up.

No problem. It is okay to be uncertain and wonderful that you are asking the right questions. I can vouch for @HIRAM’s builds. Whatever is being provided is enough for most users. If you discover any blockers (issues that prevent the application from running), do let us know. Thanks!

Huh?! There is no way that copying the CLI suddenly enables running the GUI version of the program. Right? Or is this a very weird macOS quirk?
I’m not sure what Andy’s doing here… and why.

I’m also a bit baffled that instead of asking his question on the forum , the information is found in a 3rd party YouTube video .
But if that information turns out to be incorrect or outdated (you know, what happens in a few months basically ) the forum is used to ask questions about the video .

Seems backwards :). A quick search for running Rawtherapee dev builds in the forum would probably have resulted in quicker and more up2date information I’m guessing.

Yes most people can ignore the -cli…
Maybe I should just not include it in the app distribution zip. Let me know what you think.

If the .cli file serves a useful purpose, then there’s no reason to not continue including it. The only change needed is adding an explanation of the .cli’s purpose & function, and when it should be used. At present, the notification appears to apply to ALL users under ALL conditions. That’s what caused my misunderstanding about ‘when’ and ‘why’ it should be added. No exceptions were noted regarding its use. Clarifying WHEN and WHY the .cli should be invoked should solve any future confusion (like my own). Thanks for an excellent vid, and thanks to all who contributed to my enlightenment.

This all goes back to Testing RawTherapee on macOS 10.12 Sierra and higher (Intel Code) - #11 by Andy_Astbury1

I installed the first Mac Dev build and it would not open.

I then uninstalled the 5.8 public release - dev build still would not run.

All I eventually did is follow the instructions I was given in the text file:
*An unsigned -cli is in the zip along with the .dmg. *
*You must install the app from the .dmg into /Applications and copy the -cli to your /usr/local/bin. *
The -cli will load its libraries dynamically from the app in /Applications.

Do I ACTUALLY need to do both? No idea as I’m a camera bloke not a computer person. But on my machine the 5.8 public release .cli appeared to be stopping RT Dev from launching.

I will say that I’m on the third version of the dev build and have not found it necessary to update the .cli.

That looks excellent. Had I read something like this or had it been explained this way in the vid, it would have staved off any possibility of confusion about using the .cli file since I knew I wouldn’t be using a Command-Line Interface. That would have allowed me to simply install the app in Applications and be done with it and not wonder if I was doing something that would cause RT to not function properly by not installing the .cli. This appears to be a perfect way to handle the problem.