Seems adobe is feeling the heat from their subscription pricing model. I wonder why this fellow is really giving up on making video’s for gimp usage. 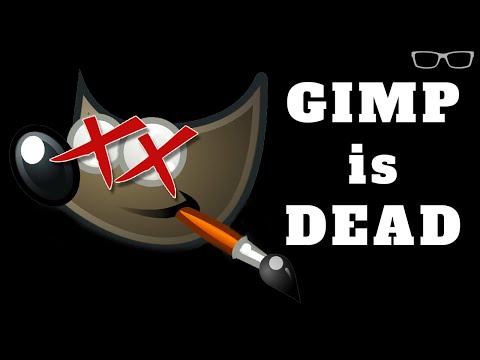 He’s not the only one, I did not watch the full video but at least the content seems to remain available in this case. The following channel entirely removed all darktable and gimp content recently: https://www.youtube.com/channel/UCLmNIvFpmQnBw3W50ly9vsw.

Looking at the “new” content of the latter channel, I would guess this step is all about earning money with the channel, and there’s probably nothing bad about this in general. However …

I really wonder why f/l/oss software has such a bad reputation amongst end users (I mean, all of their work is highly dependent on f/l/oss software anyway, check the license terms of any big proprietary software and you will likely find hundreds of free libraries referred in the majority of cases … and then the cloud, and the app ecosystems, f/l/oss software anywhere). Every stupid photoshop forum in a language spoken by 300 people gets more attention than pixls.us.

Yes, it’s true, I am also waiting for more non-destructive editing abilities in gimp (may it be adjustment layers or another paradigm) since more than 10 years, and the pace of feature development can be depressing (this is not a criticism towards the devs, I am well aware about the reasons and by myself not able to change it), but it is already extremely capable for so many tasks. And darktable’s pace is really amazing. At least I had wished that the channel owner would have explained his reason for removing all gimp and darktable content.

Every stupid photoshop forum in a language spoken by 300 people gets more attention than pixls.us

I feel too many people are just sheep and follow the mob mentality. How often I have heard the saying “you get what you pay for”. Not true. Gimp has nearly every feature I need. I own, but never use Photoshop. Darktable is my #1 editor and it does non-destructive editing and has fantastic localised masking. It just doesn’t have layers and I not sure that would be desirable or possible. That is when GIMP comes into play when I need layers and masks.

Great job to all the foss developers. The only subscription I want to pay for is Netflix.

Appalling is the word

Every stupid photoshop forum in a language spoken by 300 people gets more attention than pixls.us

Probably true unfortunately… Looking at it from another angle, there’s a lot of… um… sheep (I was going to say something worse) out there, and it doesn’t really matter what they think!

One thing may be that something like affinity photo has been offered several times a year for like 25 bucks US. The first time was during the pandemic. I bought a copy because I was curious and it was barely more than 2 pints of Guinness…

I’m not saying that it is better or whatever. I am not sure what GIMP offers that Affinity doesn’t but when something like that happens interest in a FOSS project that might seem quirky to the general public might diminish when an alternative is available that cheaply… I would use either as I don’t do much that needs layers but it could be that it still impacts traffic and with the general overall lack of buzz around GIMP as well…

affinity photo has been offered several times a year for like 25 bucks US.

This is for a perpetual licence. So it is probably a reasonable investment at that price if it has some extra features that are missing in FOSS alternatives. I just really hate subscriptions that want to bleed you wallet dry for the rest of your life. I occasionally use my perpetual licence for Lightroom to do exposure merging or panorama stitching, but once they went to subscription and stopped supporting new cameras I run straight into the arms of FOSS.

One thing may be that something like affinity photo has been offered several times a year for like 25 bucks US.

I actually use Affinity Photo - It’s the only major non-FOSS graphics tool I use. It and ART are my current workflow. I also have, and for years have used, GIMP. I’m no master of either. I have no plans to remove GIMP and will keep it up to date. Overall, the vast majority of the software I use is either FOSS or a premium version of a free-community / paid-pro pair, e.g., QCAD Pro. I also have RawTherapee, ART, darktable, DigiKam, XnView MP, FastStone, LibreOffice, DPP, MSOffice (2010) and others installed. Choice is nice.

In the case of Affinity Photo, my use of it now is based on several factors:

* Before retirement I was a Solaris / Linux admin for 20+ years. I like and prefer Linux, and all things being equal I’ll go back to it. Just right now, they’re not so equal, so to speak.

GIMP-wise, I say all that not to put it down at all - I’m still very interested in it and will stay up to date. I wish the GIMP project all the best in the world and may well use it again in a more major way. I can appreciate the realities of a complex project like GIMP, but I too have been waiting for features related to photo retouching than (for example) to digital art creation. That’s just my personal focus and others have other interests.

I’ll continue to use and promote many FOSS tools, though. It’s just a matter of best-fit, for me.

This may be out of context because I skimmed the thread and didn’t watch the video.

My hot take is that paid software have official and unofficial evangelists — yes, that is the job title. People make gazillion dough piggybacking on stuff. In contrast, F/LOSS advocates tend to be all over the place and also confident that F/LOSS speaks for itself.

And yes, the commercial/corporate world borrow/use/copy heavily (if not completely) from F/LOSS. Just look at PS: when it runs, first app that launches is convert.exe (i.e. imagemagick, which does have commercial licensing work with vendors, but it roots are in F/LOSS).

And yes, the commercial/corporate world borrow/use/copy heavily (if not completely) from F/LOSS.

Indeed. A quick scan through the Affinity license document turned up these (and there are probably some I missed):

(i.e. imagemagick, which does have commercial licensing, but it roots are in F/LOSS).

I’m not sure what “commercial licensing” means. ImageMagick can be used by anyone, at no charge, including use within commercial products. See ImageMagick – License

And, of course, ImageMagick is open source.

Sorry, I meant it works with commercial vendors. I will change it to avoid confusion. Thanks for clarifying to the masses.

I’ve never really used GIMP seriously - mostly just the odd graphic or image composite. With that in mind, is there anything it can’t do that, say, Affinity Photo can? (EDIT - I mean for people who use these programs properly) I know a few forum members use AP - I’ve actually just downloaded the trial to see for myself. It would take me a while to find my way round though, and I don’t know what features are commonly wanted.

Hope this is in context - just curious.
Afterthought - maybe he answers my question in the video. But he lost me in the first 30sec as the youtube page was thrown out the window!

You probably know about these astro resources …

Yep. I just need to get my butt motivated to put up with either the Louisiana mosquitoes and/or dew… Depending on season… Get out and astro-shoot…

Yep. I just need to get my butt motivated to put up with either the Louisiana mosquitoes and/or dew… Depending on season… Get out and astro-shoot…

He’s gone all unhinged in the comments. Gimp is ‘garbage’ now. He’s removing all Gimp content, won’t promote it but going further than that as he’s trying discourage others from using it. He decided to add Darktable to his rants calling it and Gimp ‘inferior’.

‘That’s a bold strategy, Cotton. Let’s see if it pays off.’

I really wonder why f/l/oss software has such a bad reputation amongst end users (I mean, all of their work is highly dependent on f/l/oss software anyway, check the license terms of any big proprietary software and you will likely find hundreds of free libraries referred in the majority of cases … and then the cloud, and the app ecosystems, f/l/oss software anywhere). Every stupid photoshop forum in a language spoken by 300 people gets more attention than pixls.us.

IMHO, it is all about marketing and advertising. Unfortunately.

In addition, mostly bad reputation seems to come from: (a) oh the installation is so complex, article xy told me or (b) the UI is so complex and mit user friendly at all.

To (a): obviously not true.

To (b): well remember,eg, the discussions about darktable‘s UI? Well it is complex… but have you seen the reaction of a newbie user when starting photoshop for the first time?