What's the purpose of Local Contrast in ART?

As a result of Rawtherapee (RT) not fully supporting a new camera I acquired I learned about ART and have been experimenting, a bit, with it. As it happens RT has many tools that I have yet to learn anything about and therefore do NOT (yet) use. Therefore, the missing ones are NOT a big concern for me.

However, one tool I use quite a lot and find quite useful is called “Local Contrast” which appears right under the “Sharpening” tool in the RT menus. There is a similarly named tool in ART but it is located on a tab called “Local Editing” which apparently is new in ART (i.e., does NOT exist in RT). The mechanism/parameters used to control the “Local Contrast” tool in ART are completely different than the similarly named tool in RT. As a result I have to conclude they function differently.

Unlike RT, simple turning it on does NOT appear to do anything (at least in the few cases I’ve tried using it). This raises the question, is the “Local Contrast” tool in ART intended for the same purpose as in RT? If so, I’d be very interested in learning how to use it but that is where the absence of documentation becomes a significant problem. Is there reference information available of some kind that would enable we uninformed users how to use it? This appears to be a case where Rawpedia is NO help.

ART and RawTherapee aren’t the same in many ways. One of the main differences is that ART wanted to be simpler in its use. Simplified and as an example: ART has one
way of handling Local Contrast and RawTherapee has 4 (that I know of and not counting the contrast settings in, for example, CIECAM and Local Adjustemnts - Color Appearance):

In that regard ART’s Local Contrast module has parrallels with RT’s Local Adjustments → Local Contrast & Wavelets tool, which can also do masking, multiple instances and is neutral when you activate it.

So there are parrallels between ART and RawTherapee but the modules, even though they have the same name or sometimes look the same are not the same.

Hello this is my interpretation. As far as I understand, the tool is similar to RawTherapee but in a graphical form. There is a graph in the local contrast tool. If the line is completely flat it, will do nothing which might be what you are observing. Add a point to the line by clicking on it. Points on the left side of the line act on fine details, points to the right act on coarse details. Drag the points upwards to increase local contrast, downwards to decrease it. Hope that helps.

Unlike RT, simple turning it on does NOT appear to do anything

Move this stuff up to get some effect. 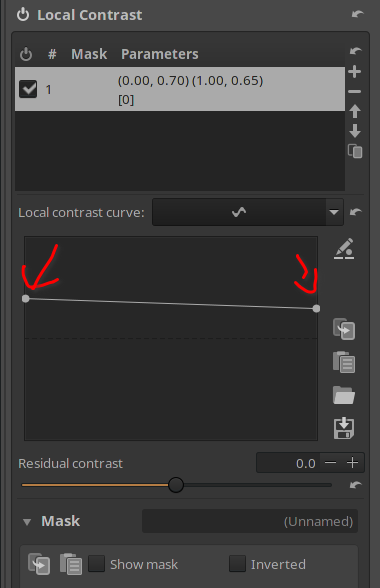 ART and RawTherapee aren’t the same in many ways.
…

As I said, nothing wrong with simpler in my case. Of the RT tools mentioned the only one I recognize as having used is “Local Contrast”. It is something I almost always try after pretty much being done developing the image. It often produces a slight improvement. When it does I might fiddle with the settings a bit looking to refine if possible but often it is just a matter of whether or NOT to turn it on. Therefore, I’d have to give the RT version of “Local Contrast” that I’ve been using credit for being much simpler to use.

That interesting. I always thought it was tonal in ART not details…so LC in shadows, mids or highlights…depending where on the curve you bump or drop it…

ART has masks that are a bit more like darktable including a brush mask… I think but I am not certain that newer dev builds of RT have local edits that are more like the control points that were used by NIK. There are nightly builds of RT that you can grab…one of these might support your camera now if you want to check…

Hello this is my interpretation.
…

Thanks. That brief description is quite helpful but based on all the other options there must be a lot more to the tool. Even though I’d say simple is good truth is that developing raw files is a lot more complicated than just sticking with the camera developed image to which some minor tweaks are pretty simple to do using other software. Unfortunately, I’m probably pretty low on the learning curve and if if fiddling produces good results I’d really like to better understand what I’m doing.

OK I will try and check this out. Perhaps Alberto @agriggio could clarify this if he has time.

I have described the basic use of the tool so it will affect the whole image. Many of the other options are for masking the image so that you only apply the effect to a selected region of the image. These masking tools also work for colour correction, texture boost and smoothing so you have a range of flexible tools that can be applied to just parts of the image.
The various masking options take a while to learn but are very useful. Perhaps take them one step at a time, and don’t feel you have to use every slider.
It’s true that the documentation for ART is far from complete as it is essentially a one man show but there are some helpful tips and tutorials at
https://bitbucket.org/agriggio/art/wiki/Home

Hi,
What you wrote is correct. I’d also look at the comment of @apostel338 for a visual how-to.
If people are confused by the “do nothing by default” behaviour, I can change that easily.

Thanks Alberto. I think the ‘do nothing’ default makes logical sense. However I guess some people who don’t know how to use the module might prefer a ‘typical use’ default when you first activate it so they can see what it is capable of. Judging what that typical use is might not be so easy though…

Just a thought: maybe you could add a tool tip or a graph background to indicate that user interaction is necessary for it to “do something”.

If people are confused by the “do nothing by default” behaviour, I can change that easily.

Please don’t change the default behaviour of the local contrast.

May be adding some text in the “help bubble” to explain what’s happening.

I think leaving the curve doing nothing by default is better, because this tool can be used either for increase, or decrease of local contrast.
For example, on (soft) images from vacations (landscapes, architecture…) I sometimes increase the local contrast to give more detail “pop”. But for portraits or people photography, I often bring the local contrast down, targeting the on the skin tone, to give a subtle “beauty” effect.

How can we guess what this tool is most used for? Increasing or decreasing? If the default is changed to “do something” by default, we’d need to guess how it is used in general.

FYI everyone, it is possible to store any default settings in most of the modules - using automatic dynamic profiles. I’ve been using my own default settings for several modules, it is very convenient. This applies to both ART and RawTherapee.

Regarding masks and desire to learn about them. Following advice provided herein I did look at the wiki. One of the articles is titled “Area masks: creating polygonal shapes”. The first sentence is ‘Create a new polygon shape by clicking on the " Add Polygon " button.’. However, that raises the question, ‘what is the “Add Polygon” button?’.

With that said, by inspecting Rawpedia I was able to discover that masks are used in RT even though I don’t think I’ve ever done it. Is it possible that masks in ART have some similarity to masks in RT? If so, would spending some time to learn how they work in RT provide knowledge that is helpful when using ART?