Where is the "legacy" configuration button gone?

I don’t like color calibration, because it produces, e.g. Olympus cameras, wrong colors often.
Now, with preset “color calibration” off white balance remains “camera reference”. I want to
have it at “shot”.

As far as I know it’s still in the preferences, under the processing tab? Chromatic adaptation.
I’m on 4.2… don’t know if the newer dev versions have changed. 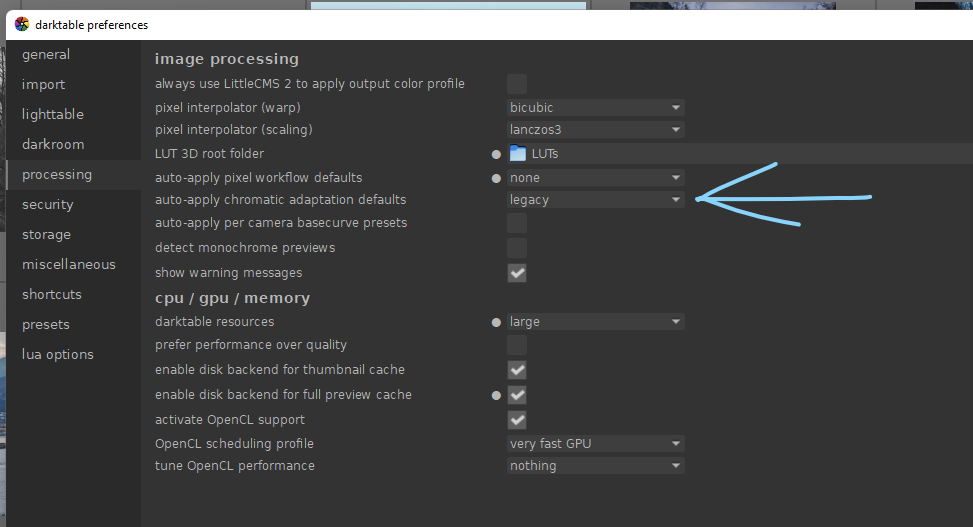 Ah, I see. In 4.3 it’s gone. Hopefully it will be back in the official release. Thank you!

in my version, latest build, it’s still there; you choose between filmic, sigmoid, legacy or none.

you choose between filmic, sigmoid, legacy

Those are the workflow settings, not chromatic adaptation.

The rework of the workflow preference has been merged some days ago. See discussion at po/rework workflow & module groups by TurboGit · Pull Request #13234 · darktable-org/darktable · GitHub

From the above mentioned pull request :

The chromatic-adaptation is implied by the workflow setting (removing
one preference). And is “modern” for all scene-referred workflow.

Is that permanent? I’m not sure, but can module presets replicate the functionality? Because I prefer legacy wb but modern everything else🙃

And we use : color calibration for both scene-referred workflow / white-balance for display-referred. This is implied and this is the only workflows darktable setup automatically. A user with different needs (so probably have a good technical background) can mix whatever he want by selecting none and adding auto-apply presets for whatever module he want to use.

The trouble is, one may have a camera for which the reference white values are wrong (Sony and Olympus users seem to have problems). This does not imply that those users also have the knowledge to fix the issue by creating a pair of custom presets, one for white balance, one for color calibration, that switches back to the legacy chromatic adaptation settings for those problematic cameras.

Hopefully it will be back in the official release.

And we use : color calibration for both scene-referred workflow / white-balance for display-referred. This is implied and this is the only workflows darktable setup automatically. A user with different needs (so probably have a good technical background) can mix whatever he want by selecting none and adding auto-apply presets for whatever module he want to use.

That’s a solution, I think…

The solution is to use the new workflow as we have redesign/simplified this part.

Do you think those problematic cameras will be fixed?

With dt’s defaults, picking an area from the blanket’s label in color calibration:

Disabling color calibration, picking WB from the same spot in the white balance module:
(compared to the 1st image, exposure slightliy adjusted to match up with that)

IMO there were some very good reasons for keeping the CAT and workflow preferences separate – they both require a pair of modules working together to achieve their default settings (white balance / color calibration, and exposure / filmic, respectively) and a user might have good reasons to deactivate either one (see above conversation). These settings are different to things like the ‘auto-apply sharpen’ setting (whose removal does still make sense) as they can’t be easily reproduced with a simple preset on a single module.

I wonder about this, I owned the ILCE M2 (it is broken now). With this camera colors were fantastic with filmic 3,4, 5 and CAT. Absolute no problem, even without fiddling color issues…

Those are the workflow settings, not chromatic adaptation.

That’s part of it. Both scene-referred filmic/sigmoid are using color calibration & display referred is using WB.

What was the logic behind linking those (otherwise unconnected) things? For example, to have filmic/scene-referred workflow and legacy CAT, a user is now required to manually set modules on every image (since it is not possible to set WB with a preset).

I haven’t built for a week or two… so the only way to use legacy wb only now is a preset and the go in and set to as shot???

Maybe I am misunderstanding??

It would seem at least that legacy wb is a good fall back to the ground truth as shot wb for each camera whereas relying on the d65 numbers provided by DT doesn’t always achieve that.