"Where to find the latest version of RawTherapee", and other questions

I would like to address a few common questions and remarks regarding downloading RawTherapee and future updates.

I want all the features now!
Every night the current ‘bleeding edge’ development version of RawTherapee is built and provided here for download. This version can be used alongside an installed release version of RawTherapee, but please read RawPedia for some caveats. Thanks to @Carmelo_DrRaw for fixing the Windows build, which was broken!

Users @gaaned92 and @HIRAM kindly provide automated builds of their own for Windows and macOS, respectively. They should work very well.

Compiling yourself is not that hard
Whenever you feel like experimenting, or to ensure you get best performance for your specific hardware, you’re encouraged to compile RawTherapee yourself. We provide clear instructions for many Linux distributions, Windows and macOS. It should not take you more than an hour to have things up an running.

I’m on macOS and compiling and running RawTherapee is hard
Yes, maybe (1, 2, 3, 4, 5), but generally things should work. The newest M1 hardware is not yet supported. Any help to make that happen is much appreciated.

Why has there not been a release for over more than a year?
A valid question. The fact that we’re not many people and doing things in our free time should answer most of it. Development certainly hasn’t stood still!

When is the next release going to happen?
Soon™, but certainly before the end of 2021. We are working hard to polishing new features. You can track the progress here and see which issues are currently tagged for a fix before the next release here (not all of them may be addressed, but helping us out is always much appreciated!).

I’m happy to answer any other questions related to this topic. 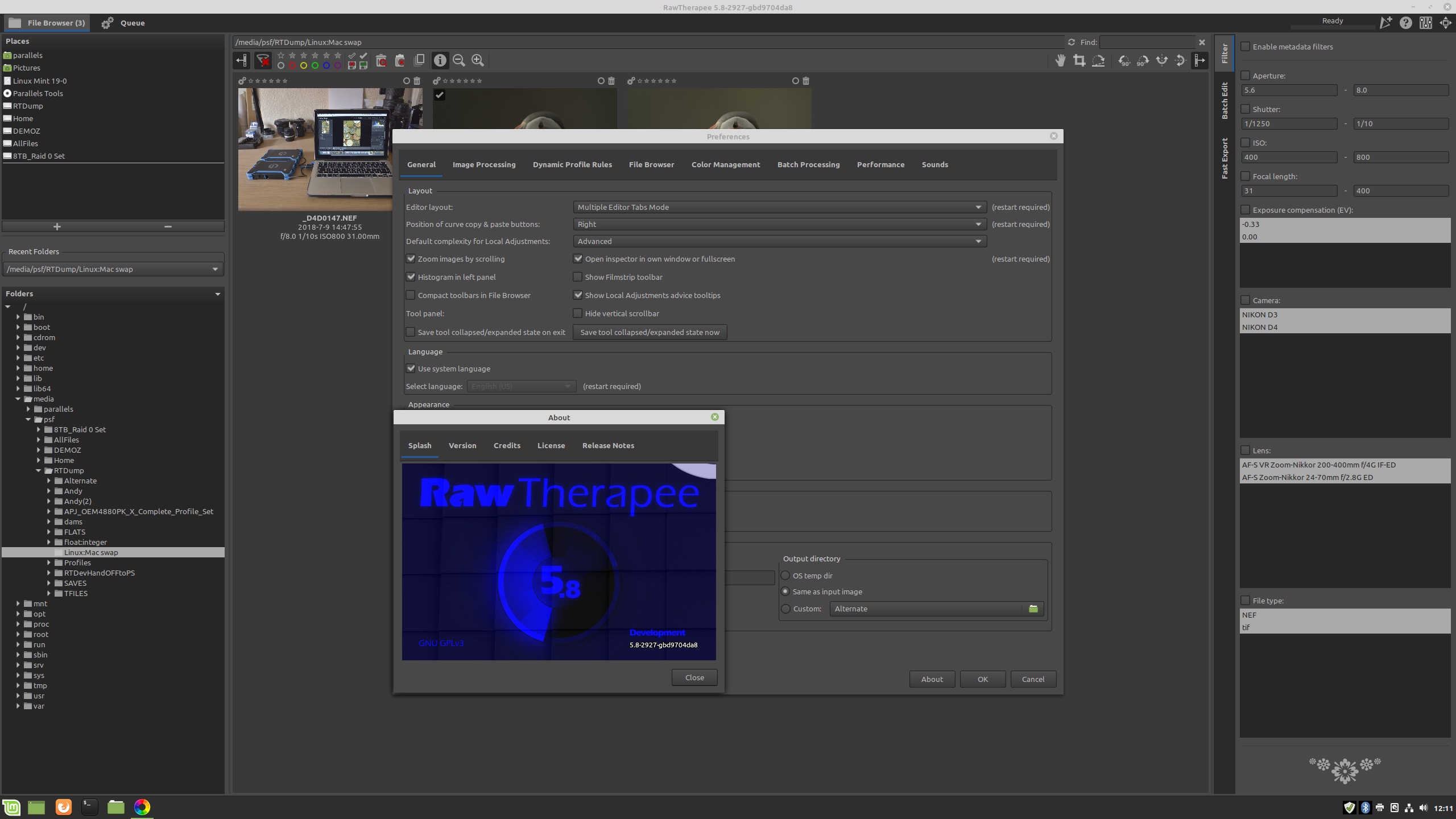 Has anything changed between the two - because I can’t see any differences, but my eyesight is not what it used to be?

I’ve just spent 3 hours trying to break this current dev build - and can’t. Everything seems to be working just fine.

Speaking as a USER, I’m pretty certain that all RT users would be happy with this running on their system.

Would it really take 7 months or more to ‘convert’ this to Mac and PC ?? I nearly had a stroke when I read your post…

As a user I do understand that cross platform “homogenization” is a lot more complex than most would credit.
You point out that no dev team member uses Mac - I hate to be the one to tell you, but if you want to bring RT to the attention of ‘the more pro end’ of the user market then this is a problem, because even though the global MacOS user base is between 10% and 15% of total, it’s considerably higher amongst pro image makers.

Of those pro end Mac users the majority are still on Intel - most folk I know just find M1 desktop machines for too expensive and tend to adopt something of an ‘if it ain’t broke don’t fix it’ attitude to upgrading - this is why I suggested a form of Beta release for 5.9 just to get it out there.

There are obviously not enough members of the dev team to generate a 5.9 release that is 100% cross platform in a timely manner (7 months is not timely!) so getting a Beta 5.9 out there with support for Windows and Intel Mac might be a good (even though perhaps seemingly divisive) idea.
Once that is out, M1 support could be worked on, and maybe this might even relieve the dev team workload by breaking it up into sequential chunks??

The way things are, Windows will always be the largest user group, followed by Intel Mac, with Linux and M1 Mac trailing behind - Linux due to lack of support from other big software developers, and M1 Mac…well!

The other thing is, I would not let gaps in RawPedia hold up release - it’s not stopped things before now has it!!!
And the faster RT 5.9 gets let out into the big wide world, the faster I can do videos and folk can follow along with me.

But if I keep doing videos and folk keep asking me WHEN 5.9 will be available - and I tell 'em NOT before Jan 2022 then the faster potential users will vanish into thin air.

this is why I suggested a form of Beta release for 5.9 just to get it out there.

I have to agree with Andy and as I have said before, the sheer volume of new features probably justifies putting this out as a beta anyway so that everything can be thoroughly tested by the community.

Exactly what I think as a new user for Rawtherapee!

Has anything changed between the two - because I can’t see any differences, but my eyesight is not what it used to be?

The spot removal tool was merged into dev

My post is not concerned with how things should be, nor with how the team ought to handle their userbase and release cycle. I am trying to be transparent about the limbo situation we are in - whether you like the situation or not.

Well, that’s told me good and proper has it not.

Would you like me to keep my opinions to myself from now on, after all, as a simple RT user trying to get more people to use RT by making instructional videos, what the heck do I know about anything…?

I thought creating a buzz and desire to try RT amongst my contacts, members, subscribers and followers was what you wanted from me - silly me.

@Andy_Astbury1 I admit I was annoyed by your first post and therefore a little snappy, I hope I can explain. My post was meant as informative, whereas I interpret your post mostly as argumentative. Two very different kinds of messages, each with their own merit (in fact, I agree with most things you say). However, I thought your post detracted from the meaning and intent of my post and I didn’t like that.

With regards to your opinions and your ambassadorial role, I’m not questioning the importance of those. I hope you will keep both active! Lately we just not seem to be communicating the same sort of message…

Finally, while I have a good view of what still needs to be done for the release, I am not in the position to make much headway with the actual releasing process. That task still rests on the shoulders of @Morgan_Hardwood. He has this to say about it.

I am not in the position to make much headway with the actual releasing process. That task still rests on the shoulders of @Morgan_Hardwood

Maybe we should move some parts of the process to different shoulders (yours and mine). Just a thought… We are a team. If a team members shoulders are not strong enough (as for example my shoulders the last 2 months or so), other shoulders could help…

hi there,
I can understand all the different views and contributions and I think you all are right.
Now I hope that my humble end-user opinion is also welcome.
I think there should be a final point at which no further development is started, but “only” stability is tested. Of course, new features such as spot removal or abstract profiles are ingenious extensions, but they also have to be tested again, translated into all languages ​​and ideally also documented in all languages ​​(RawPedia).
My suggestion: Put a line here and now, adjust some standardizations in the GUI and open the ‘default’ for translation. Andy has already mentioned his opinion on the current stability of the software, and also my experience is that this dev RawTherapee is wonderfully stable.
With this, it should be possible to release the next step 5.9 (due to all the new features, i rather would call it 6.0), within several weeks… i hope

I would like to help with the translation (to german) and documentation as best I can… I am sorry, its probably too late to become a software develloper in this life …

Now I hope that my humble end-user opinion is also welcome.

All opinions are welcome

For myself, I find the @gaaned92 releases to be so stable and up to date that I find little need for a rush to a 5.9 release.

However, what about all those potential new RT users who would greatly appreciate having Local Adjustments. I’m talking about those that just want to go and download from the main RT page a currently available version that has LA. What about existing users that prefer not to mess with dev releases. I would imagine that many have watched Andy’s recent videos. So, I can understand Andy’s frustration when he has to explain why it’s not possible to go to the RT site and get a feature like LA at this time.

If the goal is to increase the RT user base then I think it is important to do releases in a more timely fashion when a major feature like LA is introduced. I know that it’s important to have stable releases and it’s all being done by great people willing to put the time and effort into it. I think that we have that now!

Hopefully it will all come together sooner rather than later.

This message is just to let all of you know that the automated Win64 builds are back in production, and I am myself hopefully back into the business of maintaining them!

Thanks to @Morgan_Hardwood who tried hard to fix my ugly bash scripts. He actually almost got them working again (and he successfully managed to restore the AppImage builds by the way), and now with a final fix the automated builds are available again.

I’m on macOS and compiling and running RawTherapee is hard[…]
Any help to make that happen is much appreciated.

what can I do to help?

Now if someone could make a video of this it would be brilliant. I think it would be a lot easier to understand and follow in a video screen capture than in any written article.