Do you want a straight out of camera JPEG style in darktable? Here we help each other 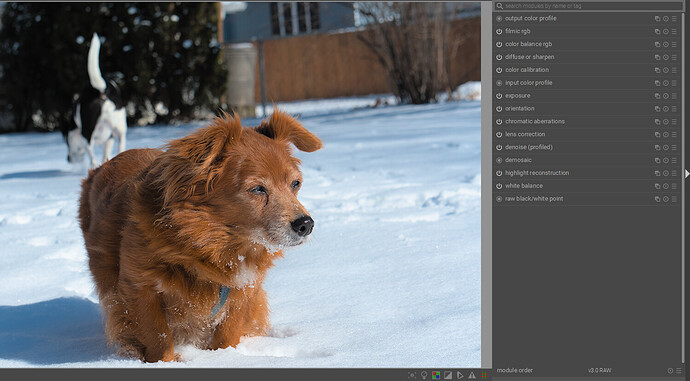 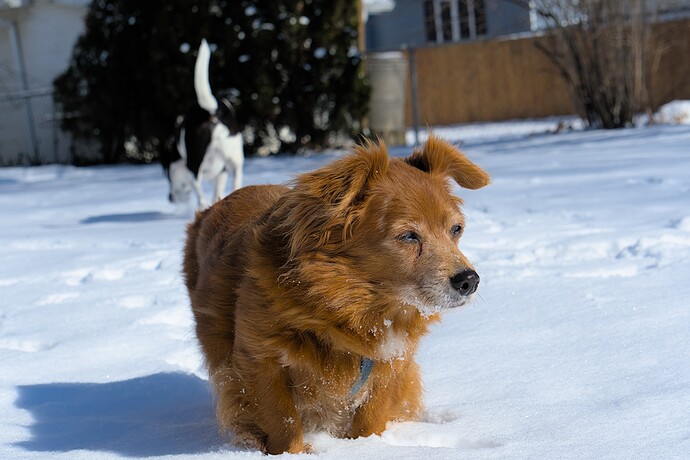 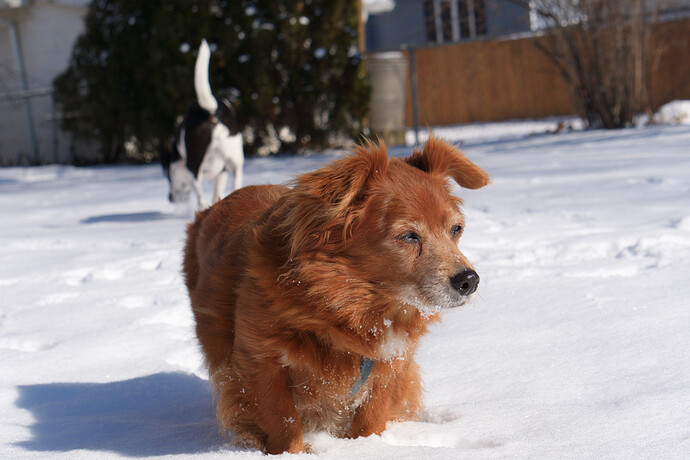 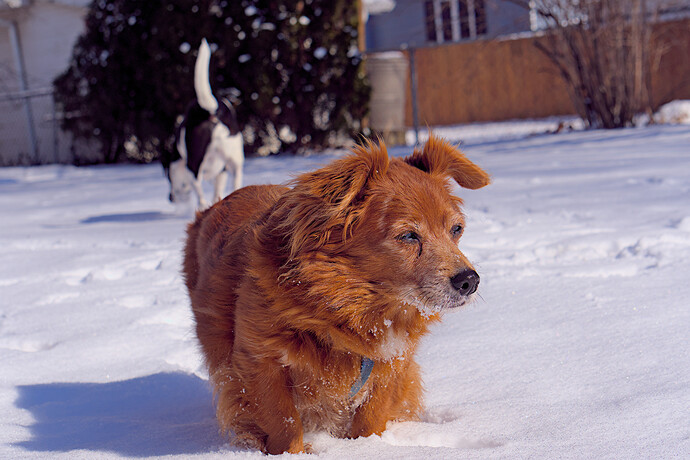 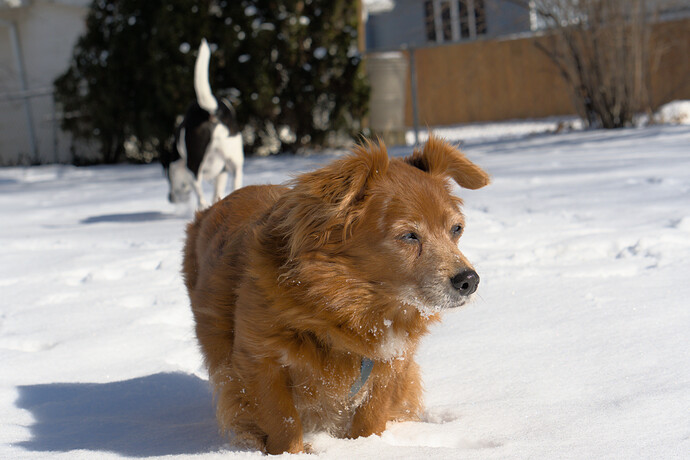 dt3.9 with filmic v6 and a velvia50 look curve by t3mujinpack - film emulation presets for Darktable (brings out the reddish brown) 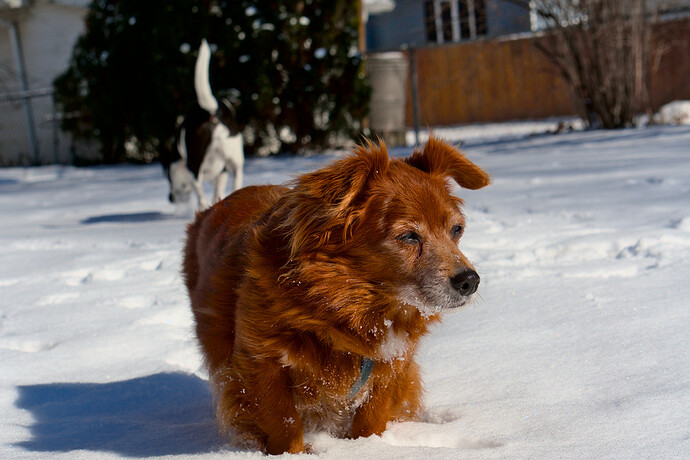 I think this is a brilliant edit. 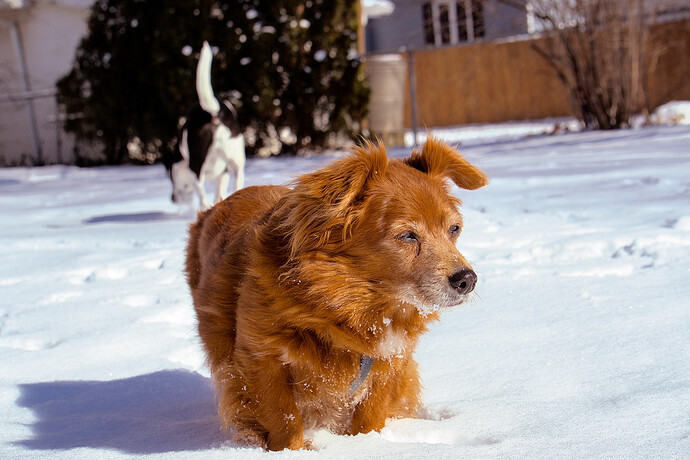 Thanks to @priort, @age, @pass712, @dirksagwitz, @Jose_Figueres or providing samples. I think @pass712 is the winner.

Throwing my hat into the ring, I managed to get something not too crazy It ended up being kind of close to @pass712:

My edit vs. the SOOC JPEG snapshot: 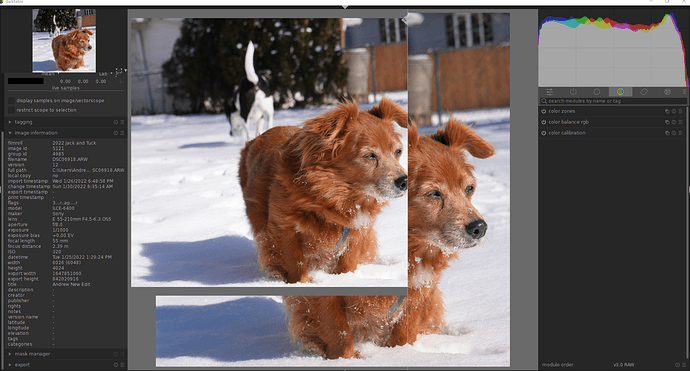 The goal of this topic was to spend less time doing corrective. I didn’t mess around with fimic RGB to see if I could get the same appearance without having to rely on the tone equalizer. Having to rely on color zones was disappointing. But could you make a style out of this edit so that it’s used on every import?

I’ve been reading up on some other topics and was able to make an ICC import profile for my camera. However, as I was typing this, I tested the import profile on several other images and realized parts of the snow and the background dog’s fur have a yellow / orange cast. I don’t think I have clipping. So this wasn’t completely successful, either.

After changing the import profile to the ICC, it now takes very little to come close to the SOOC JPG:

I assume it’s pointless to share the XMP since you’d need my ICC to see it “correctly”. But here’s a screen shot to compare. His fur isn’t exactly the right hue and I’d like the gray whiskers on his face to stand out more, but it’s pretty darn close. But the orange snow / fur is wrong. 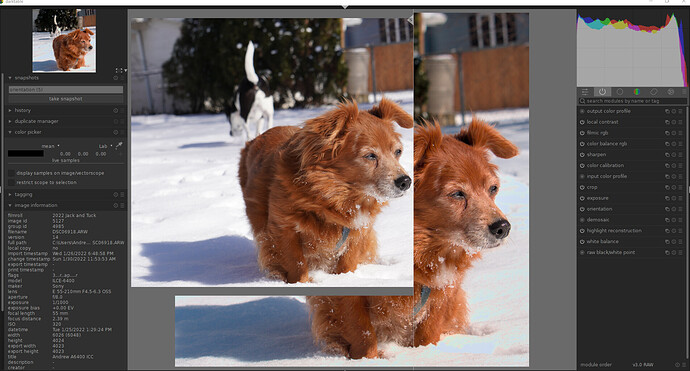 Any ideas why it’s turning some of my whites orange? Are there drawbacks to using a camera-specific ICC? I realize I didn’t have control of the shooting conditions of someone else’s sample and they’ve only licensed the image for personal use. Any technical flaws with the above conversion process?

Any ideas why it’s turning some of my whites orange?

Could you try to move the exposure module right after input profile?

@akgt94 I suspect the color is off because of the way you created the icc. As you noted you just grabbed an image taken under studio lighting I would guess. Then you chose to convert that raw to DNG and then generate a DCP via your process (normally you would use a tiff in the xrite for and icc). The DCP files which are dual illuminant normally require two images but you have used one that maybe at any color temp and then your conversion subsequently to an icc which even if you did specify which illuminant during this I am sure that it would be easy in the end to not be using the correct white balance or could introduce some sort of hue shifts…

As you noted you just grabbed an image taken under studio lighting I would guess.

I shoot my target shots for profile creation illuminated by daylight. If your target shot profile was made with a StdA (tungsten) light, save it; you’ll want to use it for images that were similarly lighted. That’s the benefit of dual-illuminant DCP profiles, they provide all that information in one file.

Now, you should be able to whitebalance-out the orange cast, if it is really due to color temperature of the scene’s illumination… ??

Ya for sure. Unless I made some assumptions …the OP grabbed the test shot image from Imaging resources for their camera under those lighting conditions. Then took Adobe DNG converter and converted it and then ran it through xrite to create a DCP and then converted that with dcp2icc…so just a lot of assumptions and conversions there…I think he would have just been better served to take the DCP strait from the DNG convertor and try that via dcp2icc or make a linear tiff of that raw and do the normal creation of an icc file… Actually I took the raw in to DT and just used AP’s colorchecker adjustment in CC module and the delta E could be reduced to 1.4 ish…so just making a style with the exposure setting suggested by that process and the CC settings gives pretty decent color in my opinion…so no ICC or DCP messing around …just CC corrections to the WB and standard input profile…

SOOC JPEG, the camera manufacturer is using their best algorithms to perform the format conversion. The manufacturer has prior knowledge of the hardware and has R&D resources to tune these algorithms.

Not sure the DT pipeline. As I read it, the input profile is generic. So OOTB defaults are not tuned to a specific sensor. So that’s where RAW to JPG matching starts to fall off of the rails??? “standard color matrix” input profile vs. a camera-specific hue/tone/saturation/exposure/etc. profile is going to give different results before you start the edit.

Imaging-Resource is the only place where I’ve found RAW samples of industry-standard color charts. So that’s where I started.

Maybe make the icc file directly without all those conversions

Not sure how. I think I worked the problem forwards and backwards. X-Rite made the card and the software. They require DNG input and provide DCP output. Going from an ARW input to ICC output, I came up with a workflow that got a result. I’d love to see an alternate workflow that can go from an ARW of an X-Rite card directly to an ICC profile. If you have a workflow to get an ICC from an ARW, I’m happy to try. Winders, mind you (though I can use WSL).

I’ve been able to borrow ICC profiles off of Capture One Express. In DT, they look way crummy (severely under-exposed).

Raw Therapee has DCP profiles from some cameras. I haven’t tried converting a similar DCP (Sony A6300?) to ICC. That is kind of my last stone I haven’t looked under.

So some issues there…

1 you can also get test shots from DP review…its a bit bigger color chart so I use that when I experiment . Studio shot comparison: Digital Photography Review

2 Any version I have seen of the xrite software takes a tiff and will create an ICC file…at least newer versions. To make that tiff you create a pass through TIFF file in DT no processing and all profiles set to linear rec2020. Save it as 16 bit uncompressed You can also use this tiff for Argyll and Dcamprof to create profiles with their software…

4 I believe the values for the input profiles for many cameras in DT are taken from the Adobe DNG matrices…this would have to be confirmed. darktable 3.8 user manual - color calibration

6 You should try to use the built in colorchecker correction in color calibration . It works quite well. Essentially you create a set of channel mixer coefficients that tweak the WB/input profiles based on a colorchecker and then in the same lighting with the same profiles you can use this to correct lmages in similar lighting conditons…

7 The two color matching methods that I am aware of are this one…which I have run on WSL GitHub - pmjdebruijn/colormatch: ColorMatch and also using the raw jpg pair in darktable chart to create a lut …it does a pretty good job.

Matching a raw to color chart does not ensure that it will match your jpg any better it just means the colors will be more accurate. In fact the jpg may have a lot of processing applied that will take it away from what you get with a colorchart.

Using the set image from here

Expert news, reviews and videos of the latest digital cameras, lenses, accessories, and phones. Get answers to your questions in our photography forums.

I made an icc just for fun to see how it compared as a starting point for your image… I liked the color that it resulted in?? 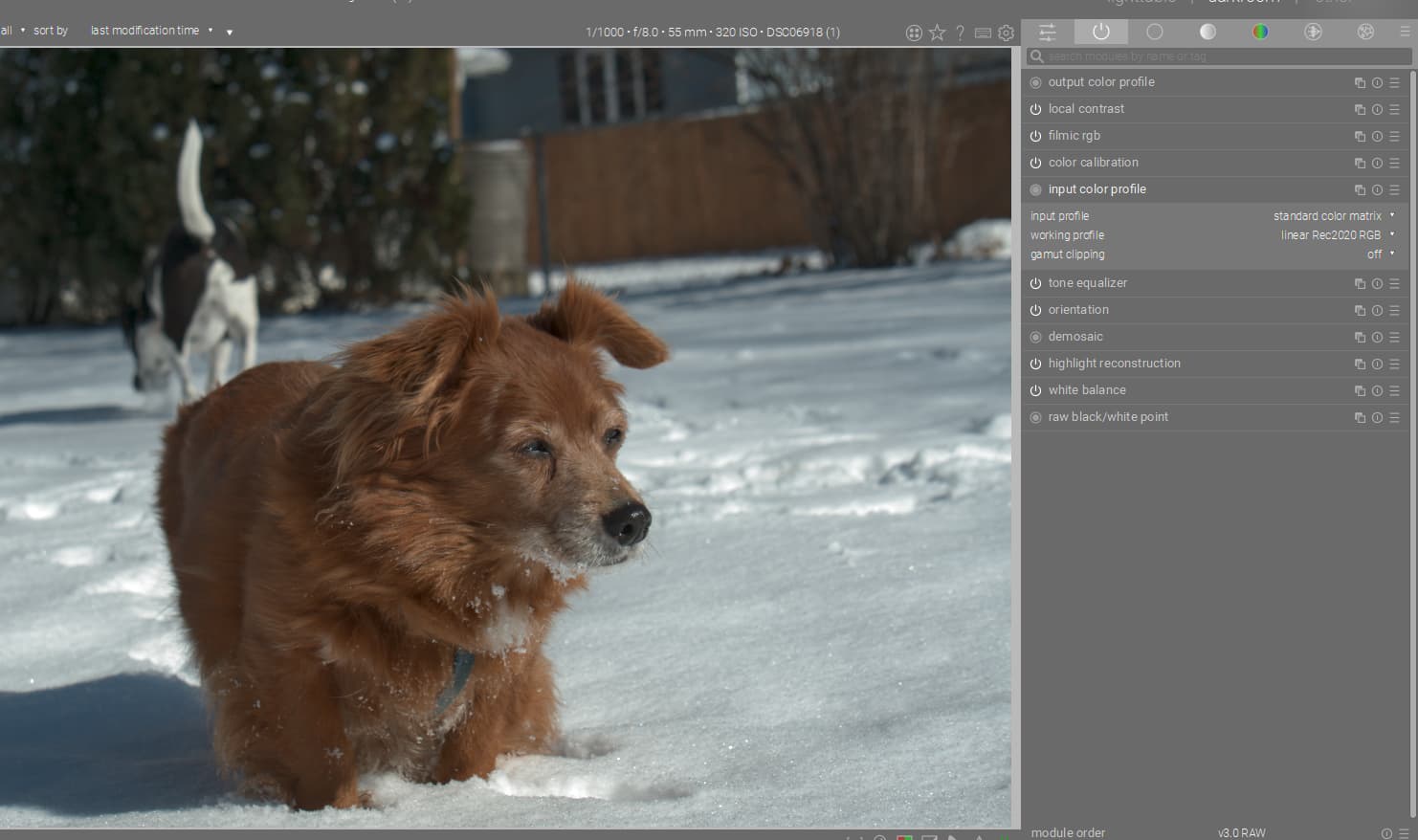 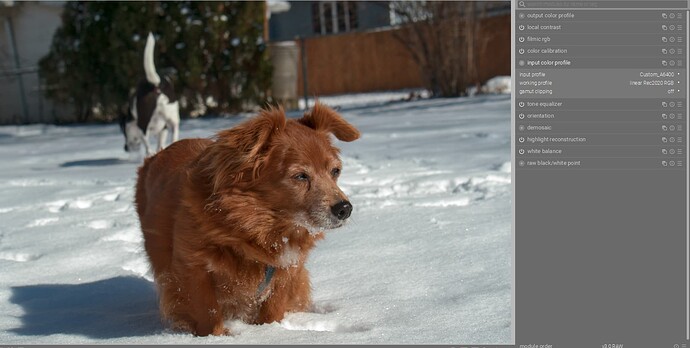 I did actually make a second one with a tweaked tone curve …I notice that the default icc produced grey values very close to published values but the out of camera jpg was lower 222 vs 240 ish for the white patch and 40 vs 50 for the dark patch so black was darker and white was less bright…I tweaked the tone curve in the profile to mimic this…it might be a better starting point for brighter images or washed out ones??

Seriously, every one I’ve made was pretty good, eyeballing it; yours works quite nicely. I wouldn’t put anything but a linear tone curve in one, however; I prefer to start linear, but that’s not the topic of the thread…

I suspect the color is off because of the way you created the icc.

vs. my previous edit, this tweak to the white balance handling ends up very close to SOOC JPEG for tone, hue, and saturation. Filmic (?) crushes the details in the snow and the white whiskers on his face don’t stand out as much. But this is getting very close to a JPEG-matching recipe. 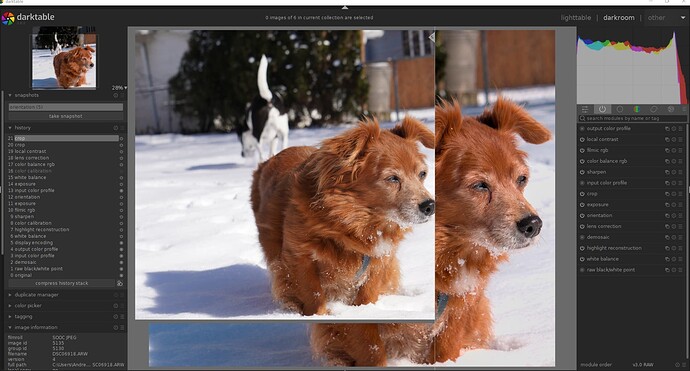 The xrite version I installed needs a DNG input and only gives DCC output. I had to fill in the blanks.

Many thanks. The Adobe DNG Converter’s DCP are hard to find in Windows, but I made ICC from them. Using DT “modern” white balance handling, the snow has a color cast in all of them. Turning off Color Calibration and changing White Balance to as-shot gets rid of it. Adobe Camera Standard and Adobe Camera Neutral get kind of close to SOOC JPEG, but not as close in hue and saturation as the ICC I originally made. Also, as convoluted as my ICC process was, it ended up being the closest match in tone, hue, and saturation to the JPEG (i.e. without requiring image-specific corrections). 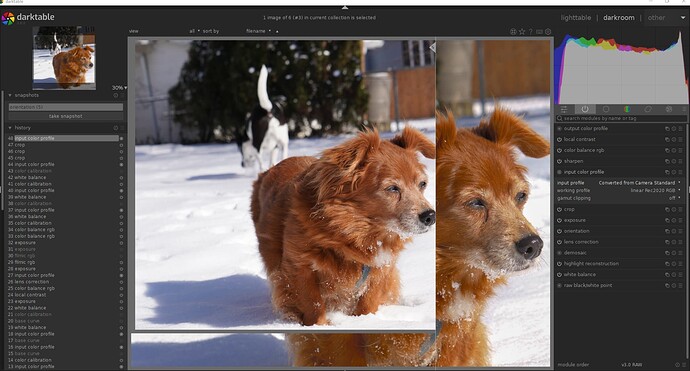 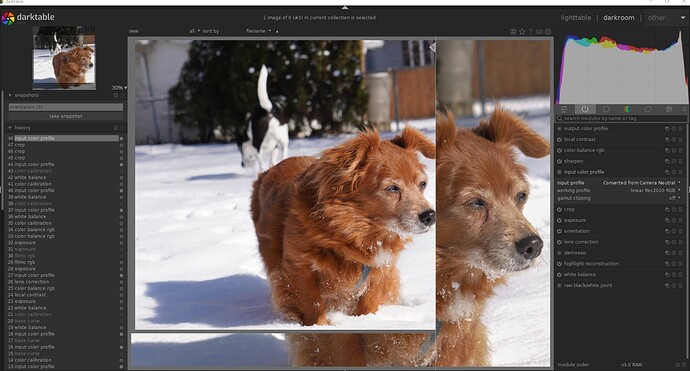 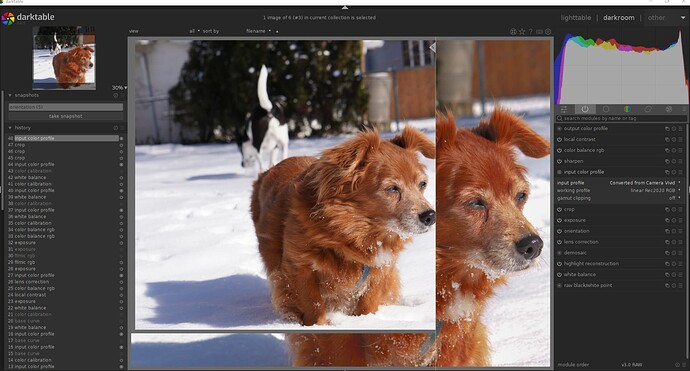 Raw Therapee also installs with DCP. They don’t have the A6400, but I tried the A6300. Kind of in the same ball-park as the Adobe ones. 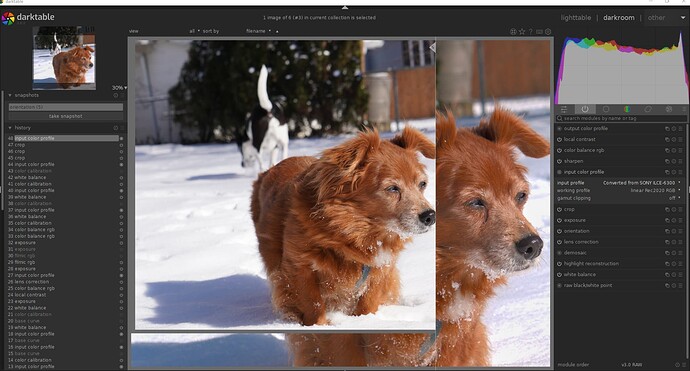 I mostly shoot JPEG only, but I do have some JPEG+RAW. I’ll try some other samples with this method.