I’ve just returned from a short vacation to Japan, where among others I got to visit the famous “Snow Monkeys”. I call this one: “Here’s my better side Mr. Photographer” 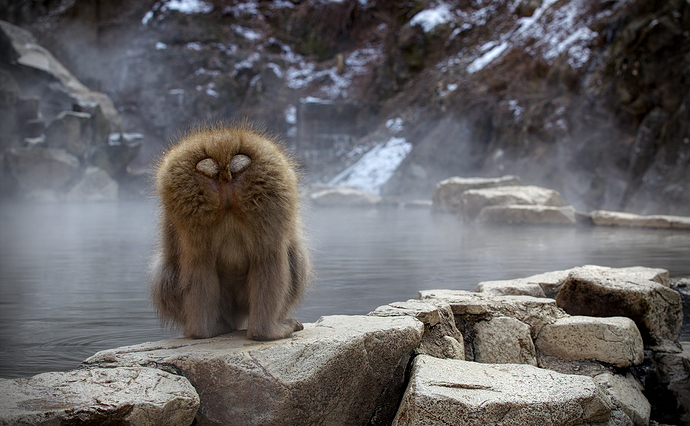 I’m looking at this on my phone, and this two white spots totally look like eyes, below that the nose, and the mouth… Oh wait.

My try in darktable: 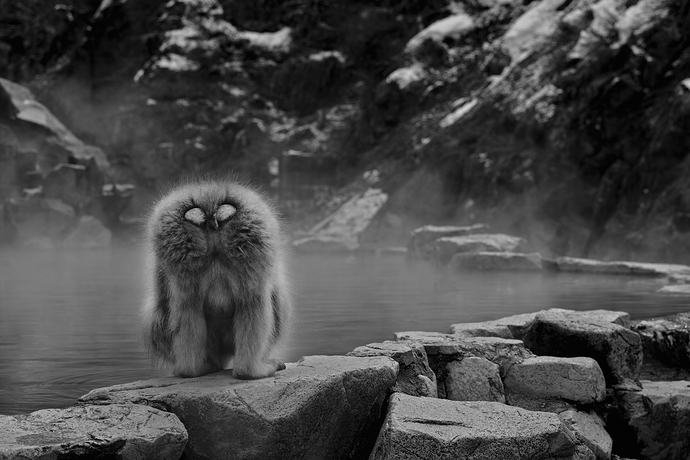 I’m looking at this on my phone, and this two white spots totally look like eyes, below that the nose, and the mouth… Oh wait.

It is a real life Gossamer. Thanks for sharing @jinxos.

Ya talking to me? I ain’t hear nothin’ man. My ears are on the other side. 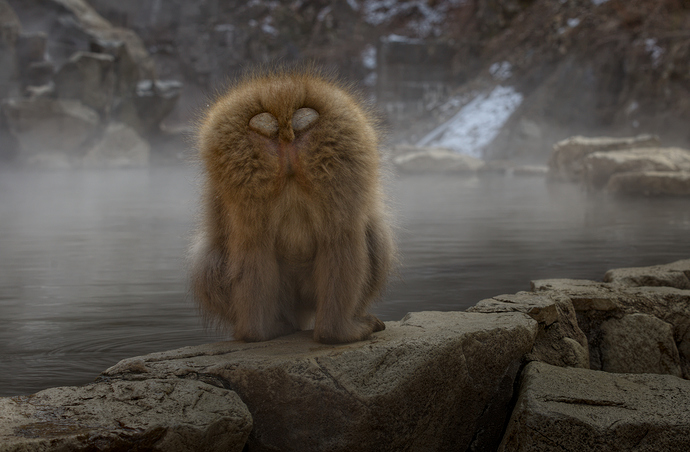 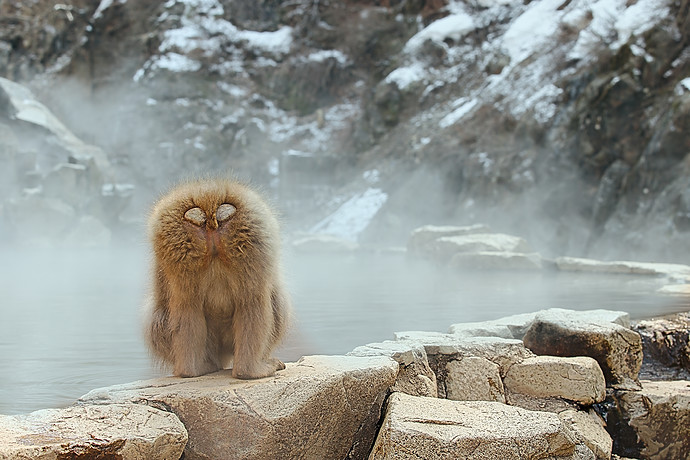 I think the contrasty background is the main challenge in this photo. 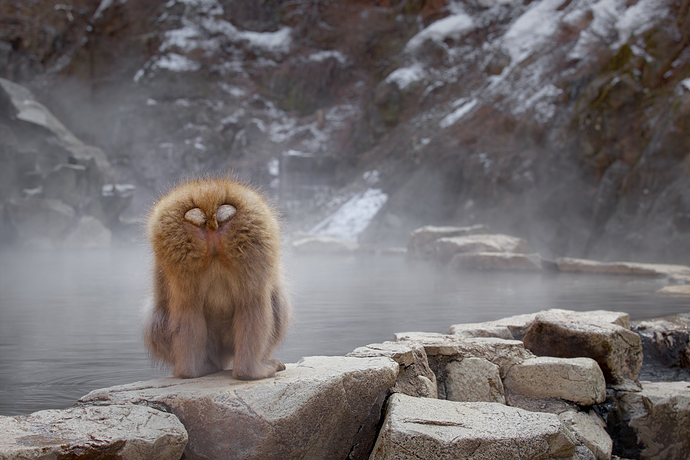 Well, it was either that or a wall of photographers/tourists.

Sorry I didn’t mean to criticise your capture. You have done nothing wrong and this is an interesting photo indeed. I meant the main challenge in “post processing” was to handle the background to make it less distracting.

Don’t worry, I didn’t see your comment as such. The background and the steam are indeed the main challenges here.

A possible caption could be "Bottoms up! 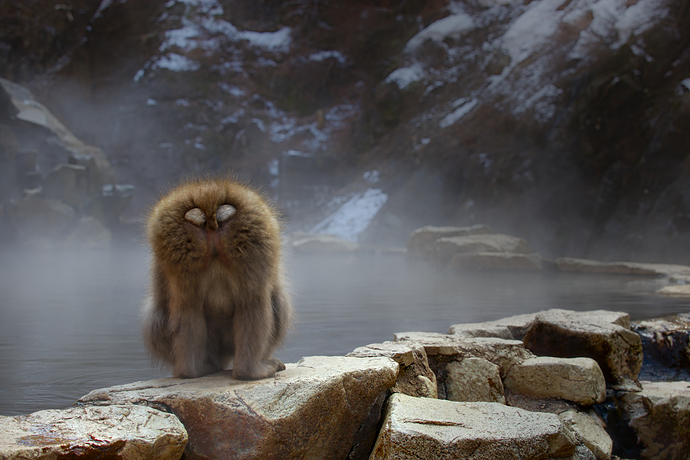 I love this game!! My first participation! I tried to bring up the monkey against the background, where it is my xmp!! 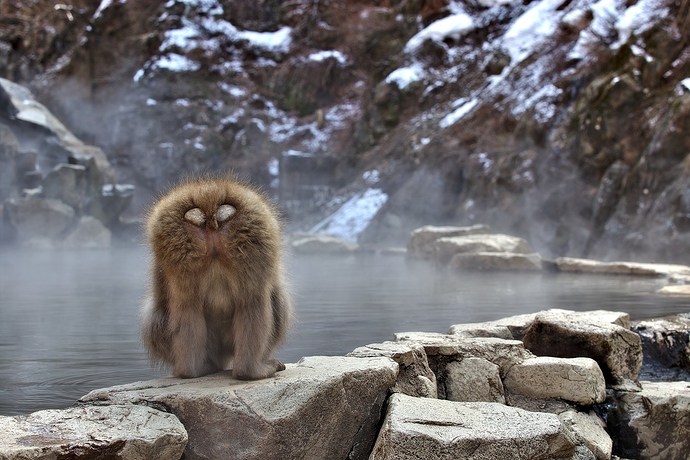 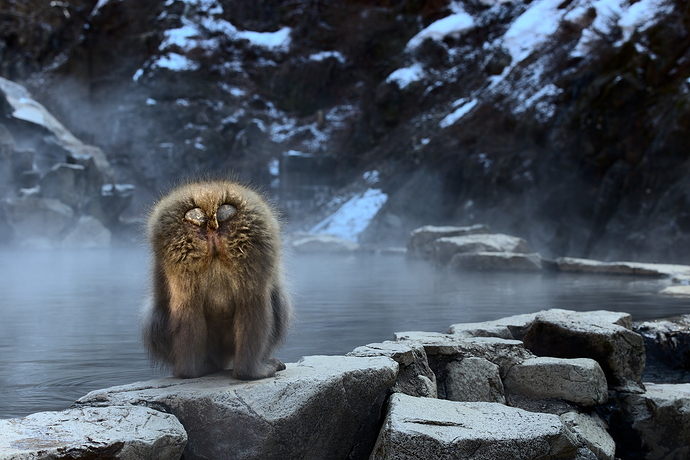 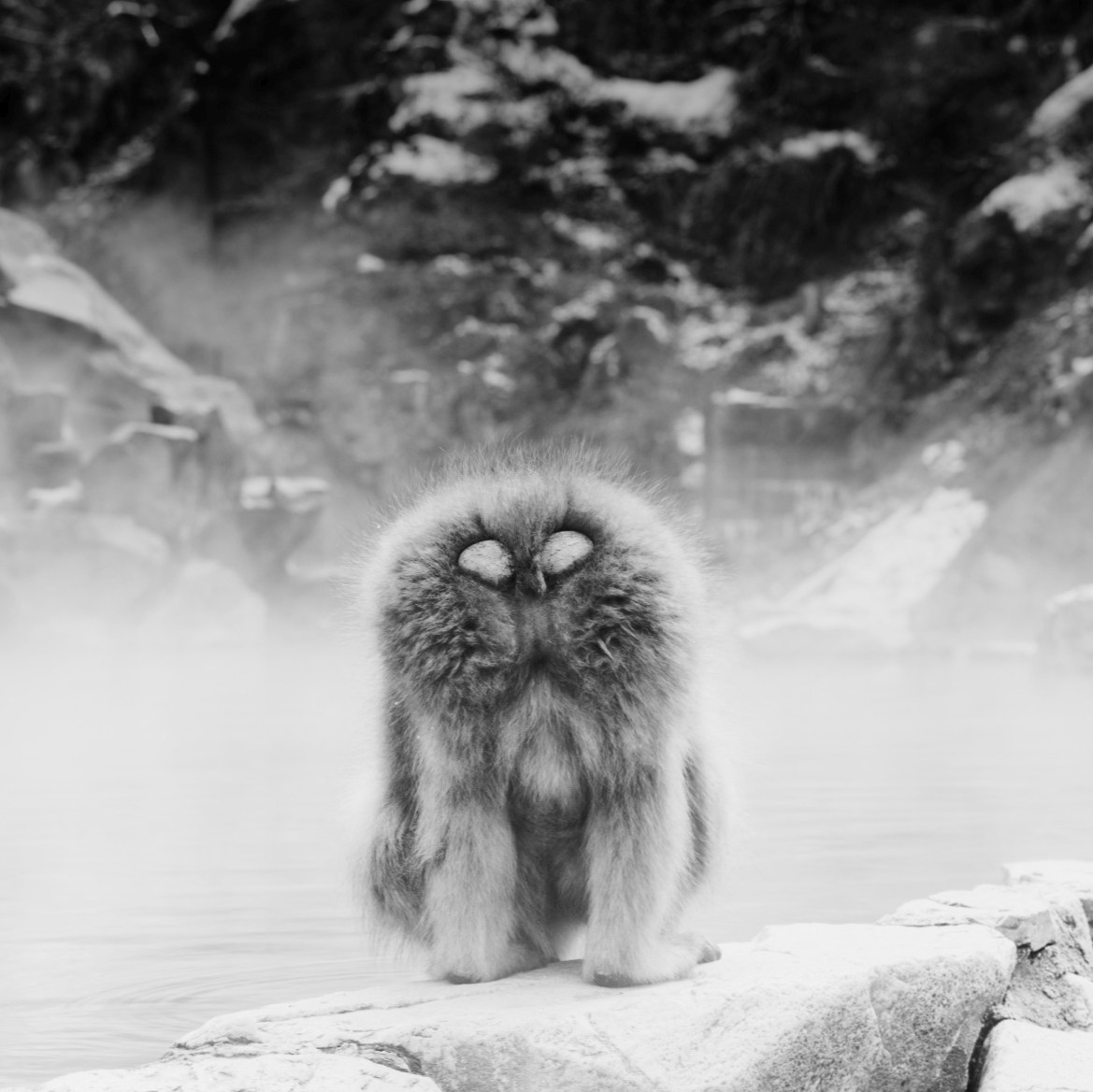 Thanks @jinxos for letting us play with the face of our ancestor; so many nice variations everybody!!

For the occasion I chose to test a 32b workflow with newest Phofofloss. So I developed a starter point in PhF and then into gimp for g’mic’s massage hands, LCE and DRI with a child drawn mask, ‘cause the BG didn’t need touching, me like touching, touching statues in the museum, anyway, back to PhF to make vanilla fog lite, thanks god at least my last preset still works, everything else (older stuff) doesn’t {angry face with huge head veins ready to blow or maybe start laughing}. So achieved desired smooth HL stuff and back into gmic hands… I feel such a prostitute… and for free, je je eje. This time was a homy LUT, an ever so slightly bit of sharpening and grain a tutti pleni, ah and still went back for a vignette (curves blended in multiply mode, filtered through blurred mask, aliens give back brain). Export, resize with IMs, their downscale is badass good and nail it to the livingroom’s wall… so I can uninterruptedly envy forever those ass’ cushions 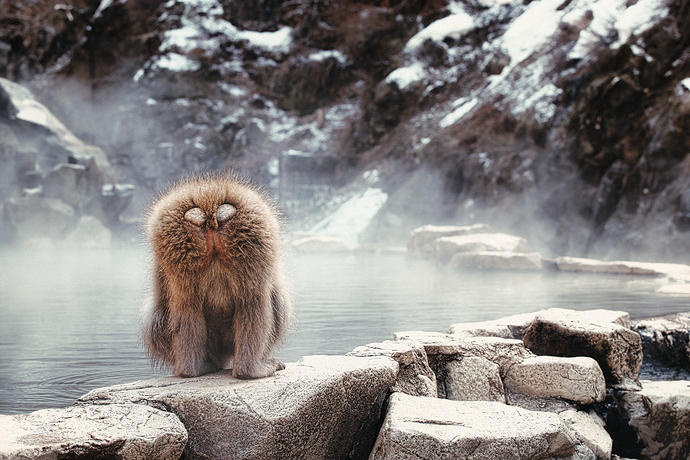 many screengrabs during process to assess the crooking =)

@chroma_ghost Nice butt hairs. The boulders could be less coarse. Wouldn’t want to sit on them. 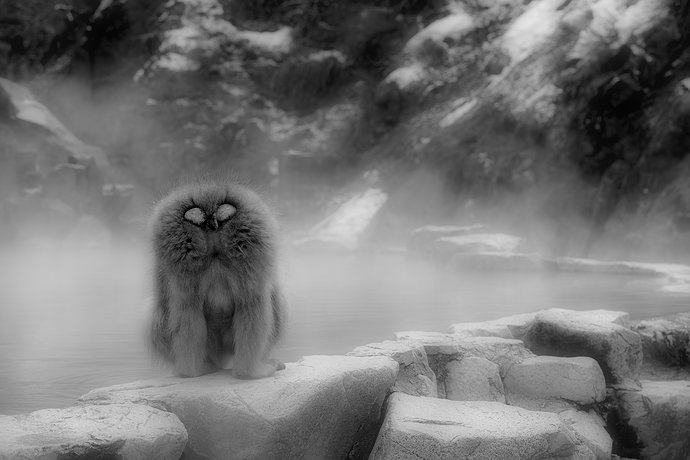 @mikew Welcome to the forum. I hope you enjoy your stay. The PlayRaws were what one of the things that attracted me to join instead of just lurking. Part of it is sharing what your workflow was to achieve your result so that we may learn from one another

@afre - thanks for the comment, I’ll certainly try to expand.

Two things I thought I wanted to do with the picture, inspired by the sometimes “mystical” aura suggested by Japan in general, and also the fact I can sort of see a “witchdoctor” in the monkey’s rear end. So I wanted to make the monkey “pop” a little and then try to both emphasise the mist rising from the pool and use that to detract from the background… I thought black and white best suited what I was trying to achieve

Gave me a chance to start learning darktable and use some masks. Overall my workflow was very much on the hoof, and could certainly be refined.

I started by boosting the exposure in all three channels using the histogram and white balance. Overall I’m roughly 1.4EV up on the original. Channel mixer user to convert to monochrome, with bias to the green channel. Shortened L using a tone curve (flattened at the top) (Still learning what these things do, let alone what they mean, so really just playing until it looked right for me!)

Used a gradient mask to then reduce the exposure in the background, with a slight boost to black point.

Then a rotated gradient mask following the line of the stones in the foreground where the exposure, blackpoint and opacity of the mask are reduced.

Quite a tight drawn mask around the monkey itself, blurred significantly and reduced opacity. Increased the blackpoint a little.

Using the soften mode, reversed the existing monkey mask, and softened the remainder of the image (excluding the monkey), hopefully making the monkey stand out a little, and yet give the image a little “mystical” glow.

Finally a small amount of sharpening.

Not sure if I did all the steps in any kind of “correct” order, or indeed if any cancel each other out, but that’s learning. Good to use someone else’s image and see what you can do with it. So thanks to @jinxos for the opportunity.

Apologies if above is a bit of a ramble!

@mikew thanks for the reply! I like your take. We strongly encourage people to upload their sidecar file, which for darktable would be the xmp file in the same folder as the raw