Missing more portraits - with some, but not so many Pat’s beatuful women here-, I’m providing a grumpy old man from the hills, interrupted when shaving. My two b&w versions went the dt - gimp - pat beautify - dt way and are using dt watermark module for some temporary reasons and out of curiosity and possible fancyness. Published by the author, under the CC BY-SA licence. 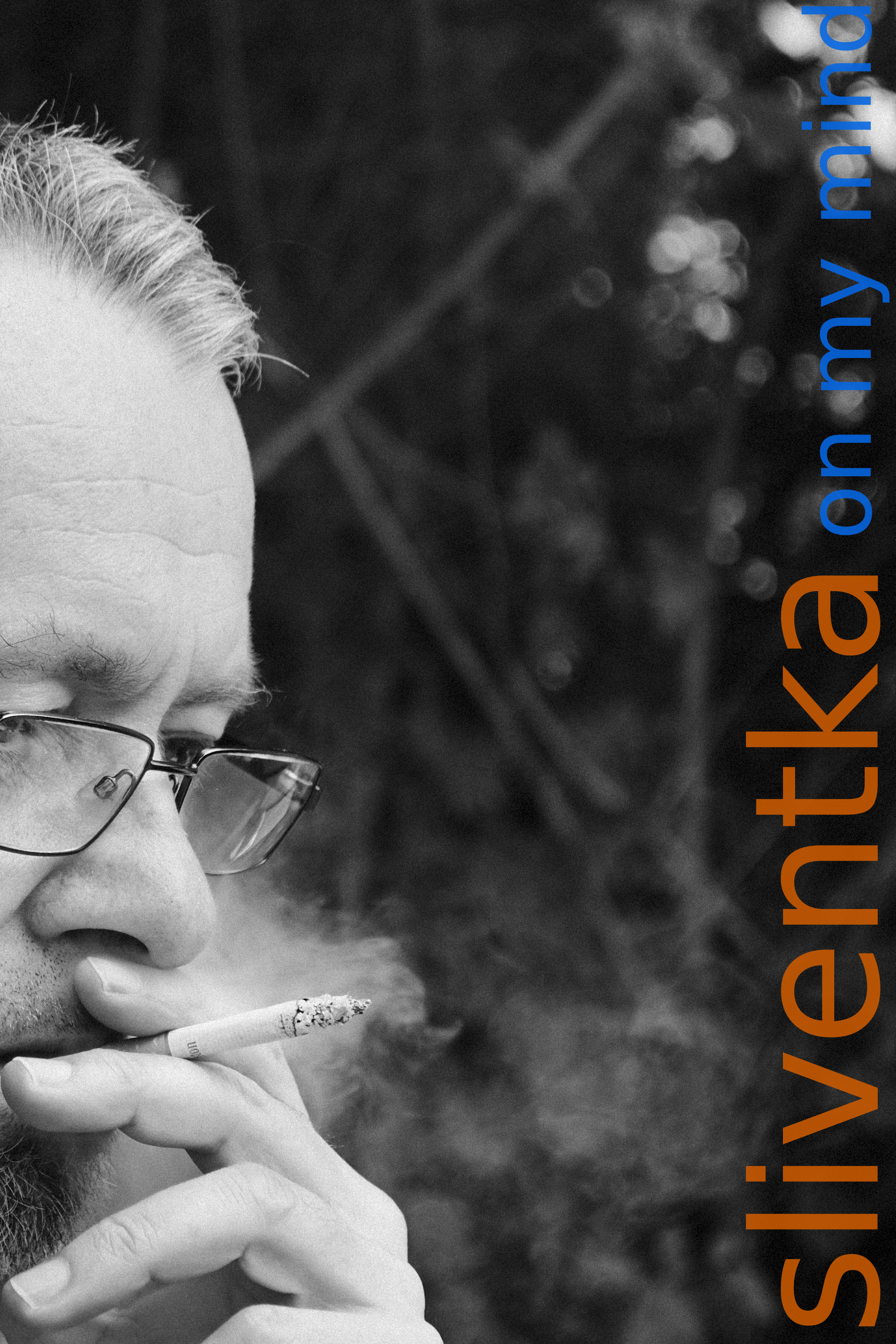 I used Partha’s GIMP Std. 2.9.6.
Thought background was too `busy’ and not coherent with the mood. So just used multiply blend mode to remove it. It also made the portrait a bit brooding. 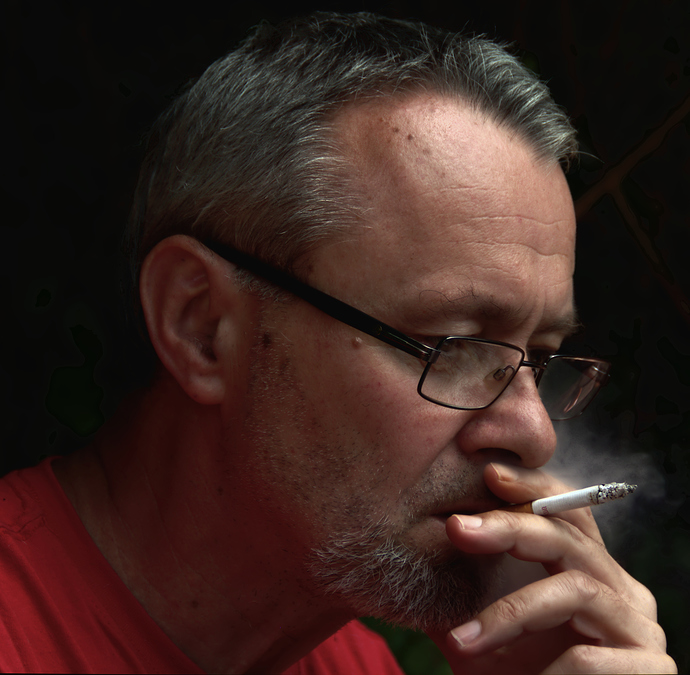 Made him look a little older. DT only. 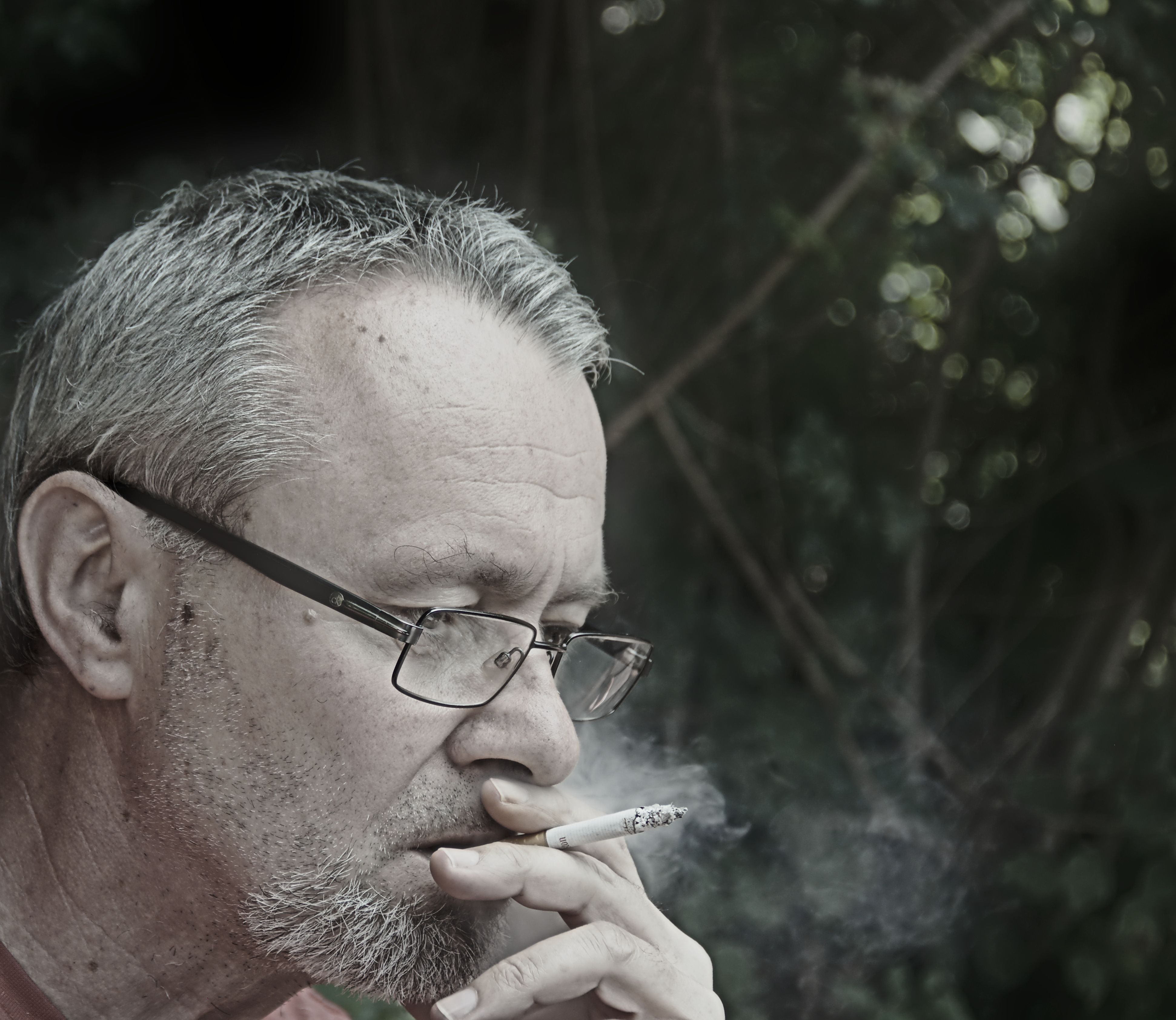 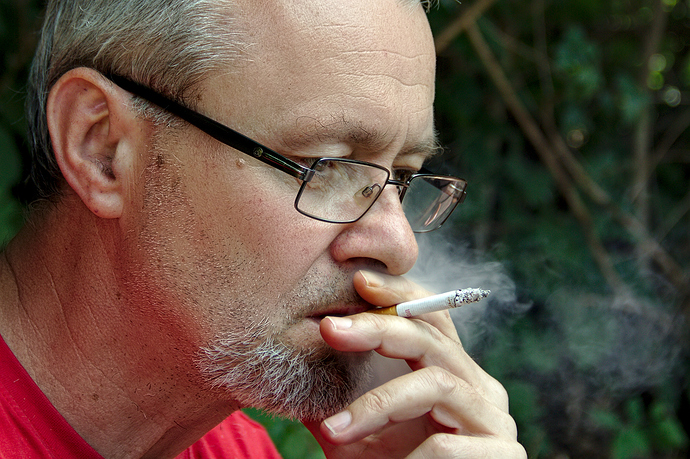 @shreedhar Nice take! “You have been warned” but capitalism! politics! weed!

Interesting, I didn’t think of trying this way. Fine!

About health: I am financing a transatlantic military organisation, that likes playing with tanks on the very Russian border. Life is dangerous, and doesn’t end all that well. Just a “thought”.

Made him look a little older.

Even some ladies tolerate this, but check before you do it! 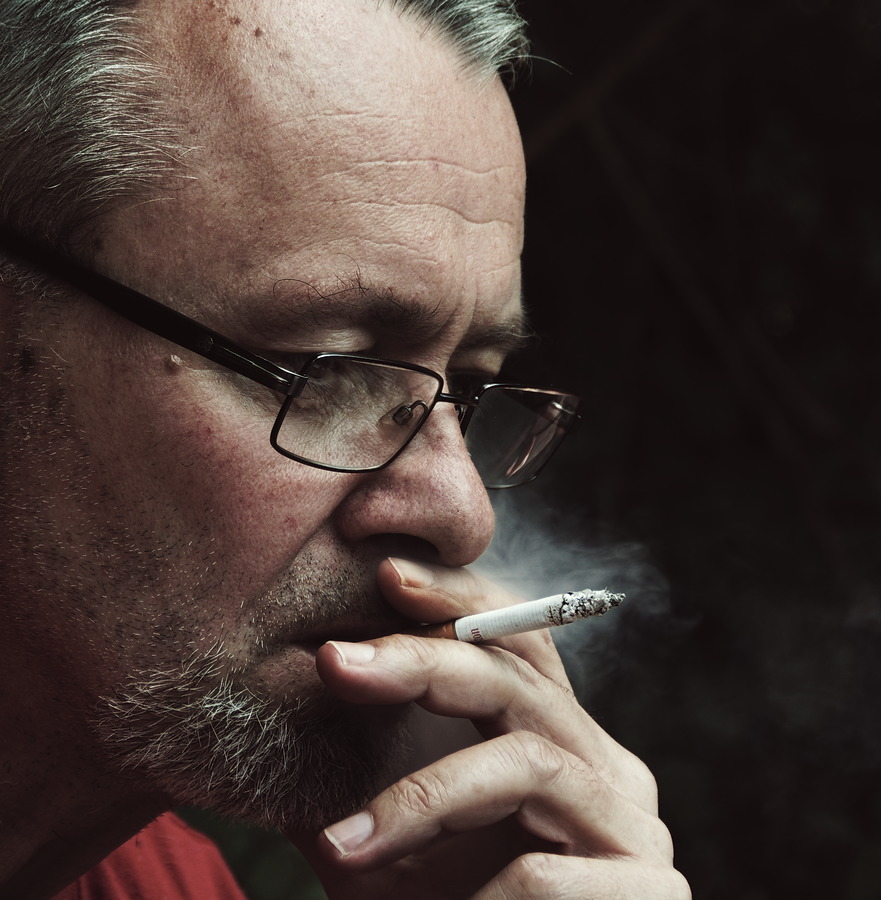 I like how you have used the equalizer, I’m still taming that thing, that is not for (small) children.

The downsized forum image looks oversharpened to me, the bigger version not so much. Be well!

How did you use multiply blend to remove the background? Could you give me some pointer?

I’ve been searching about it but I only have found its usage to remove white pixels in blended images/masks (for example: to put a logo in a background).

Another dark version, I like it. By the way, is it possible that the attached pp3 file isn’t the right one? I thought it was a version compatibility problem, but it also doesn’t work with an older Partha’s portable version for Win that I still have. (Cropping is set to false, for instance.)
Anyway, don’t loose your time, perhaps I have messed something up, and the picture is fine!

Hi @Jacal glad you like my attempt, I enjoyed playing with it.

Well I really don’t know what happened, but you’re right it doesn’t match the one I have on disk here

Here it is again, the only other thing is that I have applied a dcp available from here https://rawstudio.org/blog/?p=798 and the result looks completely different without it because I have applied the embedded tone curve.

Edit, and as near as damn it with RT’s camera standard colour input profile
jacal_portrait_dcc_0013.cr2.pp3 (11.0 KB)

How did you use multiply blend to remove the background? Could you give me some pointer?

I made two copies of the original layer, changed the top most layer style to multiply (instead of usual normal) and then merged it down to the middle layer. Now I have the original and the darker version. The colors became too red for the dark layer, so I used Hue Saturation module from the Color tab to adjust to taste. I remember reducing saturation of red and increasing its lightness. Basically, after this operation, you just wing it the way you want it.
I use this technique of duplicating twice and changing the blend mode often in GIMP (usually with layer masks and gradient tool) to darken /lighten certain parts without artifacts. Saw Joel Tjintjlejaar use it for his BW art photography.
Hope this helps.

Thank you, @james, it works now. I like your brave tone curves. I also remember those dcp profiles, even found them on my disk. (I wasn’t using them “for a while now”, which means “like 3 years” (*).) Have a nice day!

Here is my take in darktable 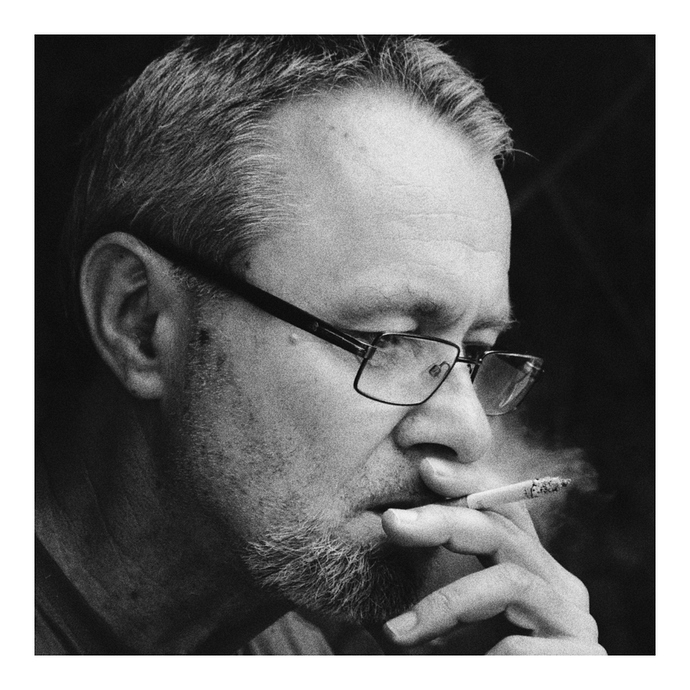 Nice shot! Thanks for sharing

Thanks, multiple interpretations go into the very-dark-background directions. Probably the boring me didn’t think of this, since it was shot in the middle of a sunny day, in the shadow, though. The guy is also good for rough details and such.

By the way, this has been obviously fixed before I noticed, in the past the forum used to delete the editing metadata from the darktable files, but this one works, used as a “sidecar file”.

@Jacal Thanks for the raw portrait and everybody showing their interesting versions, like @james rawness =)

Gonna try an limit the BS leaving my mouth, not so much 'cause I think you (anybody reading) are unworthy but 'cause the bread is almost leavened and ready to the oven, which is cho kute that when turned on, makes the fuses jump… so yes fiber optic net speed and an electric oven who thinks it’s a fusion reactor.

When I saw the image inmediately came to my mind ummmhh… not a nice portrait, meaning neither good nor bad, personally I like extremes makes decisions easier, I’m lazy. Then I though people (we) should enter nicer images to the playraws… there’s going to be a dude that’s not me looking at this for some time… also need alligators and naked people. Then I went on in a absolutely ignominious free fall of concatenated shitty thoughts about totally random stuff, almost forgot to breath. Time passed and despite I surely have better (in the sense of “urgent”) things to do, or maybe exactly 'cause of that, I completely changed my mind and decided this was a challenge… not one that so much needed reaching somewhere, but of relating to the image.

I must say, it is easier to change our minds… not easier but a lot more fun, 'cause the moment I started looking with new eyes to the image was just lean learning to jump potatoes (!!!).

The first thing I noticed was the “triangle”; his head dead center, the blood coming from the bottom, light on the right and darker on the left. – I wish I had the time to go on about how many films and characters, even stories, books and philosophical theories; associations, thoughts, etc. went on through my head, a storm a true brainstorm =) 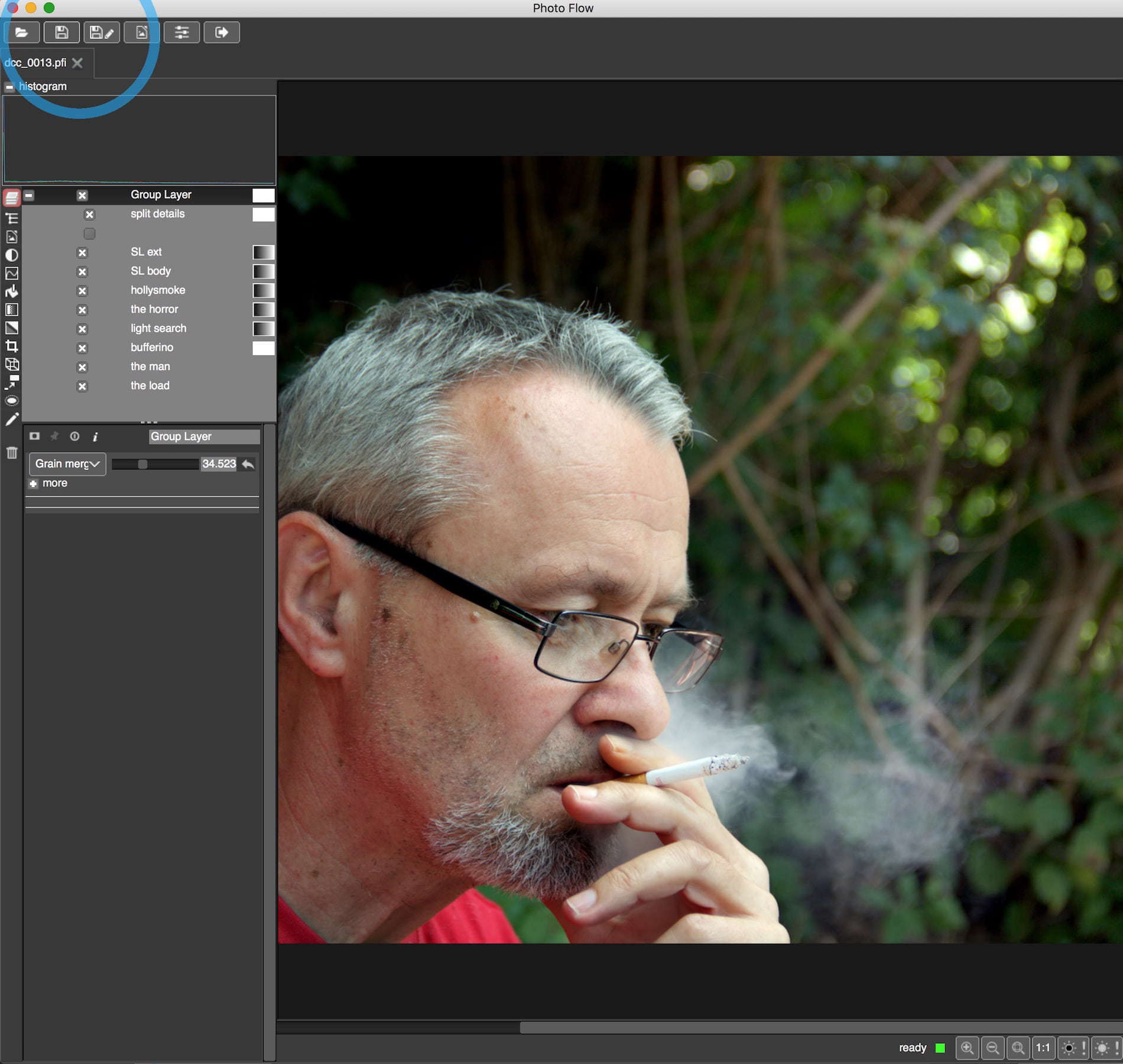 In PhF I made those areas’ qualities more pronounced - two worlds collide - darkening the left side and brightening (also a bit of contrast) on the right, with heavy use of different (types of) luma masks and patching the holes with path masks. Some more masking to preserve light on him and to help in parts where areas mix. Red and green should never be seen without another colour in between. I knew I would tame the red, but what could I use to balance those two very strong hues? As a first step I make the smoke more present by increasing luminosity and contrast, as smoke is whitish and also connects center with right side and to me kind of represented his spirit (do you have any tobacco?), then thought of overlaying a layer with a purplish blue, a between green’s and red’s triad mixed tone… left that for the second part (never happened as such), before leaving PhF I still applied a sort of tonemapping with split details. So got here, not too bad 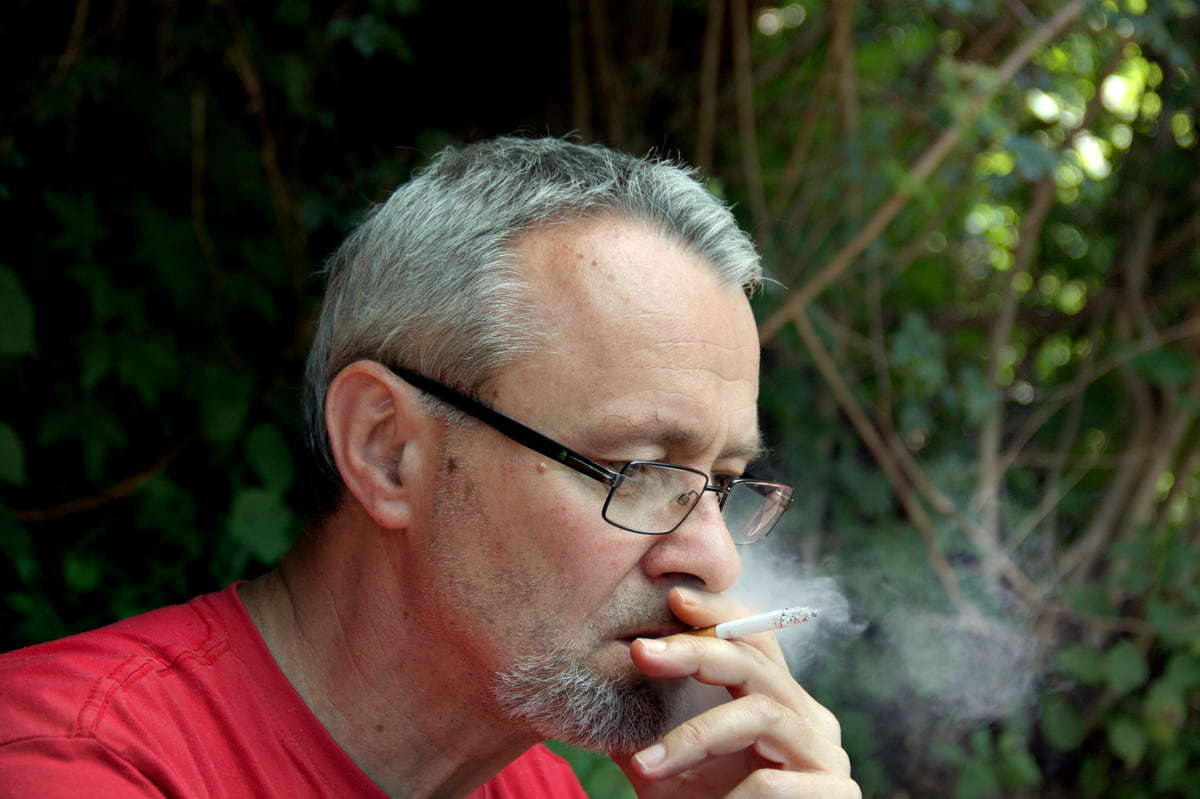 Went through some LUTs to see if I could find something soothing my in between red and green idea… Looking at them I had very clear I didn’t want to bring back light to the dark BG, that green needed to remain green and not blue, that hot t-shirt would benefit lower saturation (or maybe just less light) and shifting to a warmer (blood) tone. It was here when I abandoned the triad-mix idea and decided to give BACK POWER TO THE MAN, that if done well enough, the already nice palette would stand by itself… this is not a great portrait, how long are people going to look at it? and that sort of dough clogging the only eye of the soul

So, off I went to mix the homemade LUT in the center (SELEN for personal ref), and the one in the left, from a very well establish grading house. 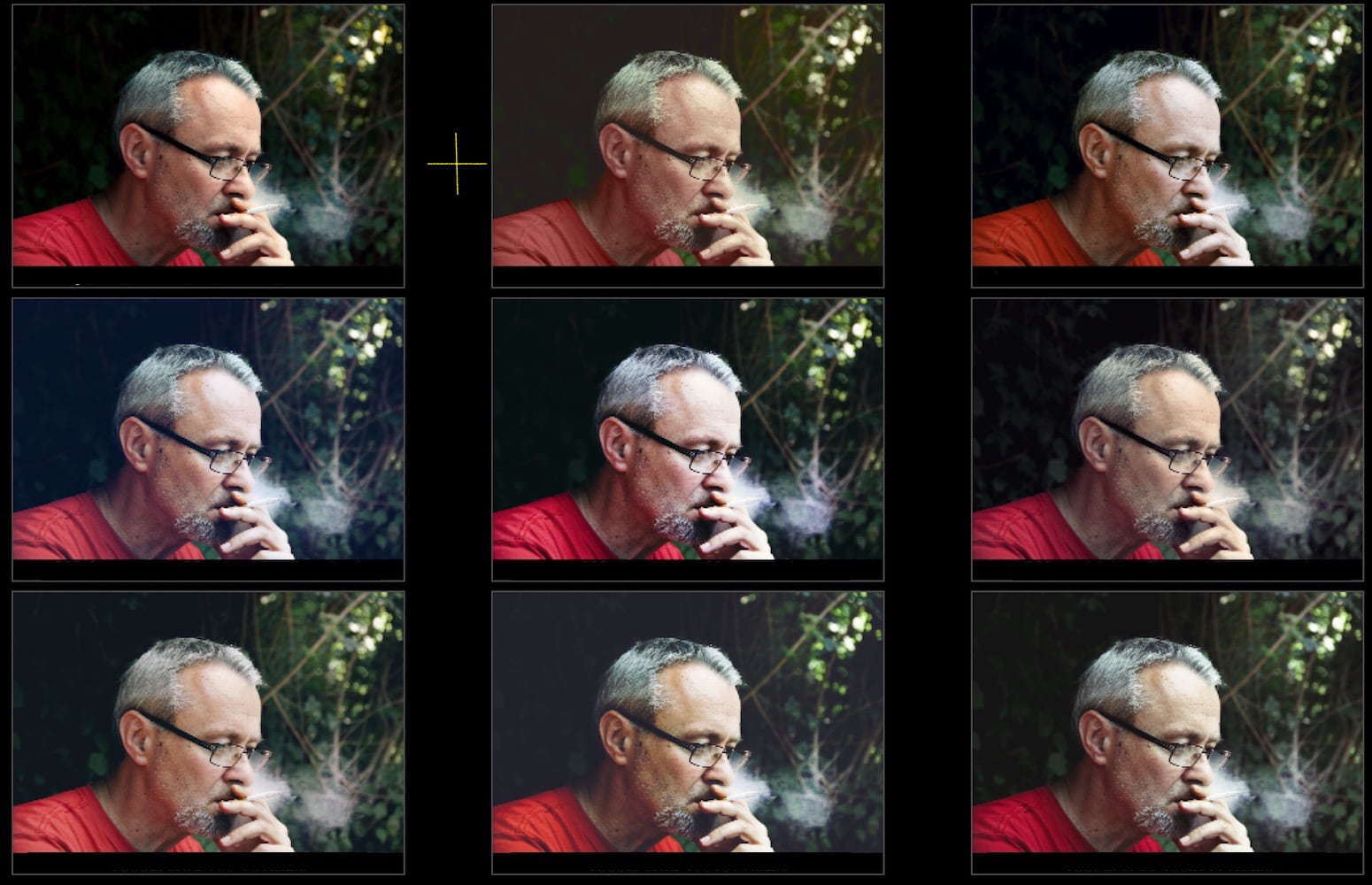 Finally in gimp and gmic to apply the LUTs, just normal blend 50%, simple. Then the usual routines dynamic range popcorn… or was it before (?) which had to turn down quite a bit especially the lighter layer and on top of the mess grain offff course =) 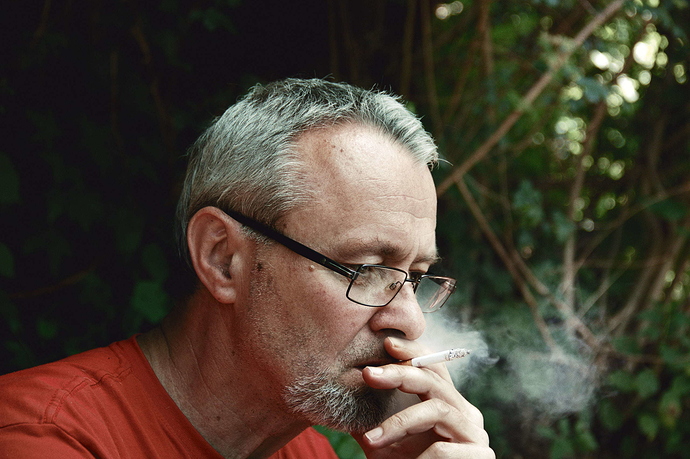 That was a good & fun ride, off to bake the bread, cheers

Good luck with your bread, @chroma_ghost, I’m glad you took the time to do things with this. I’ll go through it again tomorrow, with a “fresh mind”, but I am a friend of your approaches, both when doing photos and when doing text (where my basic Yasser Arafat English isn’t good enough).

The annoying t-shirt is what you usually get, where one takes the first clean one (never ironed) in the “morning”.

The slightly greenish guy’s grey hair might indicate some mosses living there. (Or is it my monitor? Or both circumstances?)

Anyway, it was really nice to hear from you, thanks, bee fine!

That was a good & fun ride, off to bake the bread, cheers

Way to multitask! Photo of your smoking hot bread or it didn’t happen!

The first thing I noticed was the “triangle”; his head dead center, the blood coming from the bottom, light on the right and darker on the left. – I wish I had the time to go on about how many films and characters, even stories, books and philosophical theories; associations, thoughts, etc. went on through my head, a storm a true brainstorm =)

Yeah, that was what I noticed too. I also couldn’t help but notice the shape of his head. With the jawline, his head is like an apricot seed or a teardrop (esp. apparent in @Wocket’s crop). Anyway, good take. I would have done the same in the initial steps but I am too lazy to tackle this PlayRaw (also major back pains this past week).

@Jacal There is something going on with his ear (esp. apparent in @shreedhar’s take). It looks like plastic for some reason; maybe the texture or color…

It looks like plastic for some reason; maybe the texture or color…

Could be the bad, old equipment, and an incompetent photographer. Or, maybe, many veterans have plastic ears. This guy has seen attack ships on fire off the shoulder of Orion.