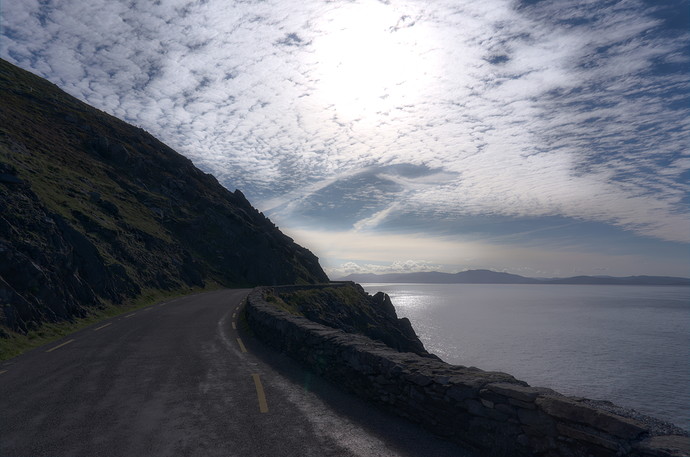 Hi everyone. This is one of my favorite shots from my trip to Ireland. It is merged from three images with 2 EV intervals via hdrmerge. I find it quite difficult to maintain a natural look while trying to recreate what I imagine myself to have seen. Maybe I don’t have the tools since I’m pretty new to the photo editing game. So I am curious what the veterans can do

Edit: Opened it up for darktable.
Edit: Since some of you maybe are achieving better results with the darktable hdrmerge operation as the standlone hdrmerge application I provide the original three raw images for this hdr shot:

Edit: This is the Google Street View in the same direction 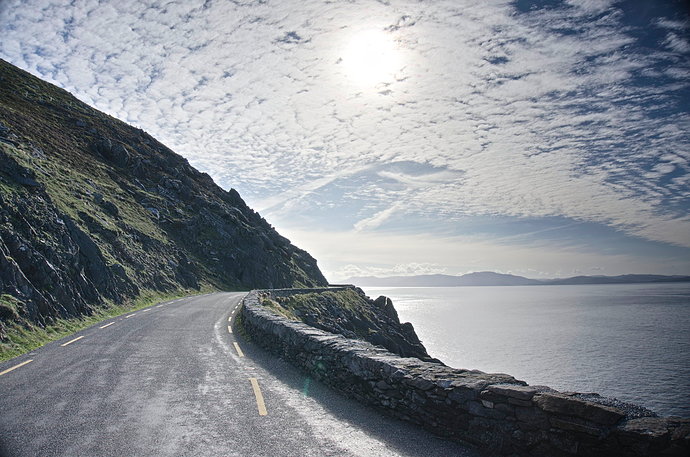 Interesting combination. I’m also messing with HDRMerge, with raws produced by my camera’s HDR mode, and I have yet to divine the rhymes and reasons behind its exposure strategy

I had to do a more aggressive tone-lift that I would have thought, given the amalgam of three exposures separated by 2EV: 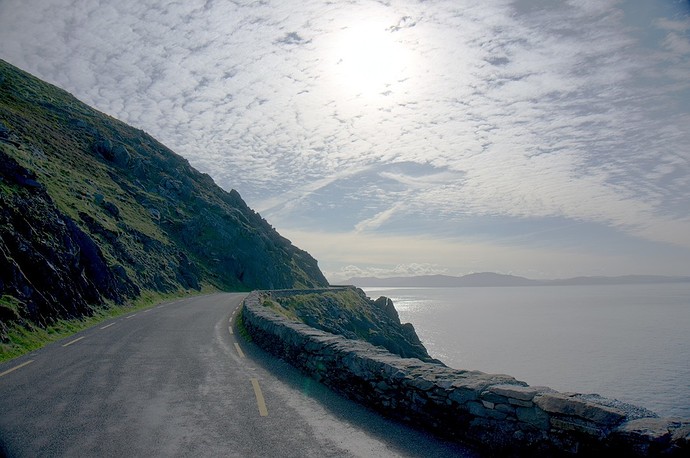 Thanks for posting, not an easy one, HDRMerge pre-processing make it difficult to process ( cannot succeed to recover highlights)
darktable 3.4.1 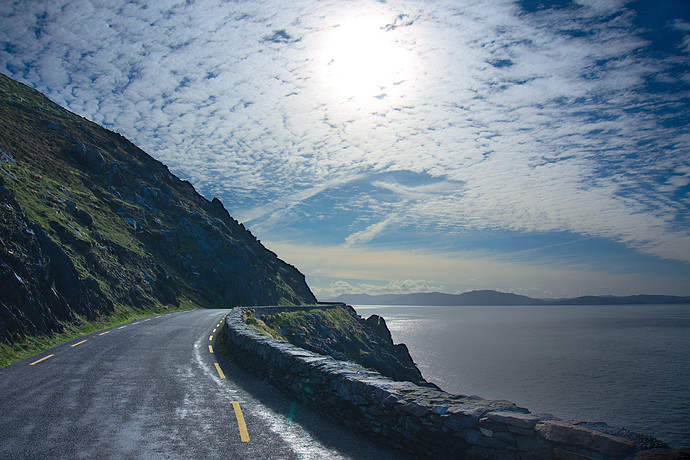 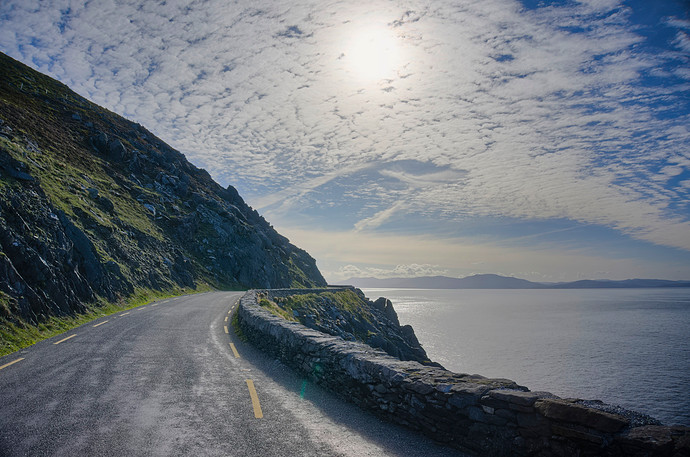 With this kind of backlighting I might have overdone the saturation of the colours a tad. But I wasn’t there, so this is a guestimate. 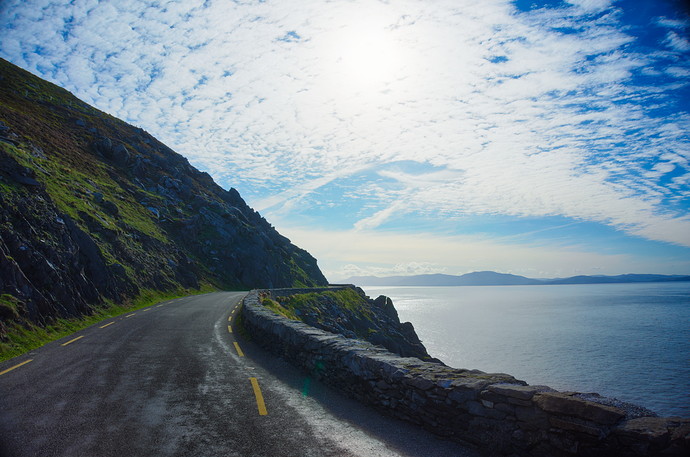 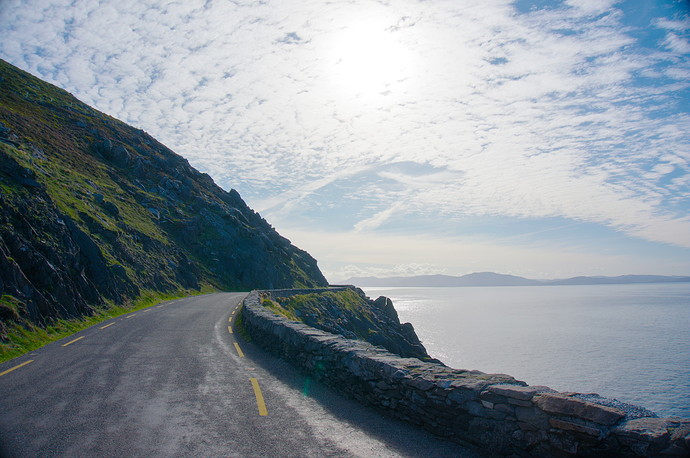 Thanks for your great interpreations

I like the more bright approach for the land section all of you followed. But in this process there seems to come a bluish tint on the rocks, which just looks a little off.

Can it be that this problem is caused by the HDRMerge process? Eventually the +2 EV shot used by HDRMerge for the land/rock section has a different white balanced as the two other shots used for the sea and sky section of the image. (There is for sure a way to make the rocks less blue and more brown while keeping them brighter but specifically targeting one texture feels not the right way when trying to achieve a natural look.)

Amazing image. But it surely was harder to edit than I expected. 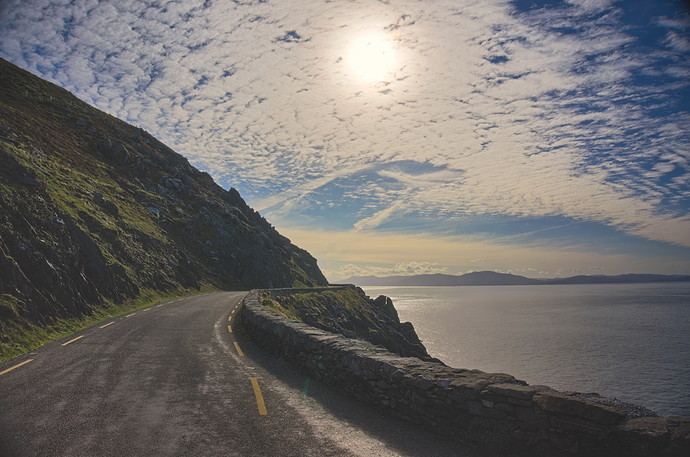 Yes, I tried to counter the blue tint with RGB curves. I don’t know if the white balance of the raw file is an issue. I also just saw that you posted the single exposures so I might try my hand on those again.

Starting from the brighter shot with ART 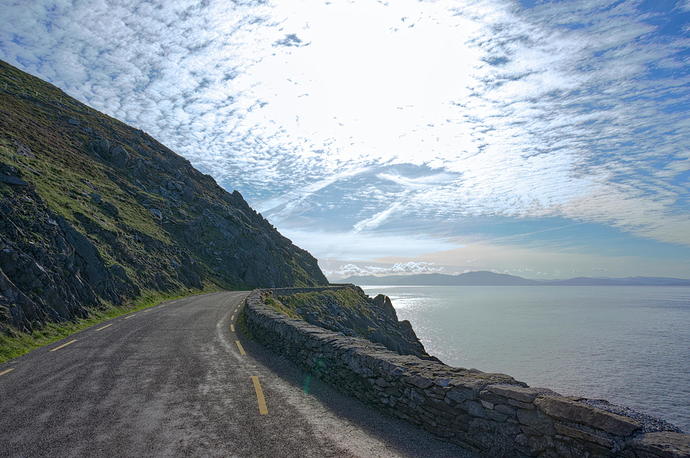 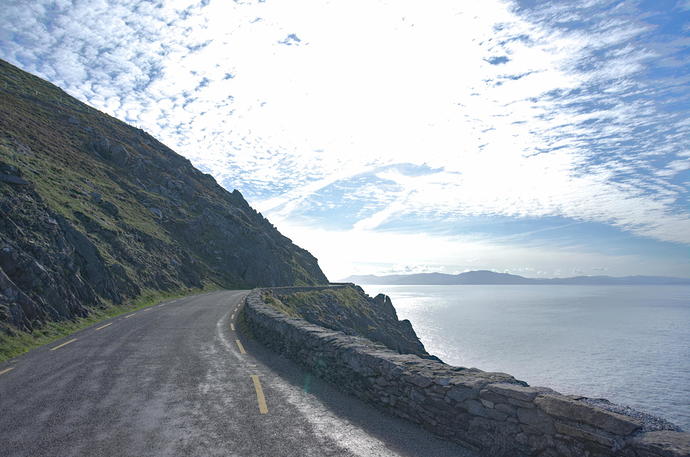 @Boo Dingle Peninsula is fantastic. Did you also make the boat tour to Blasket Islands?

A fabulous place @Boo , thanks for sharing. Here’s an attempt using RT’s Log Encoding with Ciecam in the dev version. 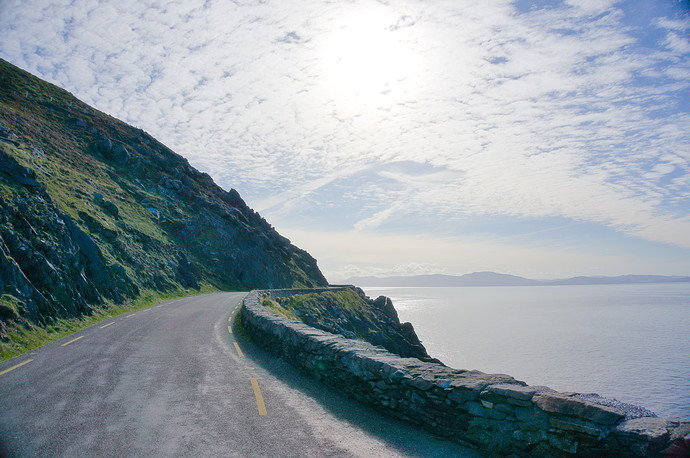 Great shot and quite challenging to me! 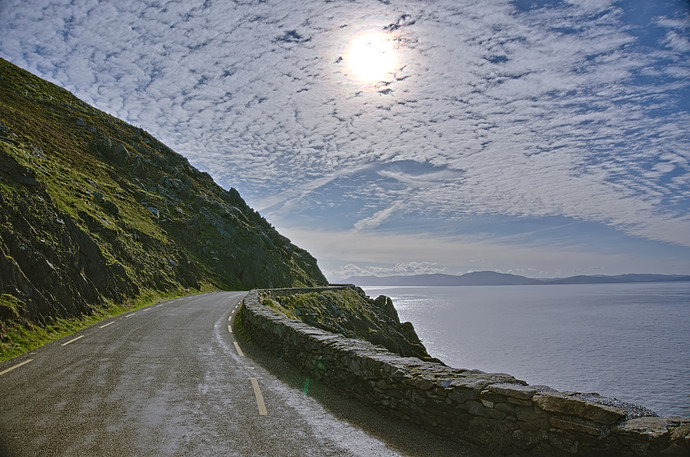 btw: RT’s Haze Removal does wierd things on this image!

@heckflosse
Yes the nature there was really impressive. We did not make the boat tour since we took the atlantic way to the south until kerry cliffs and drove through Killarney national park to dublin all on the same day.

I like the more bright approach for the land section all of you followed. But in this process there seems to come a bluish tint on the rocks, which just looks a little off.

I actually brought out the blues on the rocks a bit using the HSV Equalizer and the CIE c.a.m. 2002 modules.

The blue sky (at the very top right of the image) is a bit much though and honestly I’m not all that happy with it. I should have isolated that area and toned it down some.

As mentioned by others: This isn’t the easiest shot to edit. But that does make it a nice challenge.

Oh and I forgot to mention in my previous reply: Welcome to Pixls!

@Jade_NL: Thank you, lurked a lot here - this is really a nice place on the internet with passionate people for photography - so I thought I bring my personal little challenge to the party

Regarding the blue tint on the rocks: This google street view (https://goo.gl/maps/AsB6zXNnb7ASmZA16) of the same place matches perspective and even the sun stands in a comparable angle to the camera. There the rocks have more like a brownish tint, the grass is green and the stripes on the street are yellow. I just seems more natural in my eyes. Is it just me or what do you think? 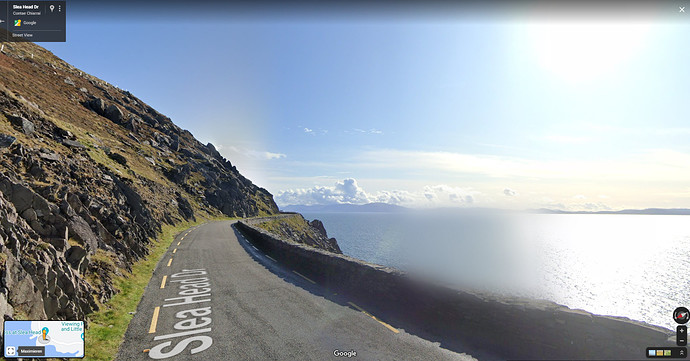 I suspect my camera made something funky between the exposures. So in order to achieve the same tone without messing with the sky I would have to apply area specific processing in gimp or other tools. My idea is that the land section just needs a different white balance setting than the sky section. Is this theory possibly sound or I am on the wrong track? 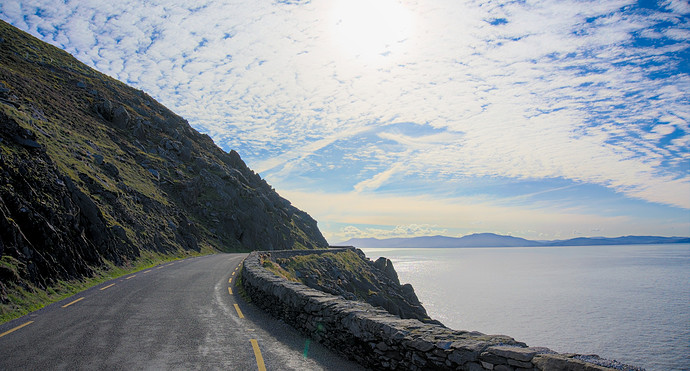 There the rocks have more like a brownish tint, the grass is green and the stripes on the street are yellow. I just seems more natural in my eyes. Is it just me or what do you think?

For colour comparison, here a shot from the same area (~5 km distance) shot in May 2008. The colour of heckflosse in the picture is very close to its real colour 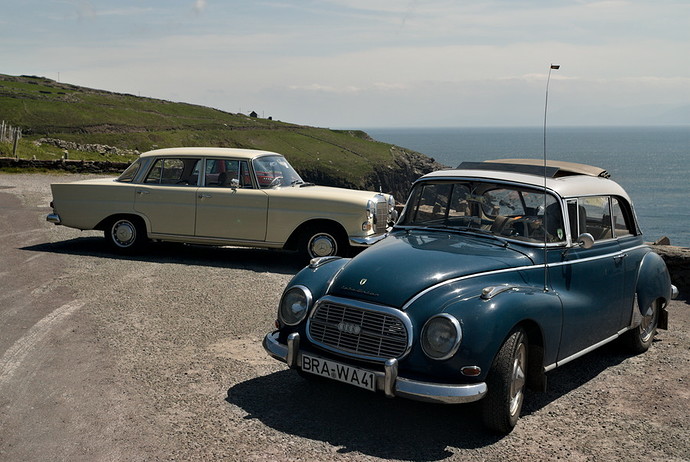 Yes, it is! I also followed your route. First a long time lurker/reader and a little over a year ago I joined and became an active participant.

Regarding the blue tint on the rocks: This google street view […]

I’m rather hesitant to use a (google or other) street view image as baseline for colours (et al). You must have noticed that there are some really strange things going on in the screen-grab you posted. Besides that, we don’t know anything about how it was taken, compression, post processing (if any) and the likes.

The light (Sun) in your image is heads-on, so there’s a decent amount of glare and as a result the colours are less saturated. How much is a question that I think will remain open, but as I mentioned when posting my edit: I do think I overdid the saturation somewhat.

About “cutting the image in half”. Not sure if you looked at my sidecar, but I did use a graduated filter to separate sky from the rest.

I’m not sure you should apply 2 different white balance values though. RawTherapee has some nice tools to target individual areas:

This module can use masks based on Hue and/or Chroma an/or Luminance and can use multiple instances. I used 2 masked instances in my edit. A very powerful module which can also be used for colour grading/toning (using one of the first 3 methods).

This section is not available yet in the official stable version. You need to build RT yourself or grab this, slightly older development appimage.

A very powerful module that can target just about any part of an image and then use most of the tools available in RT. It is already part of the on-line doc: RawPedia Local Adjustments

@heckflosse: Nice cars. Especially the one in front! I backpacked through that area. Ireland is a bit to broad to do by foot to be honest, but man is it beautiful.