As mentioned in this thread, I am playing around with the negadoctor, and when I use the Standard Color Matrix input profile, I always get oversaturated greens. The only way I can get natural colors is with Linear Rec2020 RGB. So I’d like to see if any of you lot are able to get something sensible out of this.
For reference, this is the result with Linear Rec2020 RGB and Negadoctor: 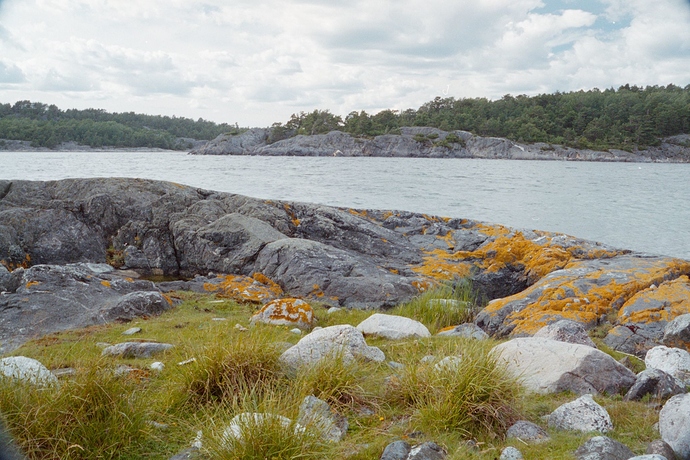 And this is what I get with Standard Color Matrix and Negadoctor: 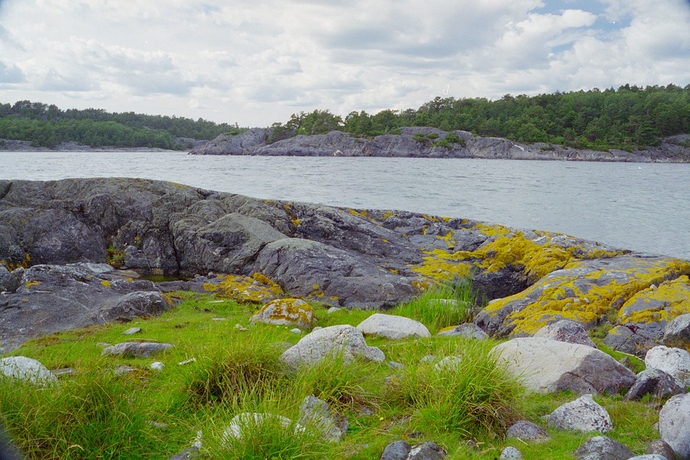 I have not used any other modules that alter the image, except white balance, and I would like you to do the same. This is not about making a finished result, but about how to get the most out of Negadoctor in the correct way. 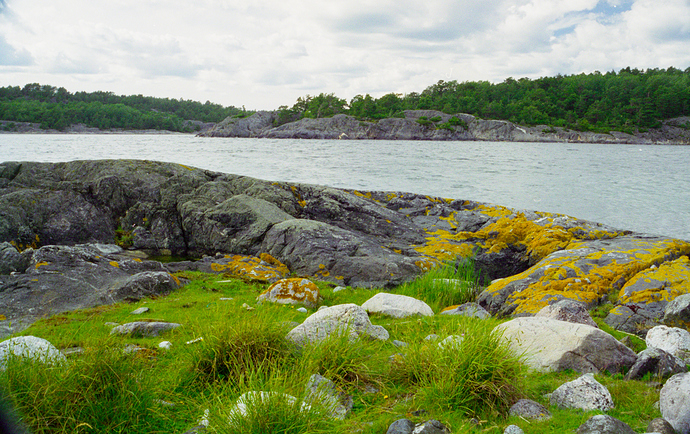 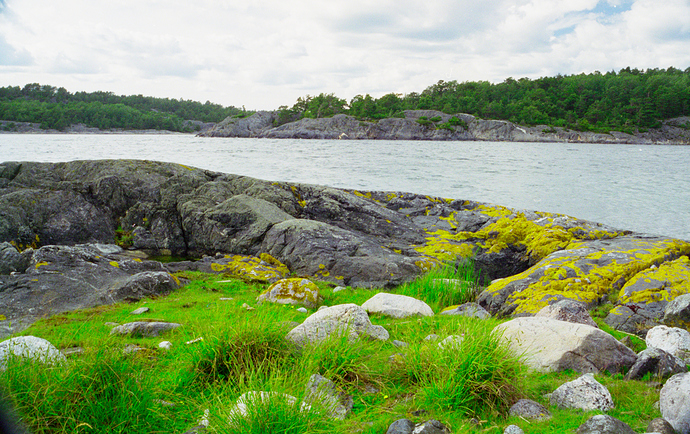 Yes, it looks better, but still way too much green. The yellow lichen is quite good, though.

I couldn’t calm down the greens without using other modules. The question for me is what colour the lichen on the rocks is in real life, because it could be more greenish or yellowish. 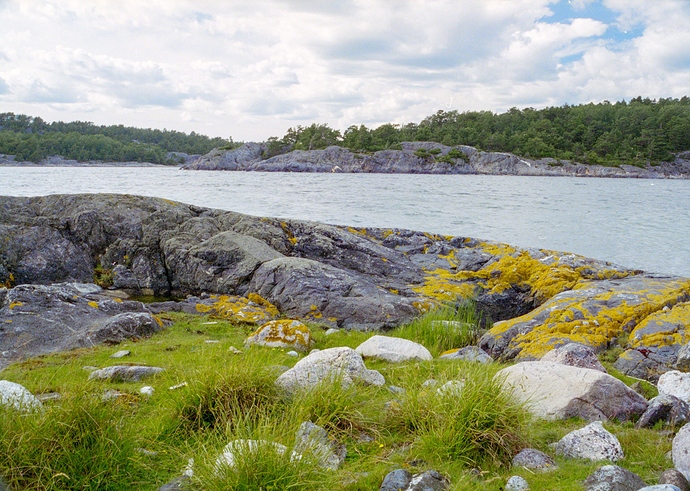 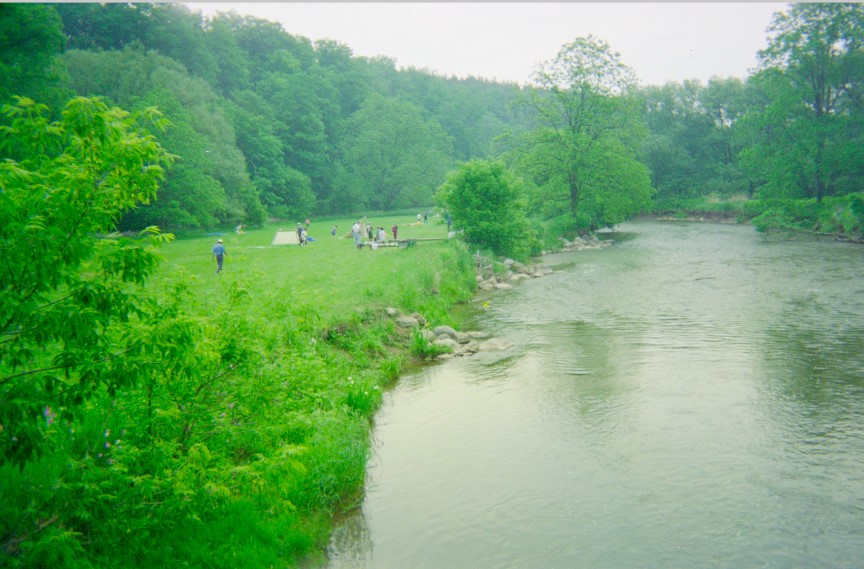 Still a lot of oversaturation

some tests with rawtherapee (old dev version 2450) and dcp profiles 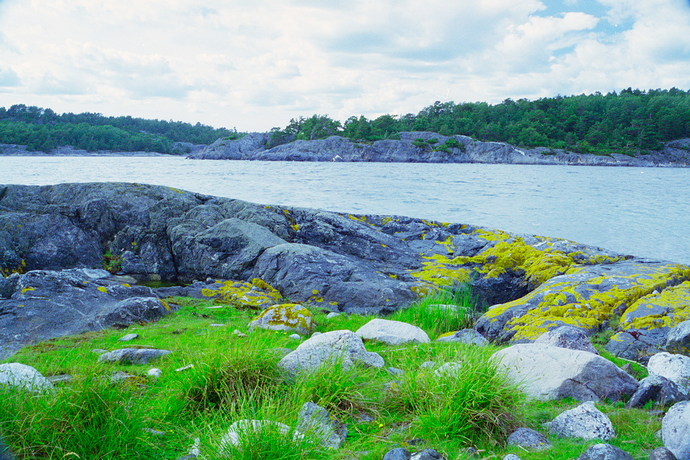 inverted with curves after the input matrix and dcp 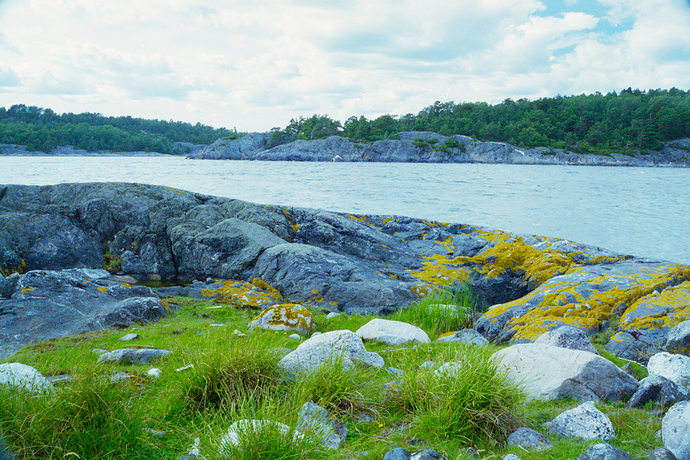 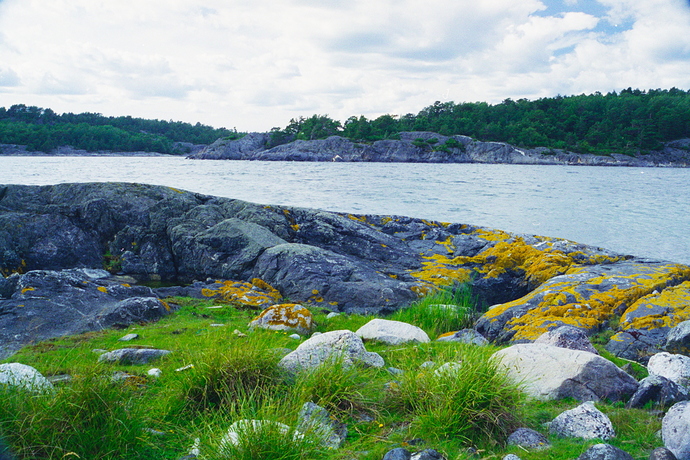 Inverted with the inversion tool and dcp 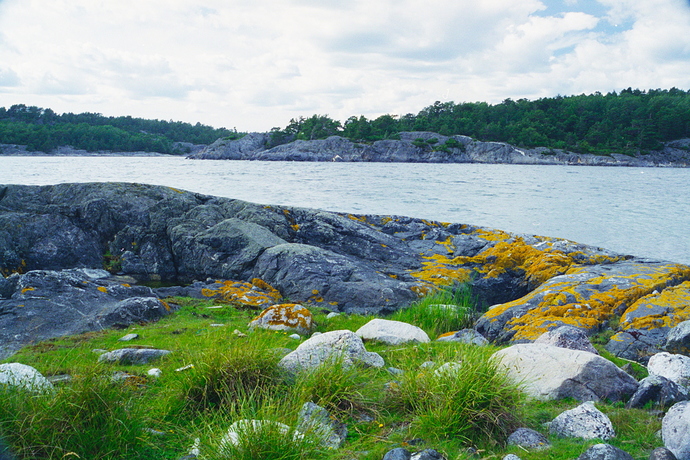 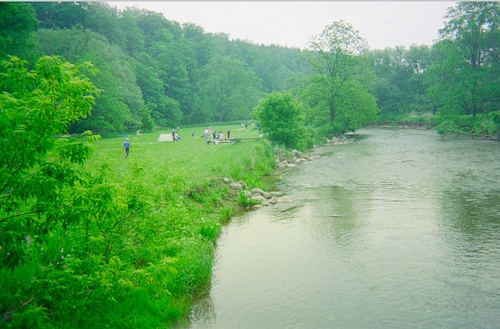 Still a lot of oversaturation

I took the .cr2 and developed it with my own toolchain, which only removes the orange cast and inverts the negative. The result of that was a bit over-exposed, so I also applied a curve to pull stuff down: 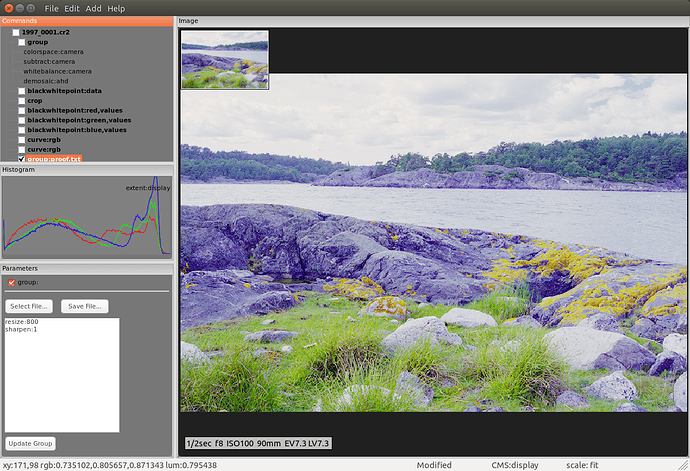 The lichen is kind of orange-yellow, maybe somewhere between your result and what I got with Rec2020.
I think your result as a finished image is the best so far. My Rec2020 image probably has a bit too much red in it, but I can’t remember how green or yellow the grass actually was. It is 24 years old.

Well, not that green. And this is just a random example. I’ve got this on all images I’ve tried the Standard color matrix on. Also, if your inversion was correct, the rock would be grey, not blue.

This is what I got with ART after using the Film Negative tool, picking neutral spots and then doing a white balance and some exposure adjustments (no other colour changes made): 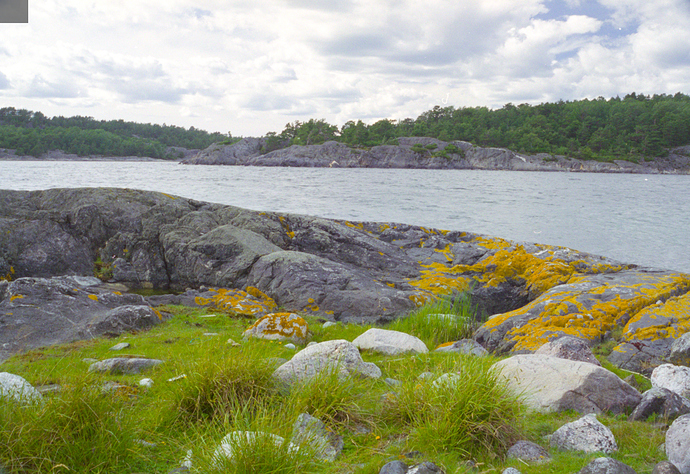 My inversion is four steps:

The first three steps align the channels to remove the orange cast, the fourth step inverts the negative. What’s left is what the film emulsion layers recorded, which obviously need white balancing.

What I’m trying to point out is that the saturated green is what the film recorded.

What I’m trying to point out is that the saturated green is what the film recorded.

I don’t think that’s true. I posted a long reply about what’s going on over in the previous thread (Input color profile to use for negatives), but essentially it’s that 6500k (ish) light emitted by an iPad screen is nothing like D65 daylight used to profile cameras. The iPad is an excellent light source for scanning negatives (better than flash, tungsten, or any “white” LED panel) but when you start using narrow band RGB light sources normal camera profiles will result in extreme saturation and clipping, especially when inverted. Camera profiles can only deal with color, they don’t work when you’re using narrow band illumination to make your camera into a sort of densitometer.

I read your long post, but I’m not quite getting it. It would seem to me that a light source that provides power across the visible spectrum would be preferable for reproduction, as it would provide power to tickle all of the reflectance of the subject. The color reflectance index (CRI) was developed specifically to characterize this, and by that measure tungsten light is one of the best illuminators: 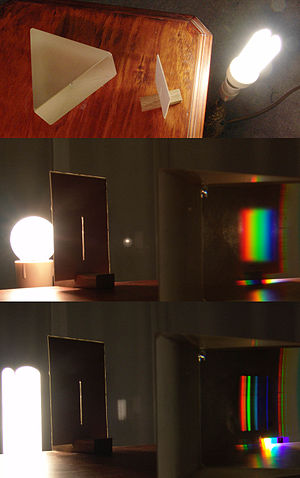 A reference source, such as blackbody radiation, is defined as having a CRI of 100. This is why incandescent lamps have that rating, as they are, in effect, almost blackbody radiators. The best possible faithfulness to a reference is specified by CRI = 100, while the very poorest is specified by a CRI below zero. A high CRI by itself does not imply a good rendition of color, because the reference itself may have an imbalanced SPD if it has an extreme color temperature.

Narrow-band light mixtures rely on human metamerism to make colors. Shining such a light on a subject will only tickle the reflectances that “resonate”, to borrow an audio term, and the metameric amalgam may not be quite what a full bathe of the spectrum would produce.

I think that is the critical issue. I’m using a Dörr LED Flex Panel, set to 4300 K, having a CRI of > 95 Ra. This gives me an excellent base to get natural looking colors after inversion and compensation of the orange mask. Unfortunately the technical specifications I found for this light source do not contain spectra. I had to create several series of test shoots to find optimal parameters (combinations of light source settings / WB settings of the DSLR / WB settings of darktable).

having a CRI of > 95 Ra. This gives me an excellent base to get natural looking colors after inversion and compensation of the orange mask

Now I am a bit confused. From the parallel thread I thought I learned that an illumination at 3 distinct wavelengths would be much better for negatives as the orange mask would not spill into red and green. Now a high-cri spectrum (i.e., more white, including orange) gives better results. Confusing. Any thoughts?

After playing around a while inverting the colors by “hand”, I am quite convinced that they should look somehow like this. Looks “filmic” enough to my 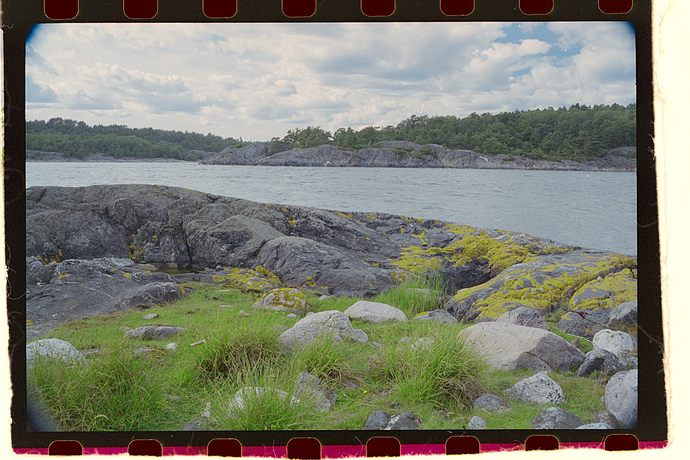 I am reporting. the results of my experiments. I started with a tablet as light source with poor results, and I ended up with the configurable LED Flex Panel. As said, I do not know the spectrum of this device. I took test shoots from the empty focusing screen of the film holder setting the panel to 3000 to 5000 K in 50 K steps. I adjusted the wb of the DSLR to get neutral grey images and I adjusted the wb in darktable to a neutral grey. In a next step I introduced negatives with different base colors. As a result of this (large number) of experiments I found an optimum (compromise of color cast for different film bases) at 4300 K. I have two options now, I can choose the wb of the DSLR or I can individually set the wb manually in dt, whatever gives me the best results.

I have two options now, I can choose the wb of the DSLR or I can individually set the wb manually in dt, whatever gives me the best results.

If I’m not mistaken, there is no real difference between these two options if you shoot raw.

Hm, sounds like you already had a lot of work with your investigations, I think I have to think about the topic a bit more