For my first PlayRaw challenge, I’ll share with you an image taken this summer in front of Al Timon, a nice bar in the Cannaregio quarter, Venezia.

This image was shot at sunset, I put my camera on a tripod and chose to do a long exposure (30 seconds) to both capture the movement of people, and keep a small aperture for keeping a maximum depth of field and getting those stars around the lamp lights.

And now, my edit in RawTherapee: 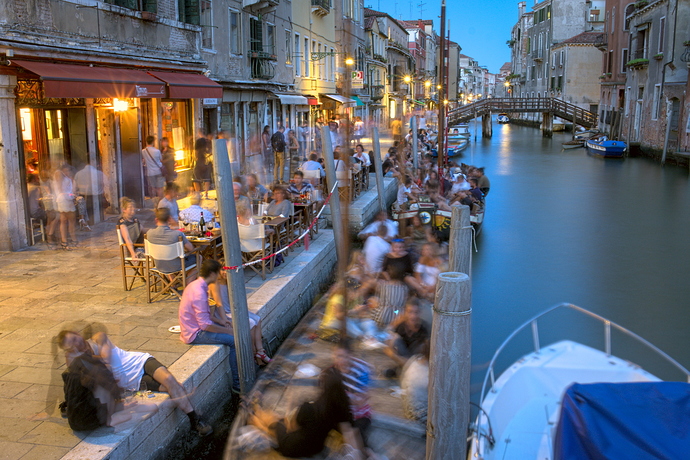 I actually really like the ghosts!
Very nice image. 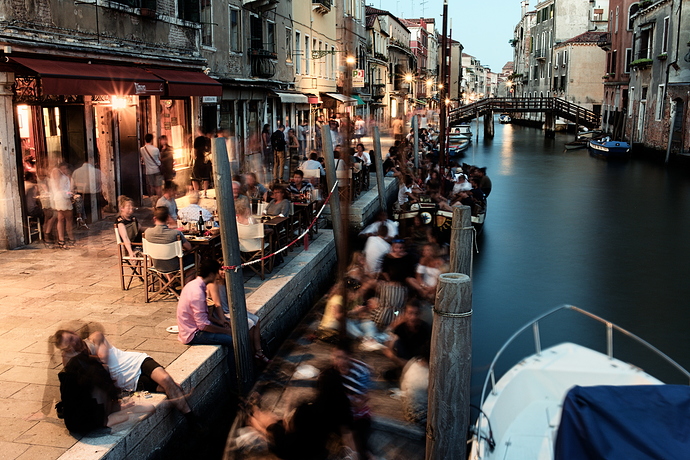 Alberto, I’m sure you had a great time studying in Venizia. You lucky man! 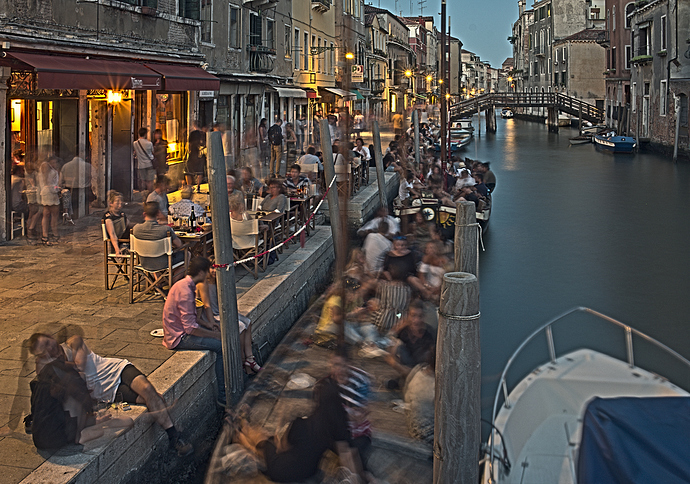 @sguyader Engaging photo. The ghosting reveals the (in)attentiveness of people in conversation.

I found the scene too busy and colors not interesting. Thus, I did a BW rendering in such a manner as to quiet the scene down.
DSCF1719.jpg.out.pp3 (11.1 KB) 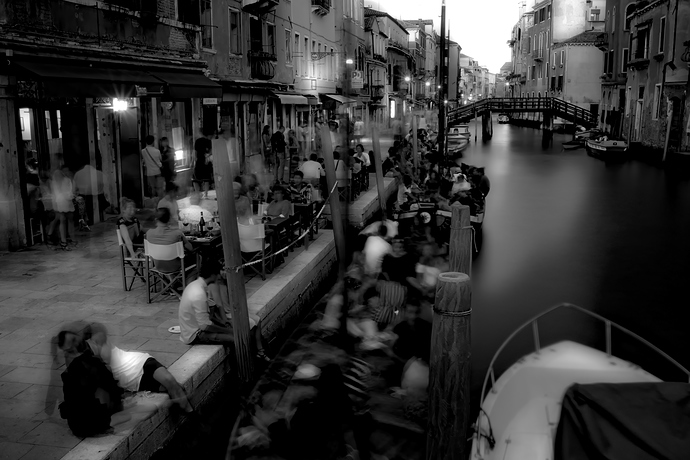 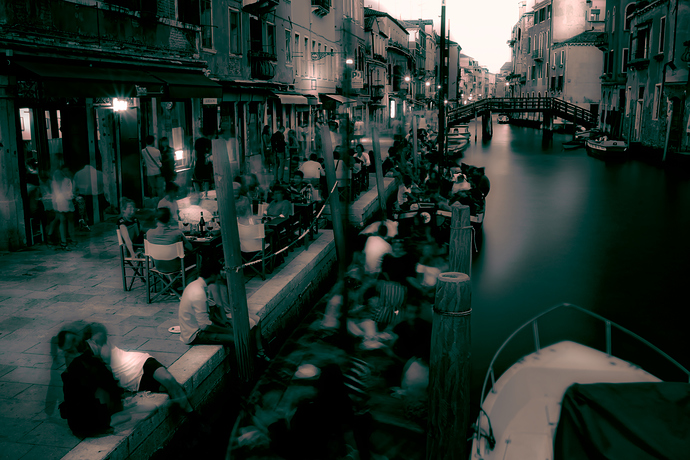 Editing many color curves and equalizers in RawTherapee. Gradient filter to the left side. 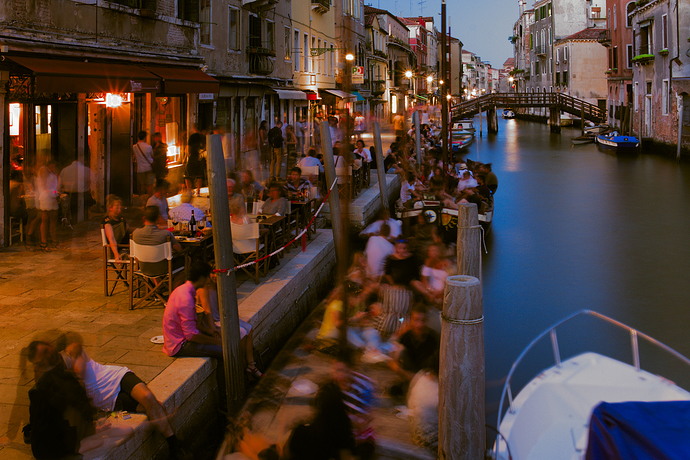 @hiram I think your interpretation is the closest to how it was at the moment I took the photo. I used the new HDRtone mapping filter in RT, which is fun to use but which can render the image very differently from reality.

Merci @sguyader for the royal root canal and all people chiming in, cheers guys =)

We’ve always heard that Raw Developer, now Iridient Developer was very good to the RAFolks… so we (Igor and I) gave it a go go gollllllllllll 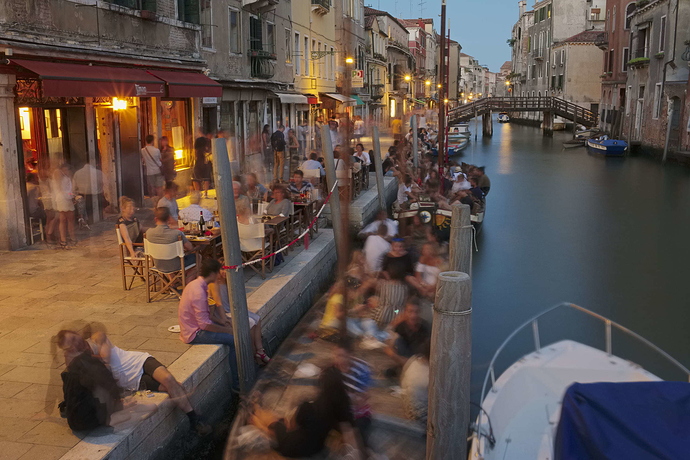 Now to the FOSS and beyond!
Darktable had some WB nightmare about a RAF, judy left it, the new Photoflow renegated from Christ and luma masks, I’m a good christian thus also left it, Rawtherapee was a good sport and behaved surprisingly well.

To me there’s something compressed, almost claustrophobic about this photo – a friend went recently to Venezia, when he came back I asked him, where do the sewers go? He laughed like a madman; so I go to Venezia and the only thing you’re interested is where does the shit go? ja ja ja ja – could not pinpoint what and at first thought it was the POV or maybe the tilt so went to the lens’ room inside RT trying to figure out if there was something I could do… tweaked tweaked, twisted and whistle but things just got worse… like when you try to straighten a pig. At this point I was already thinking about Lautrec… and Paris and the saloons and dancers and the drunk commotion and the gas lights and all of what we would never know at the ending of the XIXth century. I imagined fusing a whirl of colours,light & existentialism into the photograph… but then laziness and the fact that it would take me forever to do (at least in gimp) got me derived to colour, colour is such a powerful tool for lazy people… ah yeah and for artists, ej eje. I can see power colour lines formed by the lights, by the water reflection, by the street’s shoulder… then there’s the bright patch of the sky and splashes of red all over, brighter blue on top, warmer on the left and darker more distant on the right…had some crazy ideas and then just went for the simpler more practical and faster one… but before that, here I left RT 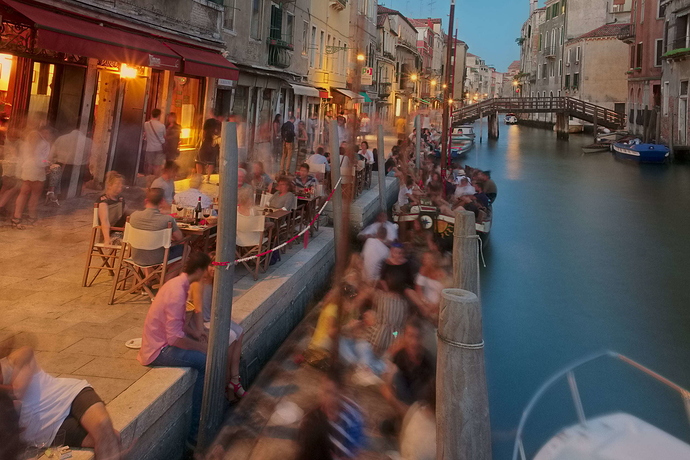 Off to Gimp and G’mix. The main visual damage was done in Color Effex though; I tweaked a “recipee” (for personal REF from Marsupilami series) >> venezia_me_desprezia_pastel_lautrec.zip (741 Bytes) << mind you CE’s pressets don’t carry the U-points 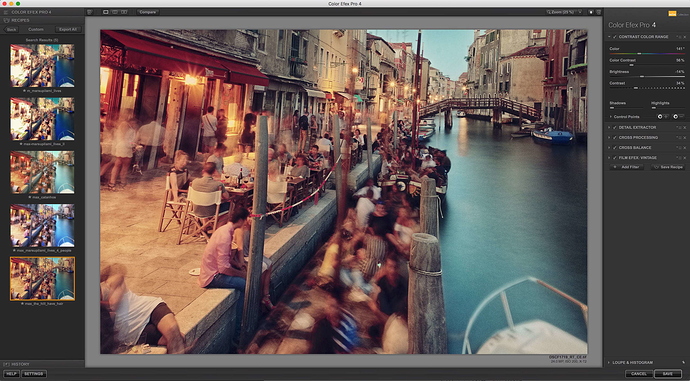 A bit more of tweaRking = gmic’s DR increase, CE, a LUT in soft light mode to separate the wine and the beer, duplicated so could apply only L, a couple grainy ideas and we’re done =) 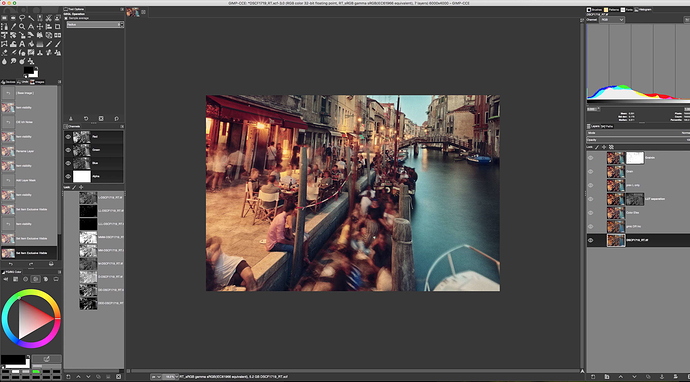 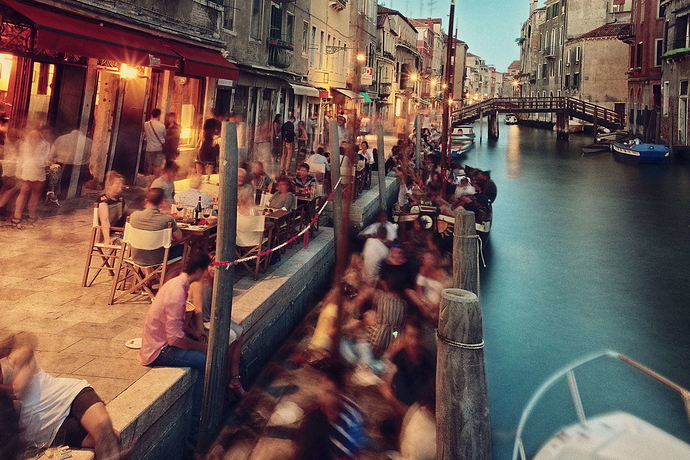 PS
If I may,i’d love to finish these long ramblings with with Lautrec’s Madame Poupoule bei der Toilette 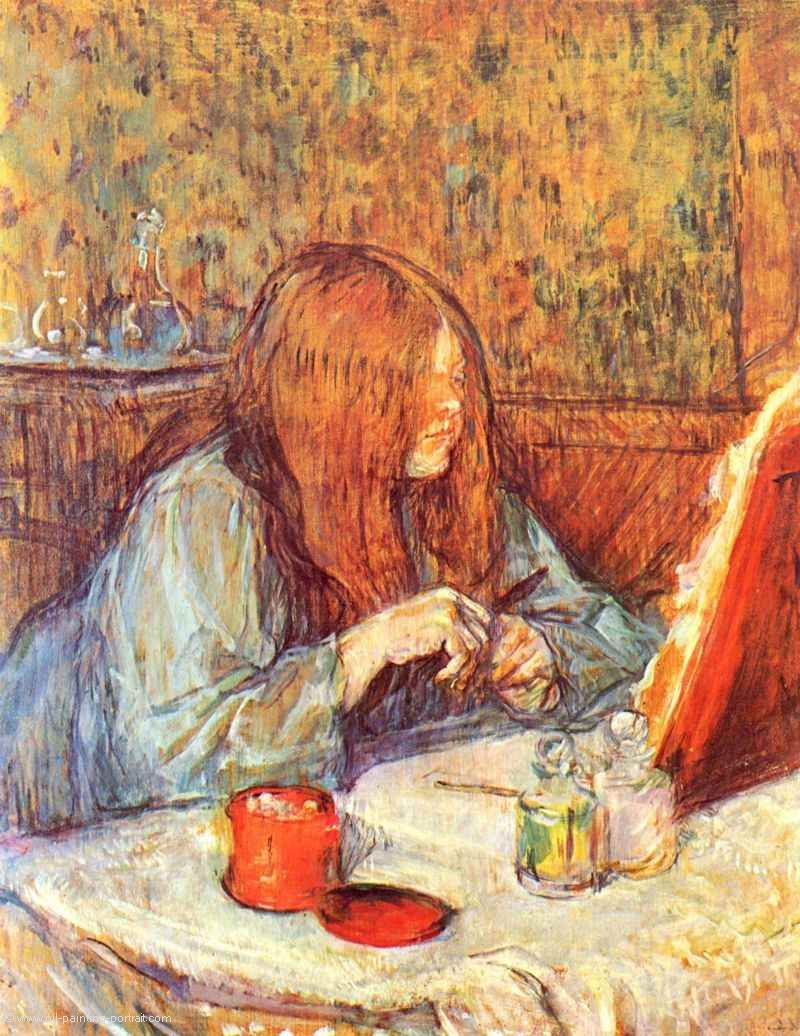 Another kind of painting (from my first edit, done in Gimp with G’MIC presets): 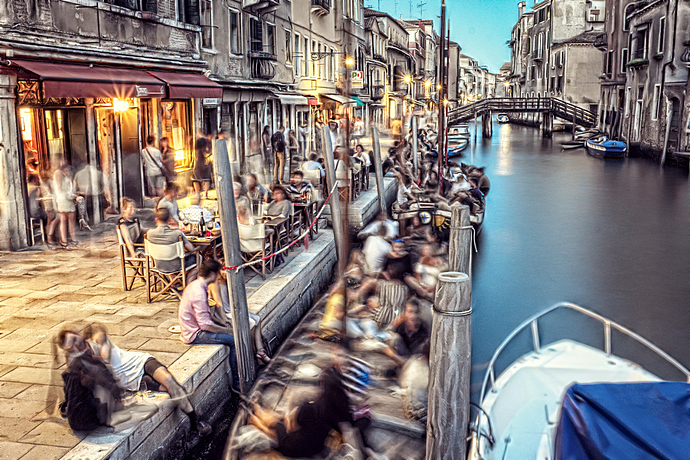 I dig the way the red/yellows and their color balance play off the blues, almost like two completely separate pictures!

@sguyader The more I examine your photo, the more interesting it becomes! Not only are there ghosts, the gentleman in the white shirt is a vampire! 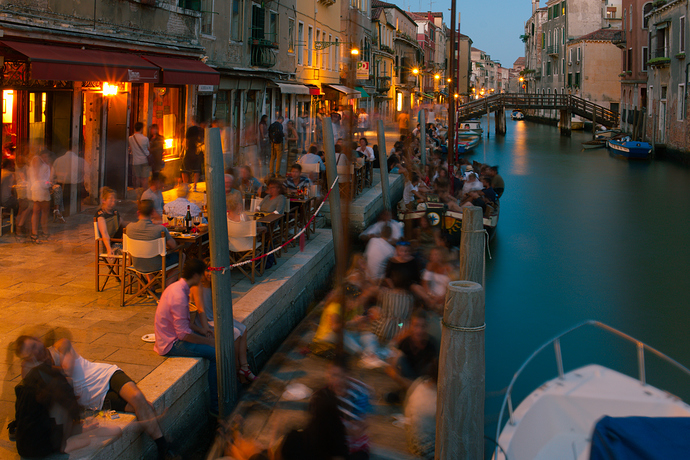 me glad it’s digging through your (paper?) eyes… nurturing the hope that everybody’s about to fall in the canal, rats get together and grab popcorn

@afre a vamp indeed, tried to leave his wrongdoings outside the frame 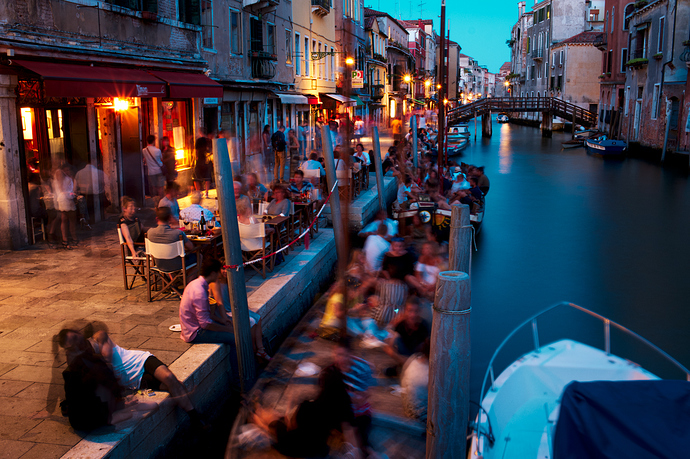 Thanks for the image! 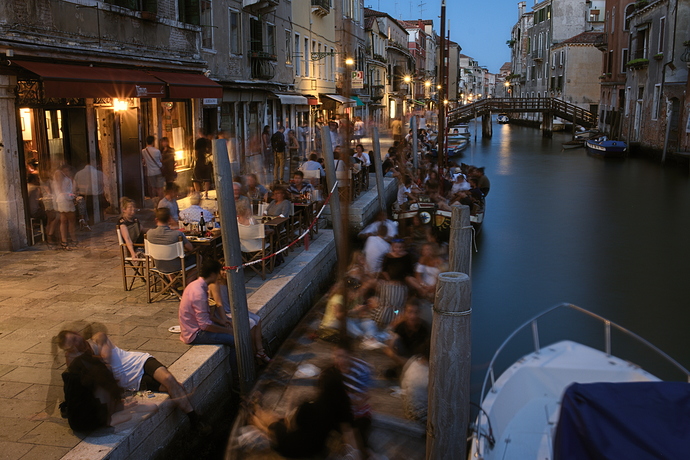 My take in RT. Lot’s of processing this time.
Wanted to make it dark and comfy… 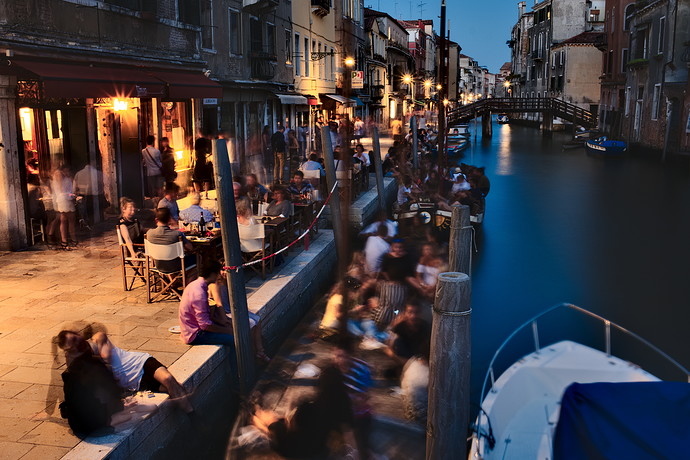