If a file exists that Rapid Photo Downloader recognizes on the download device, it is displayed.

The only exception to this rule is when downloading directly from a camera that has two storage slots (e.g. two memory cards) and the same photo exists in both storage slots. Think of professional-level cameras that can be configured to write the same photo to both memory cards, creating an in-camera backup. In such instances, Rapid Photo Downloader will display and download only one of the duplicate photos [2]. Note the emblems beside the checkmark,which indicate which memory card the files are found on: 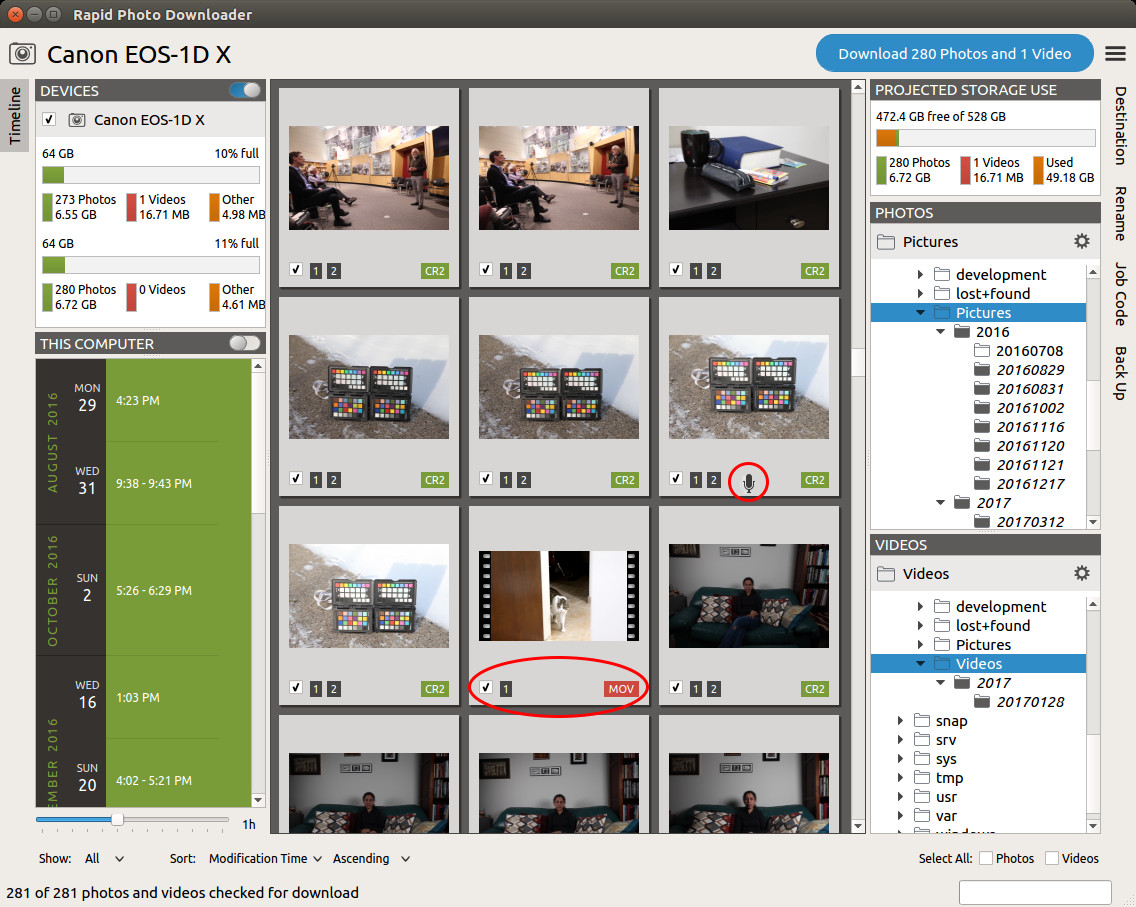 If a file download attempt has been completed, the checkmark beneath its thumbnail changes to an icon indicating whether the download was successful or not: 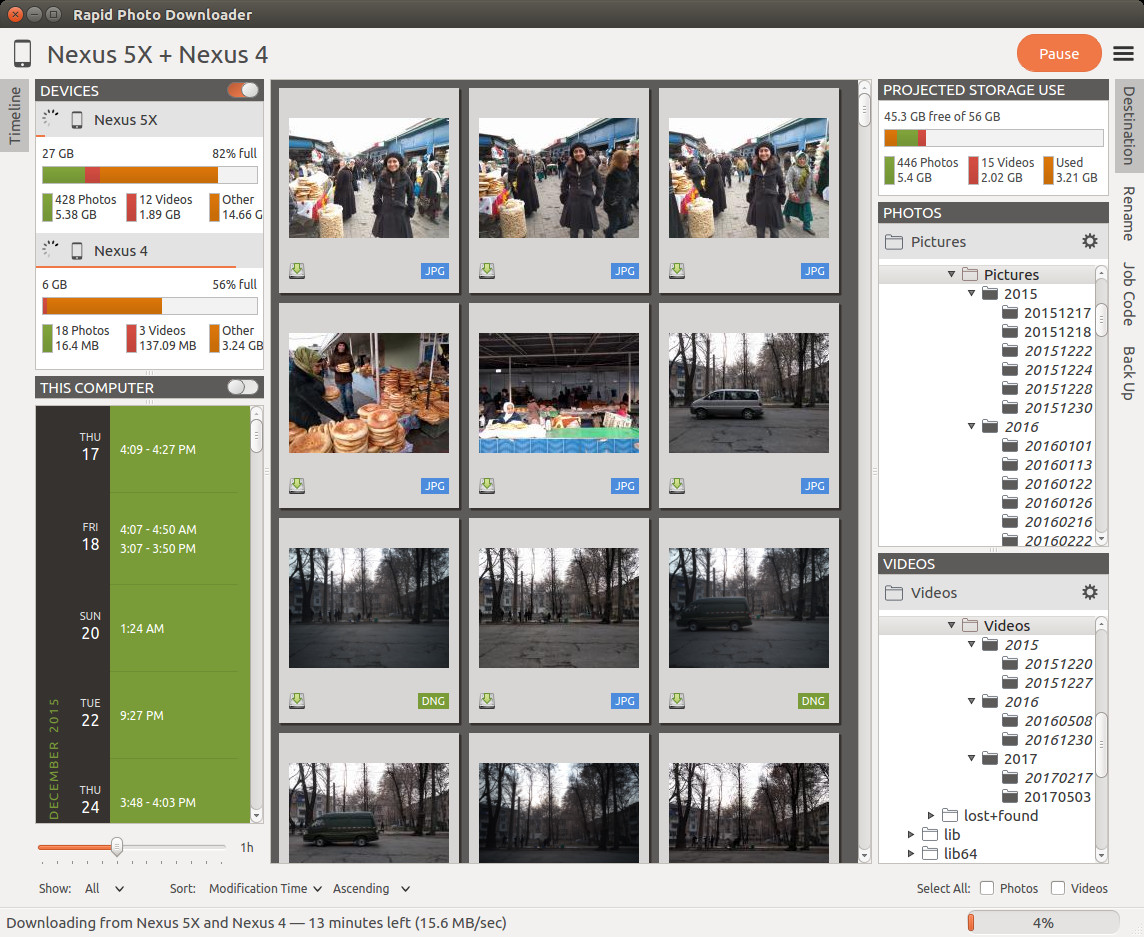 Finally, the main window is cleared of downloaded files only if the user explicitly chooses a main menu option clearing the download files, or exits the program.

The logic behind this simple system is:

While there is much to be said for a system simple, there are downsides too:

The first major downside is that users who are not experienced with the program’s operation, or who are suffering from mental exhaustion after a long day’s shoot, can become confused when they download some files from a device, remove the device and insert again (or simply rescan it). They suddenly see the same file being displayed twice in the main window: the first represents the file they had earlier downloaded, and the second represents the same file on the device.

The following images illustrate the problem. This is what the user sees before downloading: 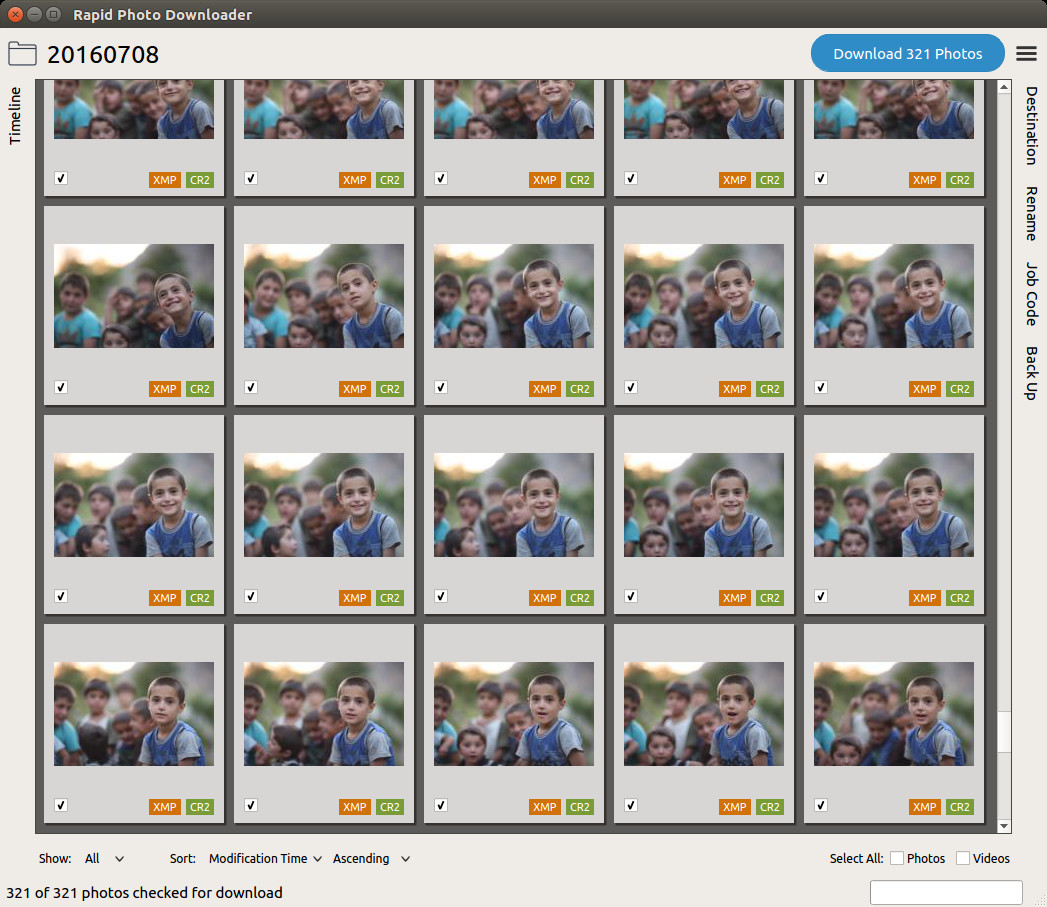 Here, after having already downloaded some files, the user has rescanned the same download source: 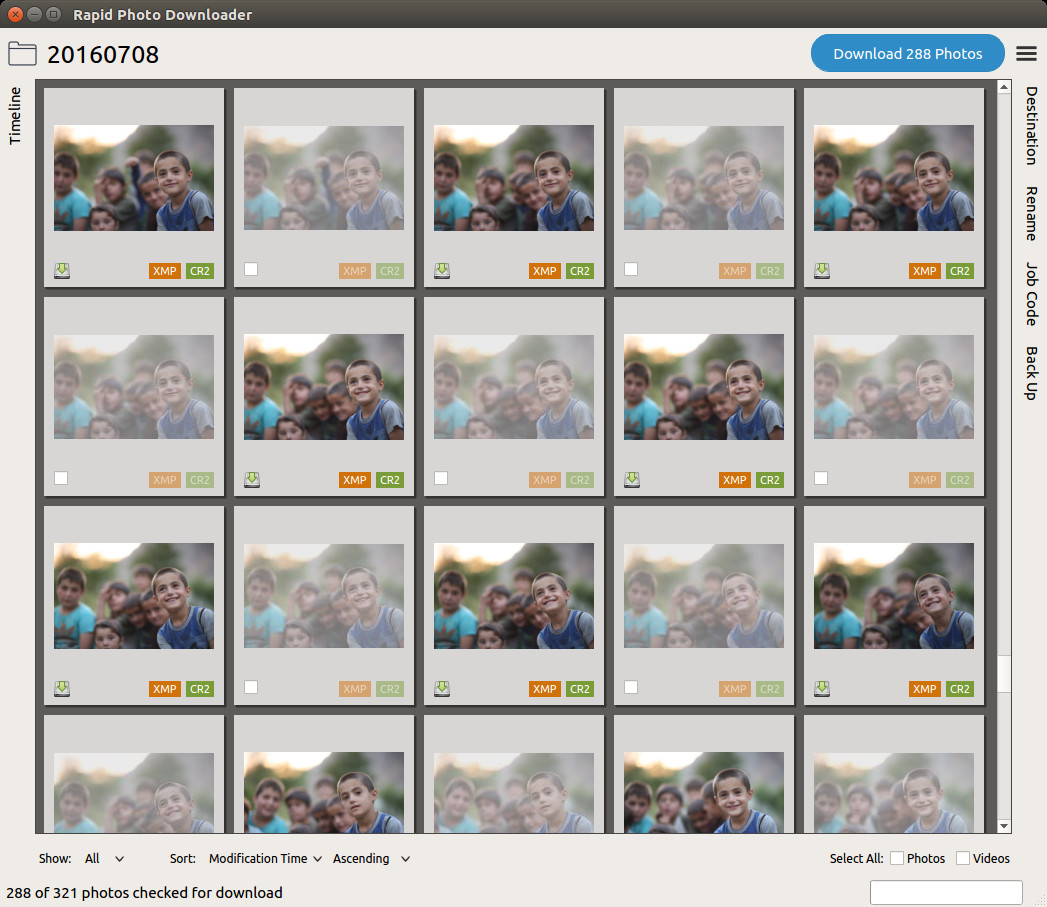 In the screenshot above, a dimmed thumbnail appears beside the thumbnail showing the image had already been downloaded.

The second major downside is that there are workflows where distinguishing duplicate files that come from different download devices would be helpful:

Another reason why distinguishing duplicate files that come from different download devices would be helpful is because it’s currently impossible to treat RAW [3] and JPEG files as one photo in the interface, because a RAW file might have been written to one memory card, and the JPEG to the other:

Note: see Addendum (below) for the criteria that determine when a file is a duplicate or a matching RAW + JPEG pair.

With respect to RAW + JPEG pairs, if the pair are both currently displayed and have not been downloaded, via a program preference provide the option to:

When treating a RAW + JPEG pair as two photos, via another program preference, provide the option to:

Finally, because this proposal may not suit all users, and to maintain the option of keeping existing behavior, the proposed features could be turned on and off (in their entirety, not piecemeal) using the program preferences.

New preference option Consolidate files across devices and downloads when it is enabled: 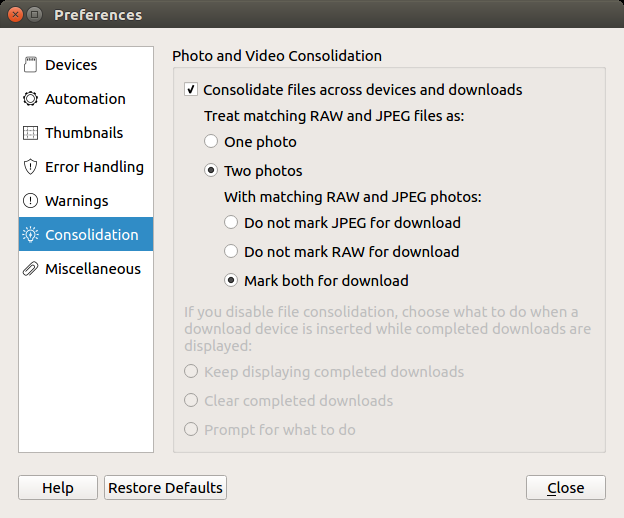 By contrast, here Treat matching RAW + JPEG files as one photo is enabled:

Note that when treated as one photo, it’s impossible to not mark for download one of the pair (because that makes no sense!). 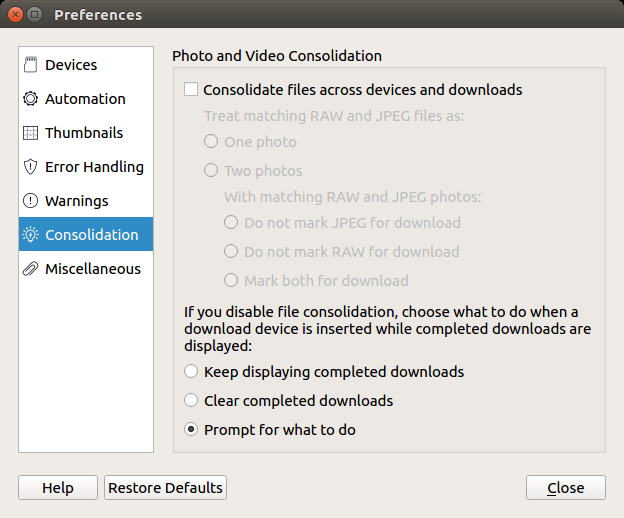 When the new preference option Consolidate files across devices and downloads is disabled, and a new device is inserted, the program will display a message of the following kind: 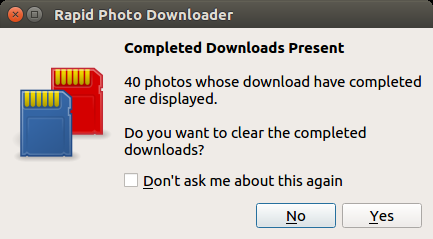 If this proposal is well thought through, and implemented satisfactorily, the program should “just work”, hiding the complexity of various download scenarios. Naïve or exhausted users will not be surprised by duplicate thumbnails for the same file. RAW + JPEG users will have more control and a potentially more efficient workflow.

A file is “the same”, i.e. a duplicate, when its file name and file size match, and its modification time is broadly equal. The same is true of RAW + JPEG pairs: they match when their base filename match and EXIF times are broadly equal. The reason times cannot be strictly compared for equality is that cameras do not necessarily write to two different memory cards at precisely the same time. In fact, much of the time they don’t, because the memory card speeds might differ, free space might differ, or different formats are being written to different cards.

[1] To simplify the discussion, this proposal ignores the fact that the program can be set to filter the display of thumbnails by using the Timeline and by showing only new files. In other words, for the purposes of discussion, a file is “displayed” even if it is hidden due to the aforementioned filtering.

[2] When dual card slots are detected in a camera, the program will display an emblem or emblems showing which memory card the file comes from.

[3] While it’s increasingly true that ‘RAW’ can be written as ‘raw’, I’m following the Canon naming convention for RAW + JPEG. See for instance http://cpn.canon-europe.com/content/education/infobank/image_compression/raw_jpeg_shooting.do

Thank you for reading this far in this lengthy proposal, and I look forward to your comments!

Just a little comment since I am on my mobile, probably more feedback when I am on a real computer next week: Some dialog texts are hard to understand without knowing it beforehand: 1. What is the difference between “treat … as one photo” and “… mark both for download”? 2. What does “clear the completed downloads” mean?

If treating the pair as one photo, display the 2nd of the pair signifying below its thumbnail that it is a RAW + JPEG. If the previously downloaded first of the pair is currently displayed, replace it with the new file, but show in its tooltip that its pair had previously been downloaded.

Sounds good…maybe for further clarity, “…replace it in the display with the new file, …”

I really like this. I shoot RAW+JPEG and have only one slot for SD cards. Normally, I am able to download from both cards in the same session, but there have been situations where I have not been able to.

For your consideration, my workflow:
1: I always shoot RAW+jpeg (well almost, not images intended for hugin)
2: I do NOT remove the SD cards, I plug the came (K3) into a USB3 plug, permanently wired into desktop
3: After selection, on computer images are moved to “Photo” (from Pictures)
4: My NAS backs up “Photos” every 12 hours

I might look at images on other computers (e.g. a laptop) but I’ve only “captured” the image when my main computer has it

To that end , I’d like to configure the main computer to MOVE the images off the card, but other computers to simply copy …copies are always considered ephemeral (MOVE is permanent) If I set SD cards to “duplicate” it’s because I have doubts about a card. To that end I’d like to have BOTH copies downloaded (e.g. 2 sub directories SD1 & SD2) then if e.g. I find that SD2 images are often corrupted I know who the culprit** is.
When going on a shoot I know both cards are clean with plenty of capacity.

To that end I’d like to have BOTH copies downloaded (e.g. 2 sub directories SD1 & SD2)

Interesting point. I’ll keep that in mind. Thanks for your input.

Glad you’re putting so much thought into this useful tool. Thanks for your ongoing efforts to improve it’s usability for a wide audience.

While my needs are simple and well handled by RPD, I’d love to be able to tick a checkbox and have the program ignore all my jpgs. I rarely need to download them, as I usually use RAW only for editing. I use the work around you suggested some months back, and it gets me there, but I’d love to be able to check a box that say’s “Do not import JPG” and go from there.