darktable 3.0 for dummies (in 3 modules) darktable

This week-end, I re-tested the ability to get results close to the OOC JPEG with the scene-linear workflow, on Panasonic and Nikon cameras, because I started to wonder if I was deluded after the load of incomprehension this has started. So, yes, it’s definitely possible and quite fast. Notice that my screen is set for Adobe RGB while Gnome screenshot tool seems to assume it’s sRGB so all colours look desaturated Step 0 : raw [Capture%20d%E2%80%99%C3%A9cran%20du%202020-01-15%2021-41-00] Camer…

I was told that properly-lit scenes were easy to process, but issues arised on under-exposed pictures. So, here is a more challenging example. 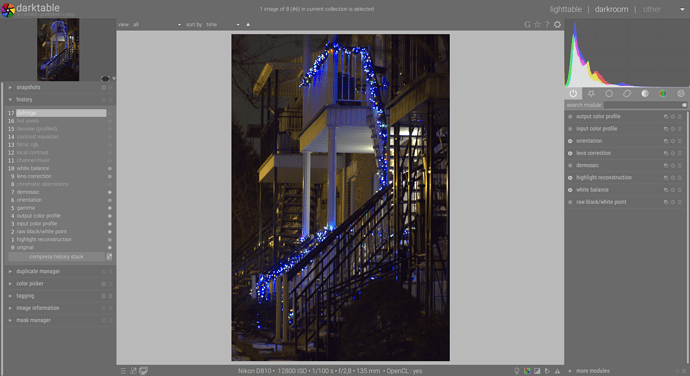 Christmas time in Montréal, ISO cranked up all the way to the top (12800), bright blue lights that will for sure end up out of any RGB gamut, sodium-vapour surround street lighting, we are on for a lot of trouble in this picture.

Just enable it with default params: 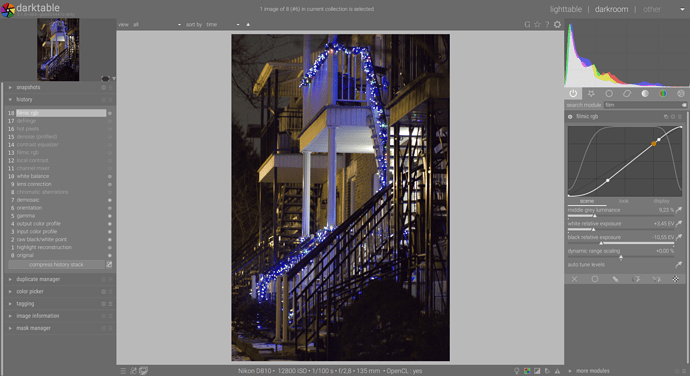 Raise mid-tones up to an acceptable level. We don’t care for highlights yet: 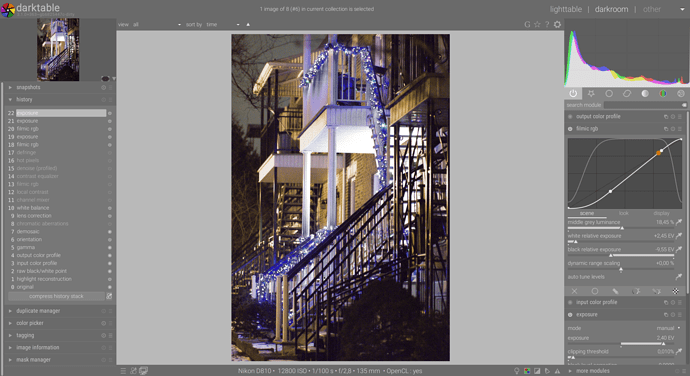 Since we added 2.4 EV in exposure module, and tone equalizer comes after, the first thing to do is to compensate the mask by -2.4 EV so the histogram gets centered in the winlow: 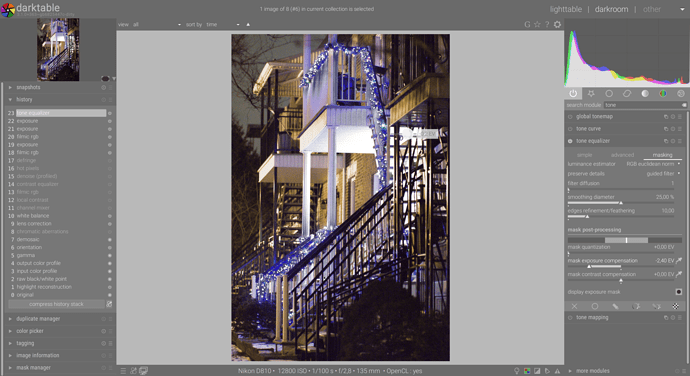 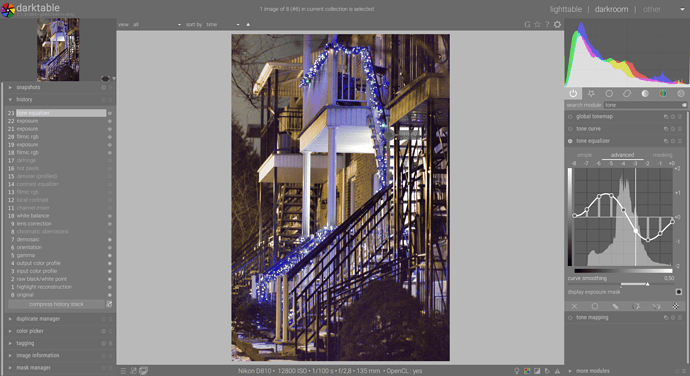 Pro tip: keeping the first node (-8 EV) and the last node (0 EV) to 0 EV give you more natural results, regarding the local contrast. So you end-up with a kind of sinus curve.

Account for the changes in filmic, by setting the scene white exposure accordingly to the image (just use the colour picker), and then raise the scene black exposure to reduce the noise: 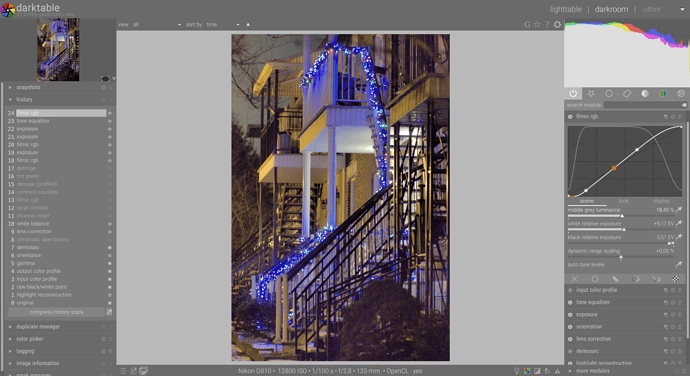 The resulting image is obviously too bright, we loose the nightlight feeling, so we need to raise the scene grey level and re-adjust the black accordingly: 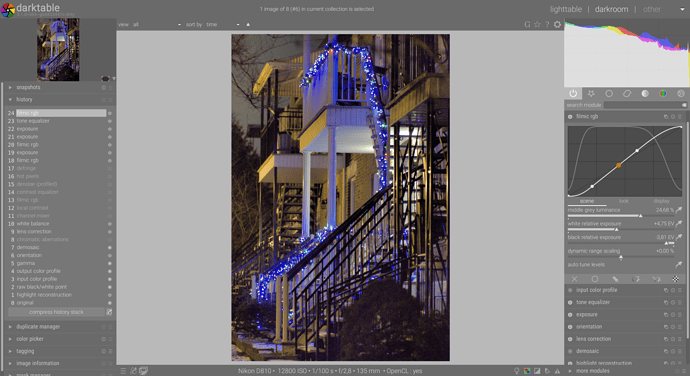 Now the image looks quite flat, so we will raise the look contrast and reduce/slide the latitude (still trying to keep it maximal while not clipping, watch out for the orange parts of the curve): 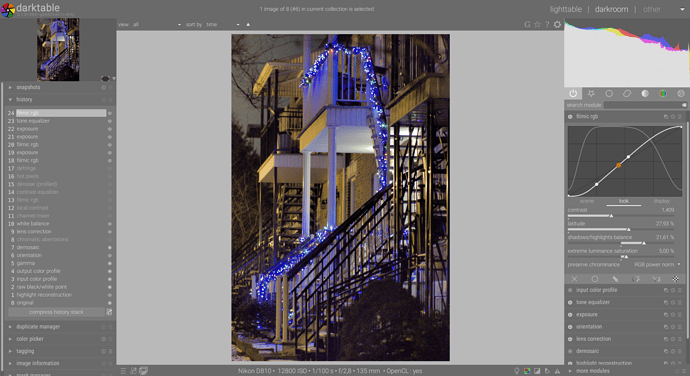 We obviously have 3 sources of light: street lighting (sodium vapour, orange), house lighting (probably fluorescent, white) and the garland (LED blue). We will try to blend them a bit better, while mostly keeping the character of the scene.

Now, the hues are right, but we need to balance the saturation manually to blend the effect better. No trick here, trust your eyes: 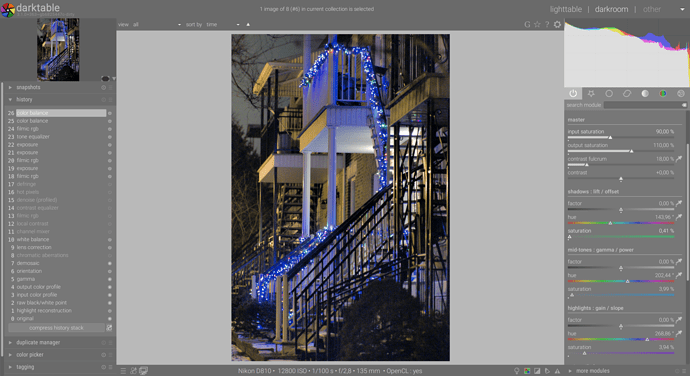 We still need to deal with those out of gamut blues. There is a trick I took from theACES, which involves applying a custom RGB matrix to force those blues back. Unfortunately, the ACES coefficients expect an ACES P1 colour space, and darktable pipeline works in Rec 2020 by default, so the coeff will need to be adjusted.

Here is the result: 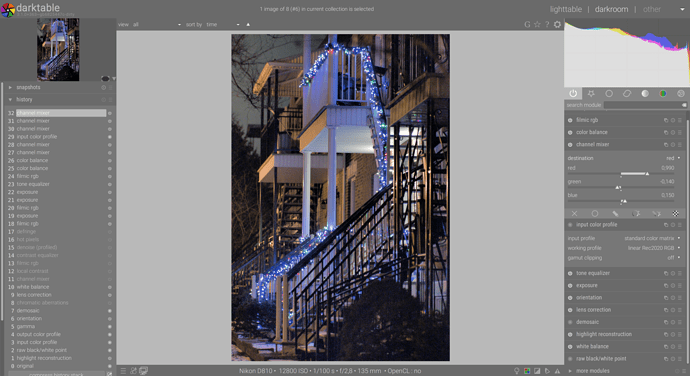 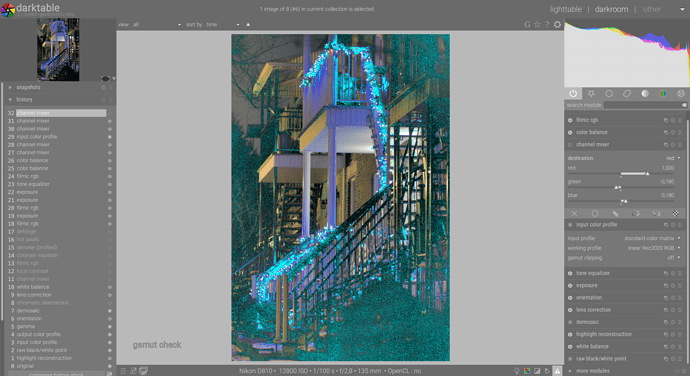 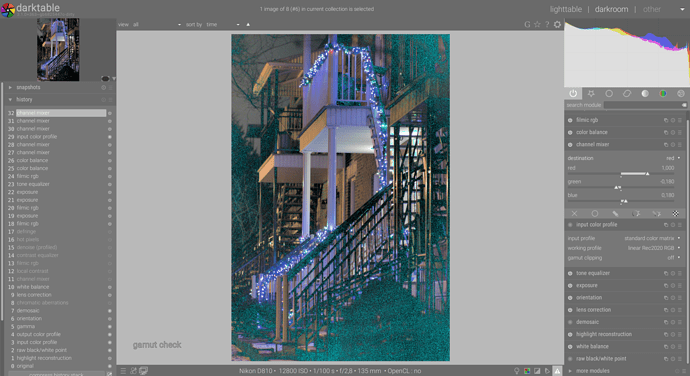 Notice we made those blues lend on the slightly purple side, we could have remapped them to cyan instead. It’s difficult to guess what the “original” blue was since no screen is capable of displaying it, and I took this picture 1 year ago.

(full disclosure: I discovered that channel mixer actually clips the RGB output to [0 ; 1], so these results are obtained with a hacked version of the code, that will hopefully be delivered in darktable 3.0.x as an “unbounded mode”).

And since we were mostly happy with the visual look before the blue lights handling, we will mask the channel mixer to apply it only to the blues shades. 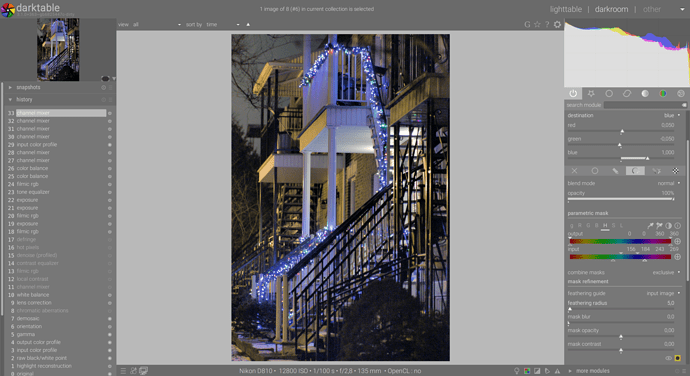 So far, we have performed mostly a corrective editing, with the technical recovery, trying to compensate for the flaws of the digital imaging system. It’s now time to bring back the Christmas groove of the picture, and warm things up. We just use a second instance of color blance: 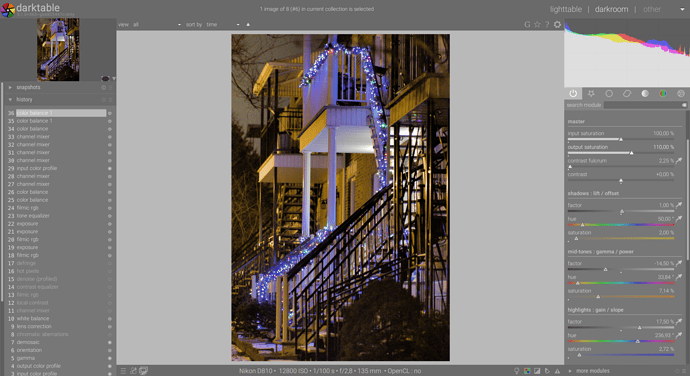 Everything feels warm and cozy, but this sodium light really makes yellow pop up, and we couldn’t get rid of their greenish cast. We will just slightly desaturate and darken them, and drop down their hue a little bit: 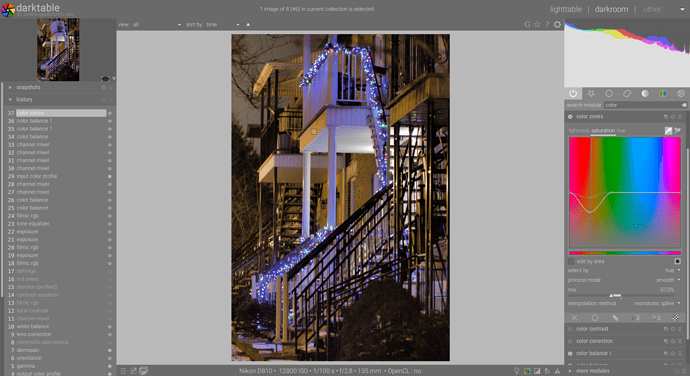 darktable 3.0 makes that part way easier (thanks @rawfiner) : it’s only a matter of enabling the module in auto mode. We kept that part for the last step since it will slow-down the whole software, and also because we didn’t pixel-peep and everything looked great from the full-screen zoom: 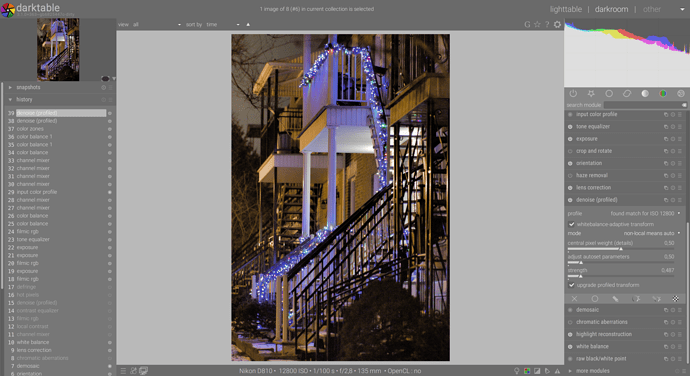 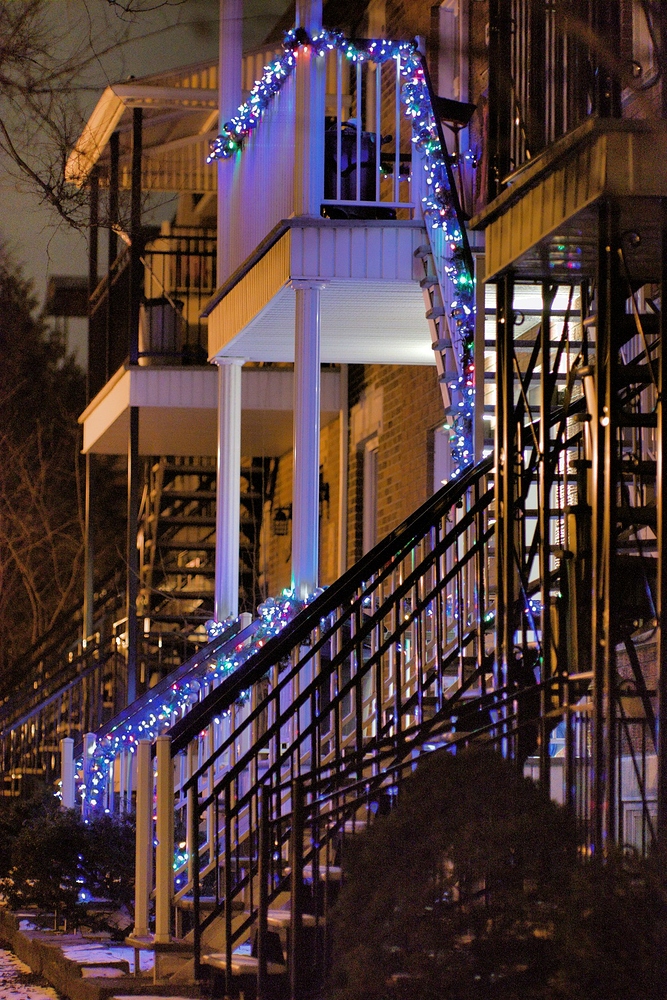 (We just changed filmic scene parameters, allowing some clipping on the white and added more contrast): 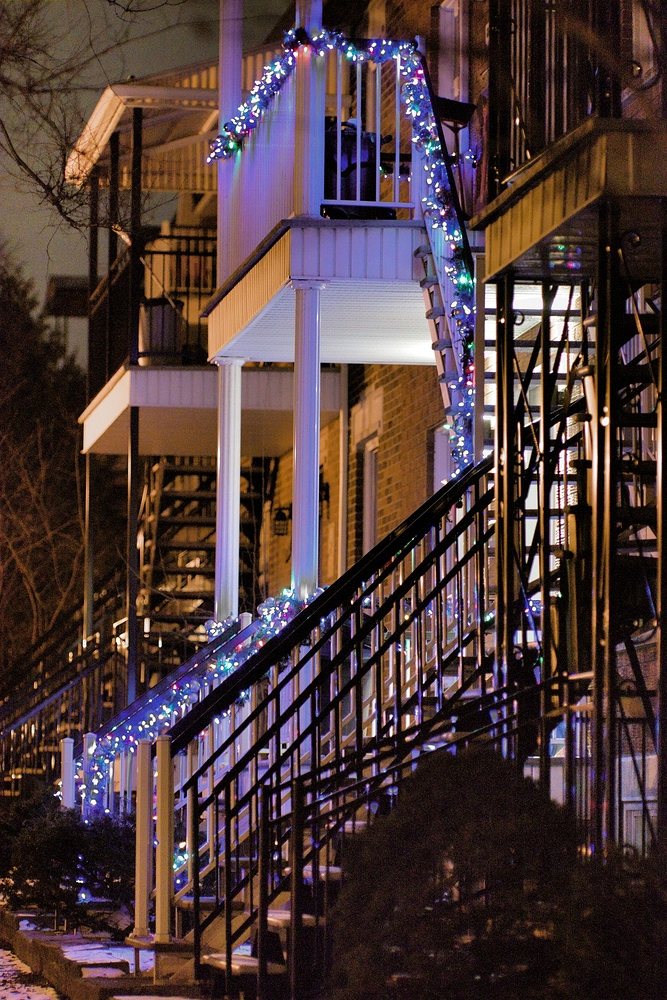 That was pretty much the worst case scenario you could encounter : max ISO, sort of back-lighting, 3 light sources with different white temperature, among which the infamous LED blue that is such a PITA no matter the software you are using.

Still, we managed to get everything under control in 9 steps, using “only” 7 modules. Unrolling the corrective editing first, then the creative editing, in a step-by-step fashion, we can get a better control over the picture, and come back later to any step without messing the whole stack.

Notice I didn’t use any sharpening/local contrast enhancement since the base raw has 36 Mpx shot with a prime lens and I wanted a soft Christmas postcard.

26 Likes
Dealing with out of gamut colors (and filmic)
out of the box RAW rendering not up to JPEGs
filmic option is gone
Filmic creates black artefacts in highly saturated area
Clarity in darktable
Out of gamut colors, matrix, hsv
rawfiner January 16, 2020, 5:42pm #2

We still need to deal with those out of gamut blues. There is a trick I took from theACES, which involves applying a custom RGB matrix to force those blues back. Unfortunately, the ACES coefficients expect an ACES P1 colour space, and darktable pipeline works in Rec 2020 by default, so the coeff will need to be adjusted.

Just tried this on several hard-to-process images that have very blue light… and it does wonders!

Thank you for this tip!

nice. could you maybe share the raw file? thanks!

Ok, the blue light channel mixer thing is amazing. I have a concert photo (that I will probably make a PlayRaw of at some point) with very bright blue light, that Lightroom just, I don’t know, dealt with… It made it work and I havent been able to do the same with darktable.
I have toyed around with putting the channel mixer in the pipeline before the input profile. It felt like a very ugly hack, but it did work a bit. And now with these values it’s perfect!

Of course, Lightroom has sliders in the ‘camera calibration’ tool that allow you to adjust the hue/saturation of the primaries. I think this is more or less the dt equivalent of that.

(on a related note: they should make LED theatre lighting illegal.)

I have also experienced problems with blue spotlights in darktable. I have found that in Rawtherapee, if you use the dcp profile for the camera, the picture ‘just works’ as in Lightroom (although I don’t have a copy of this to try) but if you use the standard camera profile, you experience the same kind of strange problems with colours as in darktable. I am, guessing that if the colour profile is slightly out then colour extremes go out of gamut and so the channel mixer needs tinkering with. Just my guess, somebody may have a better explanation.

if you use the standard camera profile, you experience the same kind of strange problems with colours as in darktable.

what camera is that? maybe RT just lacks a proper DCP profile for it.

Panasonic Lx100. There isn’t a dcp profile listed in RT so I stole a dcp profile from Adobe dng converter to get colours that look like the OOC jpeg. The RT standard ones don’t look too bad though slightly duller, sometimes I prefer them.

We still need to deal with those out of gamut blues. There is a trick I took from theACES , which involves applying a custom RGB matrix to force those blues back. Unfortunately, the ACES coefficients expect an ACES P1 colour space, and darktable pipeline works in Rec 2020 by default, so the coeff will need to be adjusted.

The ACES Blue Light LMT is meant to be applied to AP0. Not AP1. It comes from this thread: https://acescentral.com/t/colour-artefacts-or-breakup-using-aces/520

I think so (but anyway, I made my own preset already).

The ACES Blue Light LMT is meant to be applied to AP0. Not AP1. It comes from this thread: https://acescentral.com/t/colour-artefacts-or-breakup-using-aces/520

Right. I know AP1 is very close to Rec2020, but I never found the actual primaries (and the white point is D60, I think). If anyone can find me the RGB <-> XYZ primaries, then it’s just a matter of adapting the coeff with a bit of linear algebra.

If anyone can find me the RGB <-> XYZ primaries,

I just pulled DT today and your “for Dummies” posts are great - you get great results and you’re able to explain your process. QUESTION: Is filmic another downlod that I’m going to want?

All modules are included within darktable itself. Check your version - if you have 3.0, you should have module named “filmic rgb”.

Thank you @aurelienpierre for posting the article. I got pretty good results following your recommendations on challenging images without humans in them. However I find it hard to do not let skin tones ‘blend in’ if there are people in such pictures. I will keep practicing though. Thanks again.

Don’t hesitate to use masks to isolate people in difficult situations.

Thanks you @aurelienpierre. Is it possible to have a link to the raw file to practice ? Very nice job. Thanks a lot.

Thanks a lot. Tried it and got great results instantly. Learned more about dt in a few minutes than reading through the tutorials for weeks.

In that ACES code, they supply a matrix to go from AP1-to-XYZ:

So, if the blue-correction matrix is:

But this is significantly different to the coefficients you gave:

So where did I mess up?

So, to derive a set of coefficients suitable for REC2020 colour-space, we need to transform from REC2020-to-AP1, apply the correction matrix, then transform from AP1-to-REC2020 again, right?

The method is quite simple: